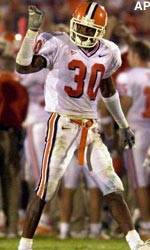 Clemson, S.C. — Woody Dantzler will be in a yellow jersey today at practice and will be limited in what he does. He is expected to be back at practice in a full capacity on Tuesday and is expected to start at quarterback against Georgia Tech on Saturday.

SEATTLE, WA (10/23/00) — After falling behind 17-0 to North Carolina and Heisman Trophy candidate Woody Dantzler on the sidelines with an injury, somebody on No. 2-ranked Clemson’s offense had to step up.

Senior wide receiver Rod Gardner did just that. The Jacksonville, Fla., native caught seven passes for a school record 182 yards and three touchdowns to lead the Tigers to a 38-24 come-from-behind victory over the pesky Tar Heels.

Gardner has been named this week’s Rivals.com National Player of the Week.

Georgia Tech has a 42-20-2 lead in the series with Clemson dating back to a 23-0 Tiger win in Augusta, GA in 1898, just the 11th game in Clemson football history. In fact, Clemson won the first four games of the series, including games in 1902 and 1903 when John Heisman was at the helm. Clemson defeated Georgia Tech in Atlanta 73-0 in 1903 with Heisman as head coach. Heisman then moved to Georgia Tech and defeated Clemson two years later (1905) by a 17-10 score.

The first time Georgia Tech played in Clemson’s stadium was 1974, a 21-17 Clemson victory. Clemson has a 9-8 advantage in the series, regardless of site, since Georgia Tech joined the ACC in 1983. Clemson had a four -game winning streak over Georgia Tech snapped in 1997 when Tech won in Atlanta, 23-20 in a game televised by ESPN.

Clemson’s last win over the Yellow Jackets took place at Clemson in 1996, a 28-25 Tiger win. Nealon Greene clinched that game with a one-yard run with just 4:10 left.

Last year’s game was a three-point decision, but it was not decided on a late score. Travis Zachery scored on a one-yard run with 6:58 left to cut the deficit to 45-42. Clemson got the ball back, but a Woody Dantzler to Mal Lawyer pass in the Georgia Tech endzone was broken up by Chris Young and Georgia Tech ran out the clock to gain the win.

The two teams combined for 87 points and 965 yards of total offense. It was the first game and still only game in school history in which both teams scored in the 40s. Clemson made two major comebacks agains tthe 13th ranked Yellow Jackets. Woodrow Dantzler replaced an injured Brandon Streeter with the Tigers trailing 7-0. Tech improved the margin to 21-0 before Dantzler got the Tigers going in the right direction with a 17-yard touchdown pass to Pat Cyrgalis. Dantzler took Clemson to 28 points in the second period and the score was tied at 28 at intermission.

Clemson then trailed 45-28 in the fourth period before Dantzler led Clemson to twofourth quarter scores. Joe Hamilton led Tech with 410 yards of total offense, most ever against Clemson. He was 22-30 for 322 yards and five touchdowns, and rushed for 88 more on 19 attempts. Tech was 11-17 on third-down conversions.

Dantzler had a big game for Clemson with 305 yards of total offense, 185 passing and 120 rushing. Travis Zachery added 86 yards rushing and three touchdowns. Chad Carson had 15 tackles apiece for the Clemson defense, while Robert Carswell added 14.