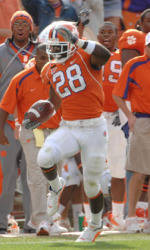 Clemson, SC — Clemson’s football team had a top 25 national finish on the field and had its highest fall semester on record in the classroom in the fall of 2007. Tommy Bowden’s Tigers had a team GPA of 2.53 for the fall semester, the program’s top in-season GPA in history. Overall, it was the third best semester for the program on record. Bowden has now been the head coach for each of the top eight semester GPAs on record.

“I am proud of the team’s academic performance this past semester,” said Bowden, who just finished his ninth season at Clemson. “With the time demands of meetings and practice, it is obviously much more difficult to be successful in the classroom during the season. The help we have received from the staff at Vickery Hall has been outstanding and they are to be commended.”