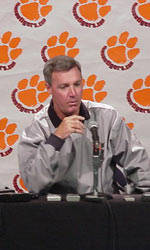 Emphasis for 2002 class Anytime you go into a recruiting year there is a plan as far as specific numbers that you have and needs that you have. Overall, we went into this year with South Carolina being a primary state along with Georgia, North Carolina and Florida. We felt like we went in with offensive line being a big need for us. We signed five this year. All five we signed are qualified (from a test score standpoint), so we thought that was pretty critical getting those guys.

In-State recruiting We felt like last year Kelvin Grant was the one we needed to pinpoint and go after and we got him. We didn’t feel like there was a quarterback here in the state that we were comfortable with. Reggie Merriweather is the top running back in the state and we signed him.

Signing high-profile recruits In this profession closing is a big deal and you’ve got to be able to close on some key guys. We felt like within the last week that Chansi Stuckey and Justin Miller were three guys that you just try to get one. If you get one of them, you feel pretty good. Kelvin was a pretty heavily recruited guy who fell our way. Chansi was the 5A Player of the Year in Georgia and then Justin Miller was a top guy. Jeff Francoeur was another Player of the Year in Georgia with baseball capabilities. He’s another smart, tough player who we felt pretty good about.

Early commitments I think Irvin Brisker committed early and stayed strong with his commitment. He was recruited by most of the schools in the southeast. When guys commit like that early, some of them lose their luster and some of their stars drop.

Recruiting under sanctions I think every coach would be happy today because it was a difficult year. We had one of our top recruiters off the road for a year, which hurts you. A lot of Roman Fry. To pull a guy out of the state of Ohio a week before signing day with Ohio State sitting there and the coach that’s recruiting for Ohio State played for that high school, that’s a pretty good job. When you take one of your guys off the road, you’ve got to pick up some slack somewhere. We had two G.A.’s that did some great phone work. The NCAA won’t except self-imposed penalties unless they do damage. If they don’t do damage, it’s like you’re mocking them.

Jeff Francoeur He’s another guy that will have an opportunity. He’s the player of the year in the state of Georgia. He’ll have some opportunities to come in on defense and play. I think [his situation] depends on the Major League Baseball Draft. Roscoe [Crosby] had a strong desire to play college football. He could have been a first rounder but said, ‘No, I want to play (football).’ I think Jeff has a pretty strong desire to play right now but he won’t be eating in front of George Brett or whoever for another month. A lot of coaches don’t like two-sport athletes. It’s never bothered me. I think guys that are interested in playing two sports have more of a comfort zone knowing we’re pretty honest in what we do because the recruiting process can get kind of sticky.

Signing Gaines Adams Steve Taneyhill [former USC quarterback] did a good job for us. I sent him an IPTAY card but he tore it up and sent it back.