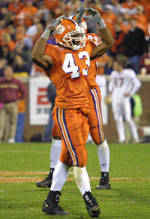 Clemson, SC – Anthony Waters had 11 tackles and running backs Yusef Kelly, Reggie Merriweather and Duane Coleman combined for 156 yards on the ground to highlight play in Clemson’s football scrimmage on Saturday at Death Valley. It was the final stadium scrimmage for the Tigers prior to next Saturday’s Orange and White game. That contest will conclude Spring Practice for Tommy Bowden’s team. It will kickoff at 1:00 PM at Death Valley.

“The defense showed improvement today,” said Bowden, who will start his sixth season as Clemson head coach on September 4 when the Tigers face Wake Forest at Death Valley. “The defense did not allow many scores and that was good to see. I was disappointed in the goal line work, however, as the offense continued to win that battle. And, when we practiced come out off the goal line, the offense got a first down every time. That aspect of the game is mental toughness and we need to improve in that area on defense.”

Offensively, Bowden was pleased with the running game. “I won’t single out one running back, because I thought all of them ran well and gave good effort. That was the best our backs have played as a group from a toughness standpoint in the last two years. I also thought the receivers caught the ball well, and Will Proctor continues to show improvement. The team is developing confidence in him if Charlie (Whitehurst) goes down.”

Kelly led the ground gainers with 14-57 on the ground, while Merriweather continued his fine play this spring with 9-53 rushing. Coleman added 15-46 rushing along with a touchdown, and also had two receptions for 11 yards.

Whitehurst got off to a slow start, but connected on 8 of his last 9 passes for 100 yards. He finished 13-23 for 145 yards and one interception. That theft was an incredible athletic play by rising sophomore defensive end Gaines Adams, who leaped to deflect the ball, then caught it. Proctor completed 7-23 passes for 81 yards, including a 14-yard touchdown pass to Gerald McCloud.

The receivers were led by Kelvin Grant with 4-39 and McCloud caught 3-50 and the touchdown. Curtis Baham had 3-30, while tight ends Ben Hall and Bobby Williamson had two receptions apiece.

Waters led all tacklers with 11, while All-America candidate LeRoy Hill added eight. Eric Coleman had two tackles for loss, as did Hill, who ranked second in the nation in that category last year when he had 27 in the 13 games