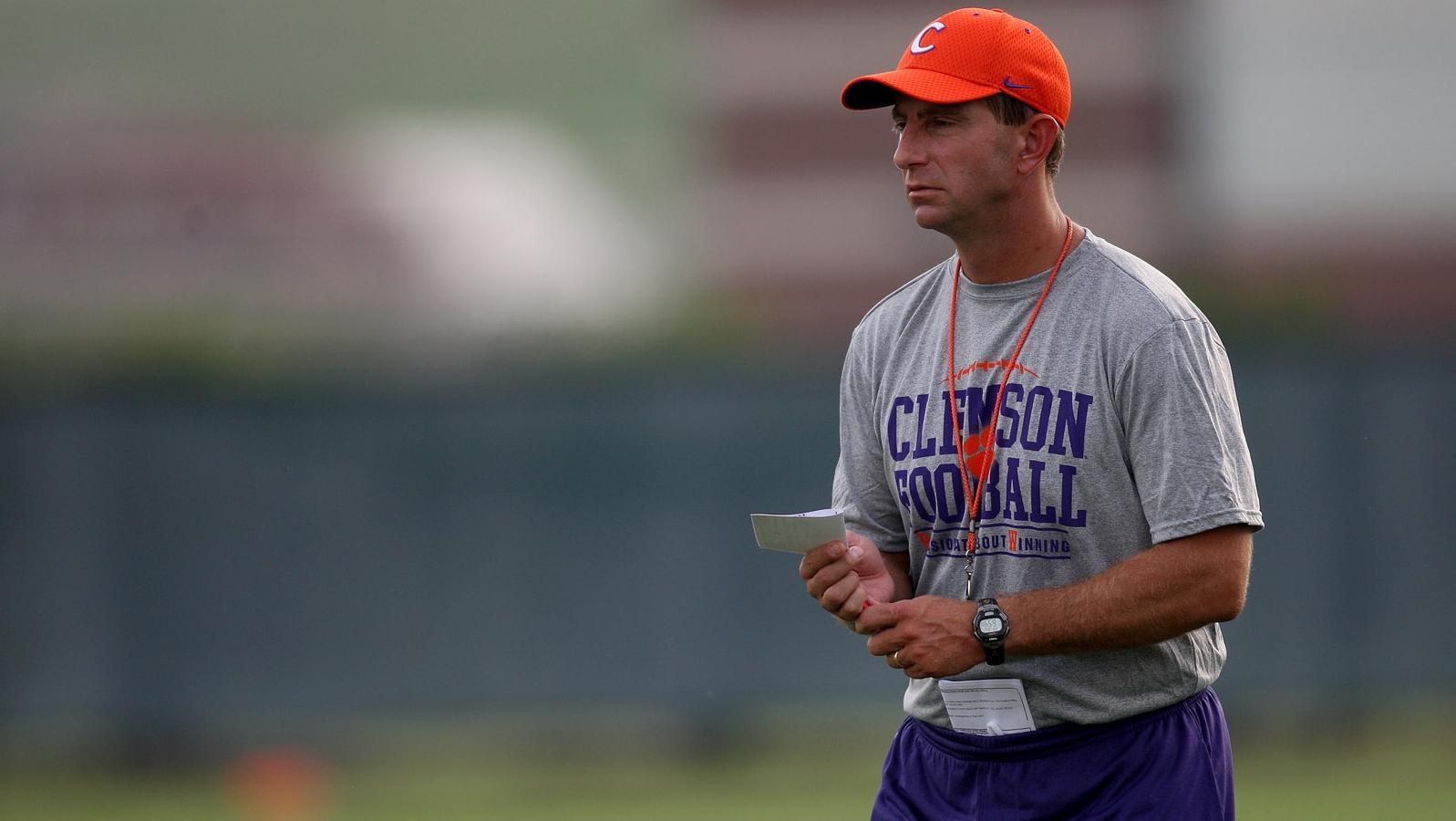 CLEMSON, SC – Clemson Head Coach Dabo Swinney saw exactly what he wanted to see as his Tigers ventured out to the practice fields Wednesday behind the Jervey Athletic Center in full pads for the first time in fall camp.

“There was a lot of intensity and they were very physical,” he said.

The Tigers spent the first part of practice inside the indoor track facility after a rain shower hit the Clemson area. When they got outside to finish, Swinney said his team competed.

“So far, this is a very workman like group,” he said. “They have really showed up. It was a good first day in full pads. It was very physical and there was good competition on both sides.”

“It looks like we are right on top (of things),” Swinney said.

Clemson’s head coach raved about defensive tackles DeShawn Williams and Grady Jarrett and has been impressed with the way they have played and the energy they bring to practice.

“If I could have a hundred of those guys, I would drive a truck, load them up and bring them back because this would be the easiest game to coach in America,” Swinney said. “If they were all like DeShawn Williams and Grady Jarrett we would not even have to come to practice.

“Those guys are what you want. They are incredibly competitive. They are very coachable and they give you every ounce of everything they have, not just on the practice field, but in the weight room, and they take care of their bodies. They are two winners.”

Injuries. Projected starting right tackle Gifford Timothy went down with a knee injury close to the end of practice. Swinney said they do not know the extent of the injury at this time.  He will have an MRI on Thursday.

“Hopefully, he will be okay. He has had a good camp so far,” Swinney said.

Redshirt freshman Joe Gore replaced Timothy in the lineup and as Swinney said, “He is coming along.”

Swinney also mentioned how well Shaq Anthony, another redshirt freshman, is coming along, though he has been playing left tackle behind Brandon Thomas.

“He is probably the most improved right now as far as coming into camp,” Swinney said. “You can tell that he has worked hard this summer. He has been very coachable. He has done a good job for us.”

Isaiah Battle, a true freshman, has also improved, though the coaches think he has a ways to go.

“The thing about him, no one is going to out athlete him once he develops his technique,” Swinney said. “He has a chance to be some kind of football player once he learns what to do. I don’t know when that is going to happen, but he is on his way.

“I really like the prospects we have at that position, but we are young. But Joe is the next guy in and then we have some other guys that can play tackle.”

Patrick DeStefano, who is projected to be a guard, can play some at tackle as well. He is a true freshman.

Freshman running back Zac Brooks injured his trapezius muscle, but Swinney thinks he will be okay. Backup placekicker Ammon Lakip is out for a couple of weeks after breaking his little toe on his right foot before the start of camp.

The Tigers will be back at practice on Thursday at 4:25 p.m. Practice is closed to the public.