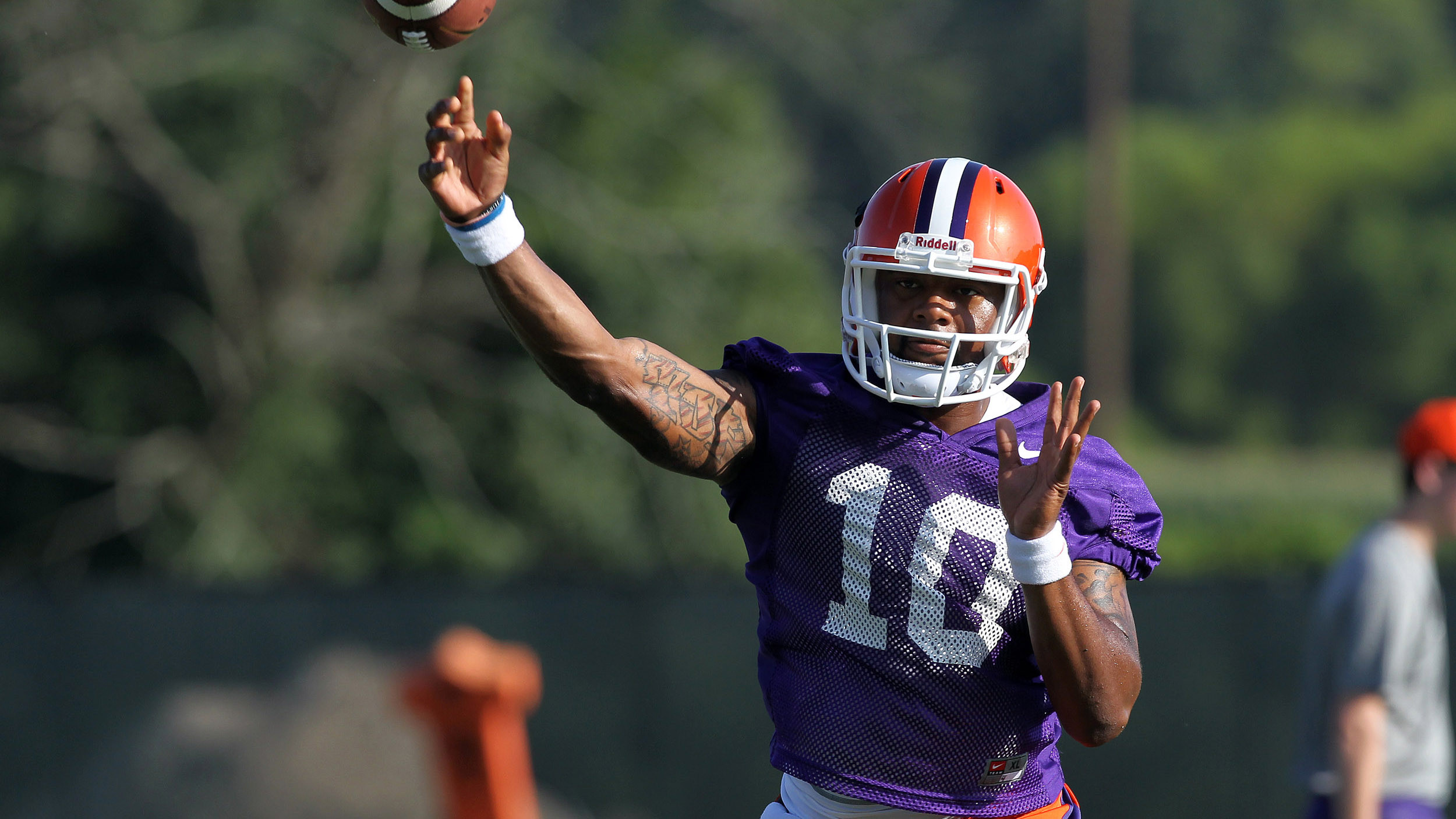 CLEMSON, SC – Clemson opened its preseason practice for the 2013 season on Friday evening at the Clemson Football Practice Facility below the Jervey Athletic Center.  The Tigers began the two and a half hour workout in the new Indoor Practice Facility with a walk-through and flex.  The last two hours were spent on the outside fields.

Head Coach Dabo Swinney welcomed 104 student-athletes to the first practice.  Just 10 of them are scholarship seniors.  Despite the youth, Clemson is ranked eighth in the nation in the preseason USA Today poll, the highest preseason ranking for the program since 1988.  Clemson finished the 2012 season with an 11-2 record and a number-nine ranking in the same poll.

“Whether we are ranked 50th or fifth we will work with the same intensity, the same effort, the same focus,” said Swinney, who is in his fifth full season as Clemson Head Coach.  “We appreciate the ranking, but we have one goal right now and that is to win the opener.”

Clemson’s first game is no ordinary opener as the Tigers will face fifth-ranked Georgia on August 31 at Memorial Stadium.  It will be the highest ranked team Clemson has faced in a season opener in 50 years (fourth ranked Oklahoma in 1963) and just the second matchup of top 10 teams in the history of Memorial Stadium at any point in the season.

Swinney was pleased with what he saw from his team on Friday, an indication of the amount of work the team put in over the summer.

“They paid the price over the summer.  Our conditioning staff led by Joey Batson and our nutritionist, Lisa Chan, did a great job with our team.  I am very proud of what was accomplished.  It showed in the conditioning numbers and our weigh-in yesterday.”

One equipment addition caught everyone’s eye on Friday.  Every player with the exception of the quarterbacks and kickers wore a protective padding called a “Guardian Cap” over their helmets.  “Danny Poole (Head Athletic Trainer) came to me this summer with this product idea and we are trying it.

“We plan to use them at every practice.  A study showed that is it supposed to decrease the contact by 33 percent and it keeps the headgear cooler.  Many other schools are using it as well.”

The Tigers worked in shorts and tee shirts for the first practice, part of the mandated five-day acclimatization period.  But that won’t slow the Tigers down in terms of practice pace and installation.  “We want to increase our tempo every practice.  That is what I am looking for, great energy during practice.

“We are installing on offense and defense more than we have in the past over the first three days. We feel we have veteran players in a lot of areas and they are ready for it.”

Clemson will hold its second of 28 preseason practices on Saturday afternoon.  All practices are closed to the public.

The annual Fan Appreciation Day will be held August 18 at Memorial Stadium at 3 PM.  Admission is free.

Only one player missed practice due to injury.  Offensive lineman Spencer Region is recovering from hip surgery over the summer. He did do some running on the side during the practice.