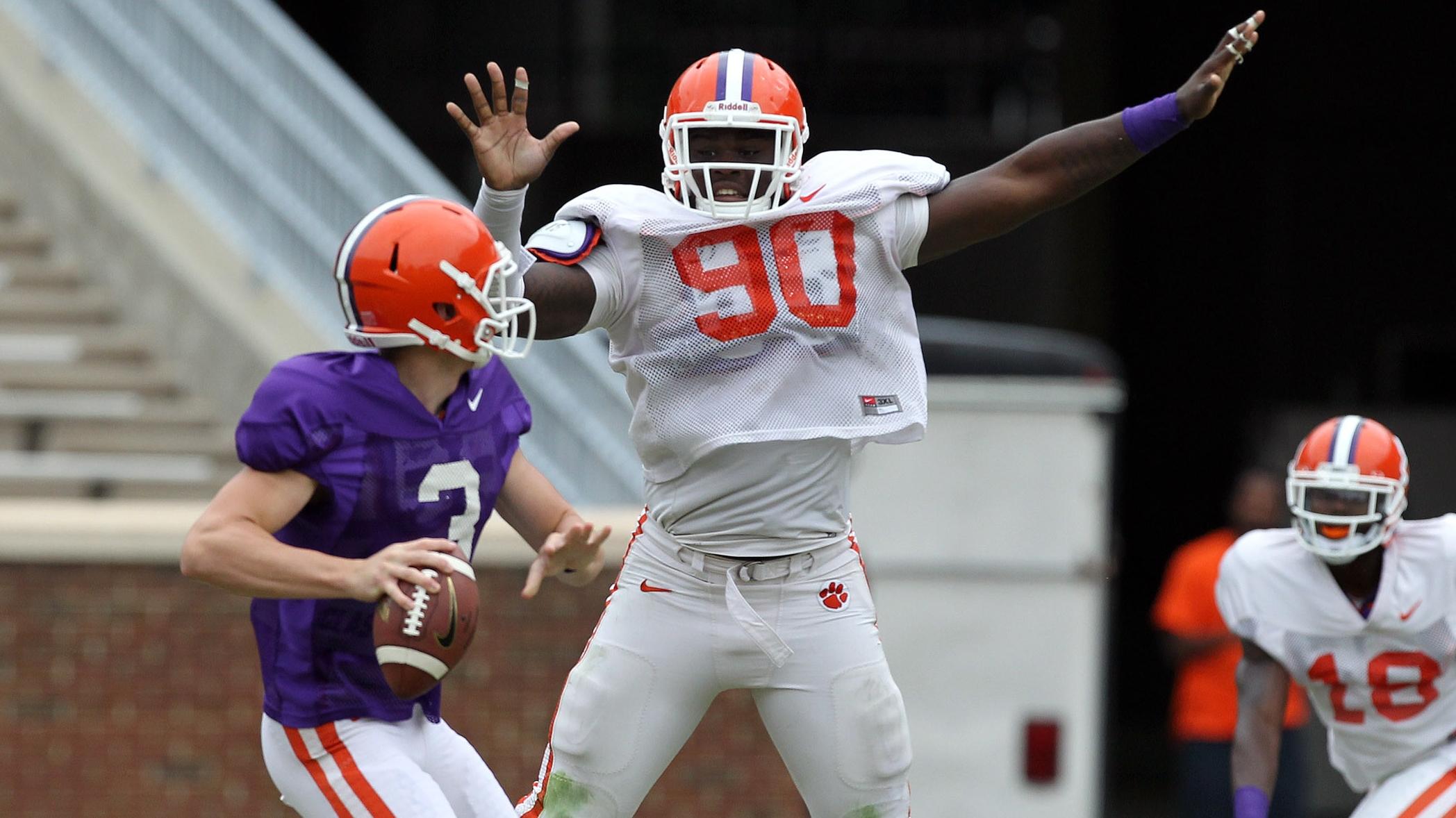 CLEMSON, SC – Clemson Head Coach Dabo Swinney said many of the true freshmen on the 2013 Tigers roster could see action this season. The diverse class that has 22 signees from eight different states was ranked among the top 14 classes in the nation by ESPN.com, Rivals.com and Scout.com.

“We have had a lot of discussion about the freshmen the last few days, and I think we have a good plan put together. I prefer to red-shirt a player unless it is obvious that he can help us win right away.”

When asked which players are obvious, he mentioned Shaq Lawson, Jordan Leggett, Jadar Johnson, wide receivers T.J. Green and Mike Williams, linebacker Ben Boulware and defensive back Korrin Wiggins.” He also said that he plans to get others ready to play.

When asked about linebacker Ben Boulware, Swinney said,”There are not many like him. He plays wide open all the time and loves to play. He sure doesn’t act like a freshman.” Boulware was the top tackler in this past Saturday’s scrimmage with seven.

Some of the other freshmen have been injured during camp and decisions have not been made on their status yet. Mackensie Alexander is one of those players as he has missed much of the preseason with injury. Defensive back Adrian Baker, running back Tyshon Dye, and defensive tackle Scott Pagano have also missed time with injury.

Jordan Leggett has a knee injury and could dress against Georgia, but Swinney does not expect him to play.

Swinney also said that tight end Sam Cooper and freshman Chad Kelly, both red-shirt freshmen coming off torn ACLs suffered in the spring game, were at practice in a green jersey today.

“They have made a remarkable improvement,” said Swinney. “It is a testament to their determination and to the work of Danny Poole and our athletic training staff. They took seven on seven reps this morning and that was incredible to see.”

Swinney said freshman Jayron Kearse was recovering from a shoulder separation suffered in the scrimmage on Saturday. It did not appear to be serious. Swinney also said that running back D.J. Howard had surgery on an ankle on Monday, while Joe Gore had knee surgery. Both were not serious operations. Howard could be back as early as Monday.

The Tigers continue practice Monday evening and Tuesday afternoon before taking a break for the first day of school on Wednesday.