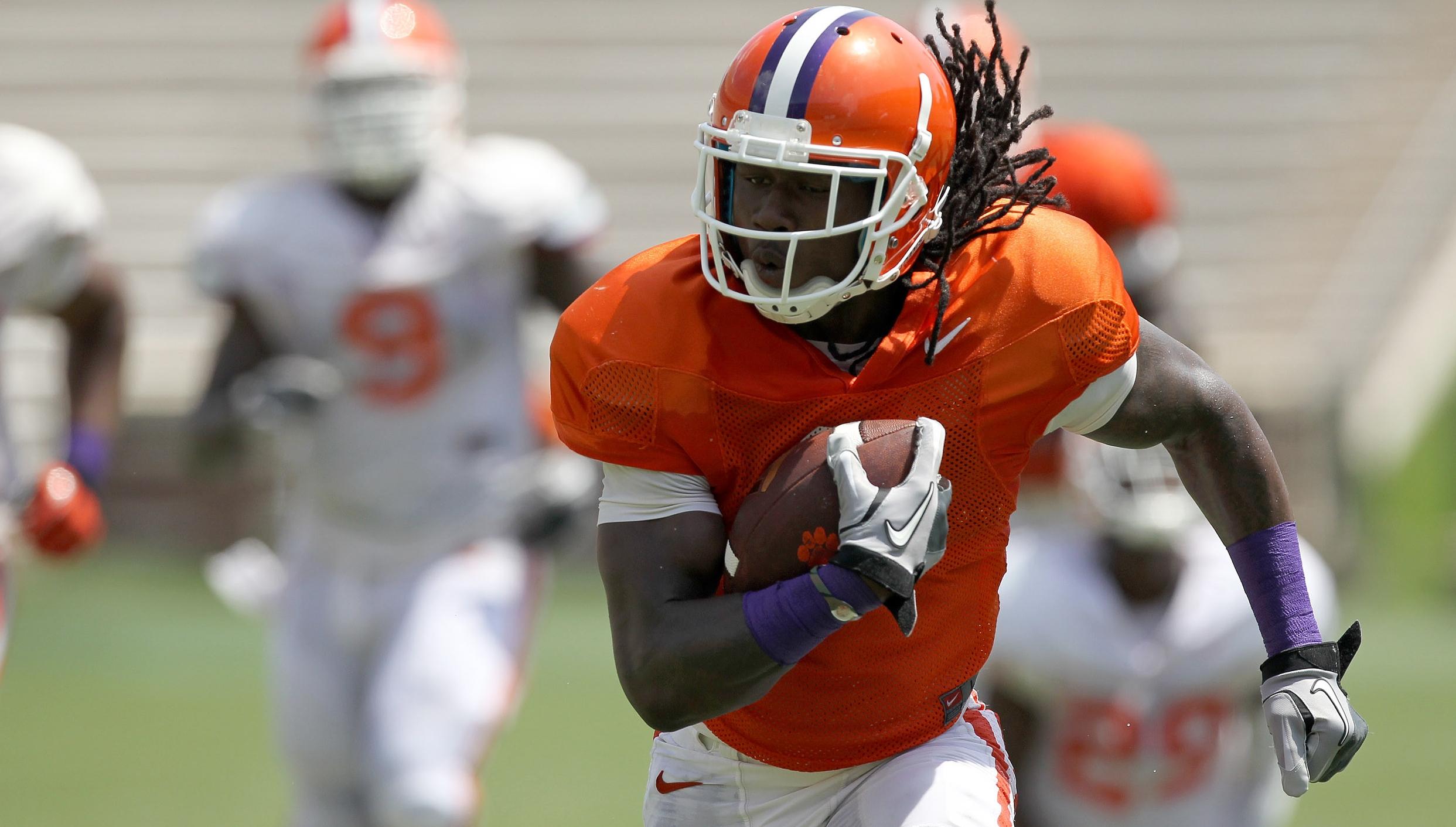 CLEMSON, SC – Dabo Swinney is pleased with the progress of his offensive line, even if they didn’t exactly distinguish themselves during the first of two practices Wednesday.

Swinney said the team has even given its O-line a nickname: “The Union.”

“They kind of move like a herd of cattle together everywhere they go,” Swinney said, “and that’s encouraging, especially when you’ve only got two seniors in the group. You’ve got a lot of guys that are going to be around here for a few more years.”

Clemson returns four of its five starting linemen from last season, but questions still loomed over who would replace the leadership of four-year starter Dalton Freeman. Swinney pointed to senior right guard Tyler Shatley as the player who has emerged, saying the former fullback and defensive lineman has “become a rock for us,” since moving to the offensive line last season.

“Last year he was kind of the new kid on the block,” the Clemson head coach said. “Even though we looked at him like a leader, he had a lot to prove and a lot to figure out, whereas now he is very sure of himself and very confident of his role, kind of like Dalton was last year. So, I’m pleased with that whole group.”

But even with four starters returning on the offensive line, Swinney said it was not a sure thing that all of those players would retain that status for the opening game, as there is a cadre of linemen still battling for spots on the two-deep.

“I think we’ve got about 12 or 13 guys that are competing pretty well,” he said, “and we’ll settle out over the next several days, as far as, ‘OK, this is what we’re looking at for the first game anyway.’ I think that competition is going to continue – at least I hope it does. I hope guys don’t get complacent and say, ‘I’m happy to be a backup.'”

The Tigers spent Wednesday morning inside Memorial Stadium doing situational scrimmage work focused on specific down-and-distances and scenarios such as inside the red zone and two-minute drills.

With his team having practiced 11 of 13 days since fall camp began August 2, Swinney said it was evident his players had “hit the wall a little bit.”

“The big thing that I’m looking for is a little more consistency in certain areas. I thought we were really poor offensively protecting the quarterback today. Cole Stoudt, Nick Schuessler and Donny McElveen took most of the reps after the first series or so. We wanted to see these other guys, and I’m really disappointed with our protection as a whole.”

Of course, as is often the case with intrasquad scrimmages, when one side of the ball struggles the other side typically has a good day, and Swinney said his defense did an excellent job of pressuring the quarterbacks.

“Corey Crawford, we didn’t block him all day,” Swinney said. “He had one of his best practices since he’s been here.”

Freshman tight end Jordan Leggett left practice with a knee injury. Swinney had yet to consult with his training staff when practice ended, but said “it didn’t look good on the field.”

With the Tigers already thin at tight end, Swinney said the coaches would have to consider moving someone over from another position – he mentioned offensive lineman Patrick DeStefano – to bolster depth if the injury turns out to be serious.

“Darrell Smith has been awesome and is probably as important as Tajh (Boyd) right now to our offense,” Swinney said. “We’ve got to keep Darrell healthy and ready to go. He is that important to what we do, in everything, running the football.

“Stanton Seckinger is developing and coming on, and Jay Jay McCullough has never played… I like the players we’ve got, but I’m concerned about our depth. Hopefully Jordan is not serious, and we can get him back and then keep bringing Sam Cooper along. We’re going to need him as soon as possible.”

Both Cooper and red-shirt freshman quarterback Chad Kelly suffered ACL injuries in the Spring Game and had surgery in early May to repair the damage.

Swinney said both were ahead of schedule in their recoveries, and he hopes to have them back by Oct. 1, if not sooner.

“Maybe September sometime,” he said. “They have just poured themselves into the rehab. They have responded incredibly. They are cutting and planting. It’s amazing to see where they are right now.”

“He’s moving around pretty good, and hopefully he’ll just continue to get a little bit better each day,” Swinney said.

Clemson signed eight defensive backs in its most recent signing class, and Alexander is one of those the team hopes will be able to contribute immediately.

With the process of integrating those young players, along with minor injuries to a number of the veteran ones – most of whom have returned to practice – Swinney said the defensive backfield still has a ways to go before the season opens August 31.

“Our veteran guys have performed pretty consistently,” he said. “I’ve been pretty pleased with those guys. And then a young guy like Korrin Wiggins, he is a guy that just jumps out at you. I think he has a chance to really help our football team … but we definitely have to improve consistency-wise in the secondary.

“Everybody knows that is the area of our team that needs to improve the most. We have made improvement, but we’re nowhere near where we need to be to have the caliber of team we want to have.”

The Clemson football team held its 11th practice of the 2013 preseason in Memorial Stadium on Wednesday, August 14.  The Tigers are preparing for their season opener against Georgia on August 31 at Memorial Stadium, which will be broadcast nationally on ABC at 8 PM.  ESPN College GameDay will be in Clemson for the matchup between the two top-10 teams.