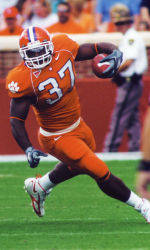 “This was the first day of two-a-days and you could see the fatigue at the end of the second practice,” said Clemson Head Coach Tommy Bowden. “It was a long day, but we had a good day. We had our first live scrimmaging in the morning with a goal line drill.”

Reggie Merriweather got the offense off to a good start in the goal line drill with a rushing touchdown and a receiving touchdown from Will Proctor on the first two opportunities. C.J. Gaddis had the top defensive play of the goal line scrimmage when he made a head on collision with James Davis that denied Clemson’s top rusher from a year ago a touchdown.

Bowden singled out some of his players after the second practice. “Crezdon Butler had a good collision in the morning practice and he has played well in the secondary. Sergio Gilliam has been hurt, but he had a good day. Will Proctor threw the ball well all day and Chansi Stuckey showed leadership at the wide receiver position. Cortney Vincent had a good day at defensive end. Rickey Sapp continues to show speed at defensive end. He plays fast and is starting to retain some things.”

Bowden also commented on the speed of freshmen C.J. Spiller and Jacoby Ford. “We continue to work both of them in the return game. There are some fast guys that you can’t put in the return game, but C.J. and Jacoby are good at it. We might have them both back there on kickoffs and punts. We saw Miami (FL) put someone back on punts with Devin Hester. It is impressive to have the fastest guys in the state of Florida each of the last two years back for you on kick returns.”

Brandon Pilgrim was the only new player in a yellow jersey on Thursday as he is out of practice until next week due to a leg injury.

Coach Bowden announced after practice that reserve offensive tackle Quentez Ruffin had left school after completing his final summer school exams on Wednesday, and intends to transfer to another school. Ruffin, a native of Tallahassee, FL and Leon High School, red-shirted last season.