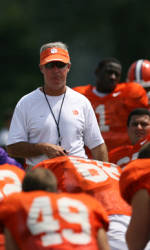 Clemson, SC – The Clemson offense made a strong comeback on Wednesday, as Tommy Bowden’s Tigers worked twice on the practice fields behind the Jervey Athletic Center. The Tigers will be back at practice once on Thursday afternoon as the squad prepares for its season opener against Florida State on September 3.

“Wednesday morning’s practice was as good as we have had this year,” said Bowden. “The defense was far ahead of the offense on Tuesday, but the offense came back strong today, especially in the offense line. Chris McDuffie has come back strong and we saw a good performance by Barry Humphries at center this morning.

Bowden said after practice that McDuffie was back at a first-team guard position. Thomas Austin is the starter at the other guard, but there is a strong battle there with senior Brandon Pilgrim.

The offensive line is still without Christian Capote, who suffered a shoulder injury on Tuesday. The injury is not serious and he should be back by next week.

All-ACC running back James Davis missed the afternoon practice after suffering a shoulder bruise in the morning practice. He should be back by Saturday’s scrimmage.

Bowden said he expects Jamie Cumbie (shoulder) and Dorell Scott (sprained ankle) are still out, but should return next week.

Bowden was happy with his team’s leadership on Wednesday.

“We had a tough three-hour practice on Tuesday, a practice that ended at 7:30 PM. We then came back in full pads on Wednesday morning and they had a terrific practice. That shows there is some leadership out there. Of course we won’t know for sure until we play a game, see a situation where we are down in the fourth quarter.”

Kicker Mark Buchholz had his busiest day of the preseason, participating in four different practices. He is playing both soccer and football at the same time, the first Clemson athlete to do that in 25 years. He practiced with the football team from 9:30 AM until 10:15 AM, then participated in soccer practice from 10:15 AM to 11:15 AM.

At 3:30 PM he was back at soccer practice for the full two hours, then returned for the night football practice from 6:00 Pm to 8:00 PM.

He booted a 37-yard field goal at the end of a two-minute drill at the conclusion of the evening football practice. In the morning practice he was successful from 34 and 44 yards in his two attempts against a live rush.