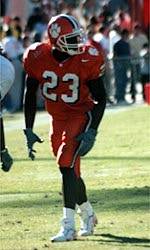 CLEMSON, S.C. – Clemson’s defense recorded 13 sacks, forced four turnovers and even scored a touchdown to highlight play in Saturday’s scrimmage in Death Valley. It was the second major scrimmage of the spring practice for Tommy Bowden’s team. The Spring Game will conclude the practices on April 15th at 3:00 PM at Memorial Stadium.

“The defense was certainly challenged this week and was dominant today,” said Clemson Head Coach Tommy Head Coach. “They made the big plays. I was impressed with a lot of the younger players today. Eric Meekins made some plays, as did Kevin Johnson. The defense put a lot more pressure on the offense.

“Offensively there wasn’t much, but Terry Witherspoon stood out. He has played well this spring and showed us some speed on a long touchdown run. Again we struggled with the kicking game and we have to improve in that area.”

The defense was dominant and the big plays were widely distributed. Safety Charles Hafely was the leading tackler with seven, including one tackle for loss and a pass broken up. Eric Meekins had five tackles, two passes broken up and returned a fumble 38 yards for a score.

Kevin Johnson was another defensive back who had a fine scrimmage. The red-shirt freshman had five tackles a pass broken up and an interception, which he returned 17 yards from the Clemson endzone. Two players had two sacks apiece, Altroy Bodrick, David Ellis and J.J. Howard. Rodney Thomas, Keith Adams and Tore Francis also had five tackles. The pressure and coverage by the Clemson secondary was a major reason the passing game picked up just 249 yards in 68 pass attempts.

The two touchdowns in the scrimmage were scored by Terry Witherspoon (50-yard run) and Rod Gardner, a 15-yard scoring pass from Woodrow Dantzler. Witherspoon was the top rusher on the day with 9-65. Dantzler had 11-51 rushing and completed 12-25 passes for 118 yards and a score. He has now thrown 57 straight passes in two scrimmages without an interception.

Willie Simmons, also in competition for the quarterback spot, completed 14-29 passes for 76 yards. Matt Schell, a red-shirt sophomore in 2000, was 7-10 for 42 yards and is now 17-26 in the two spring scrimmages. The top receiver was Kevin Youngblood with 6-34. Jackie Robinson was 5-56 receiving, including a 43-yard reception from Dantzler. The duo were high school teammates at Orangeburg Wilkinson three years ago.

On a positive front, Robert Carswell, Charles Harper and Alex Ardley all returned to practice and played in the scrimmage.