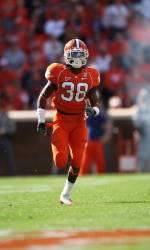 Clemson, SC – It was back to the practice fields for the Clemson Tigers on Monday night. The Tigers had a brisk 90-minute workout as they prepare to face eighth-ranked Miami (FL) on Saturday afternoon at Land Shark Stadium in Miami.

The Tigers are coming off a 38-3 win over Wake Forest that brought the Tigers to 2-2 in the ACC, tied for second in the Atlantic Division.

“It was a good spirited workout,” said Clemson Head Coach Dabo Swinney. “It was a crisp night and we had a good efficient practice. It was a good team performance last Saturday and we will need that again against Miami.

“The scout team did a good job tonight. It is critical that the scout team follow their assignments and give our guys a good representation of what they will see. Tajh Boyd threw the ball well. He gives our defense a good challenge in practice and it makes our defense better.”

Scotty Cooper, who missed Saturday’s game with Wake Forest due to a concussion suffered against Maryland, was back at practice, but limited. He hopes to return to action Saturday against Miami (FL).

Coach Swinney announced to the team after practice that starting cornerback Chris Chancellor would wear number-six at this weekend’s game instead of his regular number 38. “Chris came to me today and asked if he could wear number-six in honor of Jasper Howard, the UCONN player who was tragically killed over the weekend. He was on the same high school team with Chris in Miami. I granted that request.”

“I thought it would be a good way to honor Jasper,” said Chancellor, who played with Howard at Miami Edison Senior High School in 2003 and 2004. “I talked with a lot of former teammates and out high school coach last night. It was a very sad situation.”