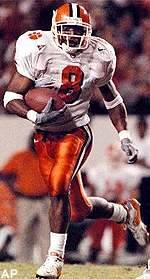 Clemson, SC – Fifteen players, including 10 players who would start the game if healthy, were on Clemson’s injury list on Monday. The list includes four players who have been ruled out of the game. The other 11 players are listed questionable at this point on Monday. An update will be issued after practice on Thursday. Clemson must travel to ninth ranked Georgia Tech on Saturday, a team that has not played since September 8th.

“I can’t remember having this many injuries, especially this early in the season,” said Clemson Head Coach Tommy Bowden. “It has really hit us hard at the wide receiver position. It could effect what we do on offense. We might have to run more three-wide receiver sets. We will just have to evaluate who is healthy at the end of the week.”

Five wide receivers are on the list. That includes Kevin Youngblood who broke his leg in the preseason and Jackie Robinson, who broke his jaw in the Virginia game. Robinson had surgery to wire his jaw shut on Monday. He will be out at least four weeks. As a result of Jackie Robinson injury, first-year freshman Airese Currie will move into the starting lineup.

Other wide receivers on the injury list are Roscoe Crosby, who has a sprained knee, Matt Bailey, a pulled hamstring, and J.J. McKelvey, who also has a sprained knee. Crosby was hurt in the Wofford game on September 8 and has not played since. Bailey and McKelvey were injured against Virginia.

Starting tackles Nick Eason and Jovon Bush also did not practice on Monday. Eason suffered a sprained ankle against Virginia and played just five snaps. Bush played most of the game, but suffered a bruised foot. Bush was on crutches on Monday. As a result of the injuries on the defensive line, Bowden moved first-year freshman offensive tackle Eric Coleman to the other side of the ball at defensive tackle.

Eric Meekins suffered a pulled hamstring in the Virginia game. Braxton K.Williams has been moved to first team free safety.