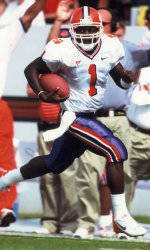 ESPN has grown to almost too many networks to count since its inception in 1979. From an instant classic involving the most exciting college football game of the weekend on ESPNU, to a Sports Century showcase on ESPN Classic, the number of shows that highlights awe-inspiring performances and great athletes are just a click away on your remote control.

Since Clemson played its first football game on October 31, 1896 (a 14-6 win at Furman), there have been many great plays and great performances. While there will always be debate among Clemson faithful about what is the greatest performance on the gridiron by a Tiger, almost all will agree that Woodrow Dantzler’s show against N.C. State in 2001 would have to be at or near the top of any list.

Dantzler, a native of Orangeburg, SC, had already had many games to remember in his two-plus seasons as Clemson’s starting quarterback before the game against the Wolfpack. Just two weeks prior to the game in Raleigh, he had scrambled for 11 yards in overtime to give Clemson a 47-44 win against #9 Georgia Tech in Atlanta. In that contest, he rushed for 164 yards and passed for 254 yards (418 total yards) against the #9 Yellow Jackets. Following that contest, he was named national player-of-the-week by USAToday.com.

While that performance against the Yellow Jackets is certainly one to remember, the game against N.C. State on October 13, 2001 is one to never forget. Playing against a Wolfpack squad that featured future NFL Pro Bowl quarterback Philip Rivers underscored the importance of scoring early and often. The Tigers, with Dantzler at the controls, did just that in their 45-37 victory.

The day started well for Clemson, even before kickoff. When the Tigers took the field in pregame warmups on a day that was perfect for football, Clemson was wearing purple pants for the first time in the modern era. With the performance displayed by Dantzler that sun-drenched October afternoon (23 carries for 184 yards and 23-27 passing for 333 yards), it was clear that he more than enjoyed donning the purple pants. He accounted for an ACC record six touchdowns, four passing and two rushing.

Wolfpack Head Coach Chuck Amato summed it up best following the game when meeting with the assembled media.

“I can’t imagine there is a better player in America than Woody Dantzler,” said Amato. “We must have set a record for missed tackles on him alone. He really put on a show today.”

After the game, Amato met Dantzler at midfield and told him, “You are the best player in the nation.”

Early in the game, Dantzler got the scoring underway on a 55-yard scamper (pictured above). The play is still easy to remember for Will Merritt. Now a member of the Clemson radio broadcast team and a four-year letterman (1998-01) on the offensive line for the Tigers, he can still remember the play like it happened yesterday.

“I had one of those rare plays in my career that I did exactly what I was supposed to do,” said Merritt. “I pulled to the weak side and had a `pancake’ block on a linebacker. I heard the Clemson crowd and thought that Woody had run behind me and the play had worked perfectly. I looked up and saw him going down the opposite sideline.

“That summed up how the entire game went. No matter what play was called, Woody made a play. As an offensive lineman, Woody made you look good whether you were doing what you were supposed to do or not. There are not too many Woody Dantzler’s that come along.”

Tommy Bowden, who guided the Clemson program from 1999-08, still remembers the effort Dantzler displayed against N.C. State. In that game against the Wolfpack, Dantzler surpassed 4,000 career passing yards and 2,000 career rushing yards, the first player in ACC history to accomplish the feat.

“Woody had an unbelievable game that day,” recalled Bowden. “It seemed like everything we dialed up worked. You have to give credit to Woody. They could not stop him. He made so many plays. Woody was the type of player who you believed if you could keep getting him at-bats, a home run was going to come. He hit some that day.”

Dantzler, who earned his marketing degree before his senior season, had a career of hitting home runs for the Tigers. He still holds the Clemson single-game record for total offense for his performance in Raleigh. In fact, the top-three, single-game individual bests are all held by Dantzler.

When Clemson takes the field today against N.C. State, it is safe to say that Head Coach Dabo Swinney would like to dress out #1 against the Wolfpack. With a day like he had against them in 2001, it would become an ESPN “Instant Classic.”