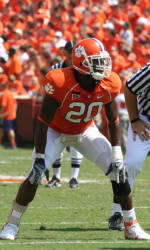 If one asked Tramaine Billie 15 months ago what he would be doing in 2007, they would be pretty sure his answer would not be “Clemson Football.”

Billie came into his “first senior season” with NFL-caliber athleticism and a drive to have a great year.

However, sometimes life can throw you a curveball. In Billie’s case, his plans drastically changed on August 16, 2006 during a preseason practice. He broke his right ankle and was out for the entire season. He was allowed to take a medical red-shirt for the 2006 season, knowing that he would have another year to showcase his talents.

Even though he knew he had a second chance at a senior season, it was quite hard to watch on the sidelines as his fellow teammates took to the field. That was especially the case at the end of the year when he and fellow injured senior Anthony Waters could have made a difference in some close losses.

“I wanted to step up and be there for my team during my senior season,” stated Billie. “It was really hard for me to watch from the sidelines, knowing I couldn’t get in the game. I knew I still needed to step up and be a leader, so I gave my teammates advice and motivation to deliver big plays on defense.”

Billie would always give players advice on how to read the offense and help teach different defensive strategies during the games. Although injured and unable to play, he was still a presence on the field. He stepped up to his duties of being a leader on the team without his pads on.

“Tramaine is a smart defensive player and teammates respect his advice,” said Nick Watkins, also a starting senior linebacker alongside Billie in 2007.

Billie is no stranger when it comes to being a defensive force for the Tigers. He is determined to make big plays and get his teammates motivated to have an improved 2007 season. So far, that seems to be the case, as the Tigers are ranked #20 in the nation entering today’s game.

From a young age, he has displayed this determination to succeed.

Raised in Columbia, SC, Billie was always involved in athletics. In a family that included two sisters and a brother along with his parents, he experienced a lot of support from his family when it came to athletics.

“My mom was my #1 fan,” #20 said. “She was always very involved, always coming to all my sporting events to support me. My mom has made the biggest impact on my life. She is always making sure I’m doing the right things.”

“I never had a break between sports in high school,” remembered Billie. “I enjoyed going from season to season, because it allowed me to find what sport fit for me and what sport I would pursue at the collegiate level.”

Football eventually became the winner, thanks in part to his versatility, as he played on both sides of the ball in high school.

“I played linebacker my ninth and 10th-grade years, while I played running back during my junior and senior years,” Billie stated. “I became more excited about football in the 11th grade, and I started to realize my potential. I knew that if I worked hard enough, I could earn a college scholarship.”

Billie was quite an impressive athlete in high school, showcasing his speed and agility. He set a school rushing mark at Dreher High School with 4,073 yards and 43 touchdowns after only two years at running back. He was an all-region pick and was a North-South All-Star game selection in 2002.

Along with these football accomplishments, Billie was a presence on the track. He was the AAA state champion in the 100m in 2002, and he was named team MVP in 2001 and 2002. His speed and quickness from track certainly helped him excel on the gridiron.

“Without the support of my football coach and Coach Bacon, and my track coach, Coach Brooks, I would have not realized my potential,” Billie admitted. “They always pushed me hard so that I could accomplish the goals I set for myself.”

After an accomplished high school career, Billie knew he had to make the transition to the college ranks. He was recruited by South Carolina, the school right in his backyard, and made a verbal commitment to the Gamecocks. However after thinking about his decision, Billie decided that it would be in his best interest to attend Clemson instead. He also felt comfortable in the Clemson atmosphere.

“I knew I wanted to be close to home, but I didn’t want to stay in Columbia, so I decided that Clemson was the school for me,” said Billie. “The small-town atmosphere enabled me to focus solely on football and school without any outside distractions.”

On his first day on the field, Billie was not nervous or intimidated by the veteran Tigers. He was excited and ready to make an instant impact on the squad. When asked by Head Coach Tommy Bowden if he wanted to play on defense, he jumped at the opportunity to avoid a red-shirt. His transition went smoothly due to his earlier experience at linebacker. Even though Billie is typically smaller than most linebackers, he always plays bigger than his size.

As a true-freshman in 2003, he played nine games with 72 snaps. He was one of just two first-year freshman defensive players to appear in a game. He had five tackles on special teams and 14 tackles from his linebacker position behind starter Eric Sampson. He had a season-high six tackles in 10 snaps against Georgia Tech in his first collegiate game. He had a very productive freshman season overall, learning the “ins and outs” of college football.

“I had a lot of fun during the 2003 season, especially at the Peach Bowl against Tennessee,” exclaimed Billie. “The Peach Bowl was by far my most memorable bowl game.”

During his sophomore year in 2004, Billie became a huge defensive force. He was fifth on the team in tackles (62), including nine tackles for loss, which tied for third-best on the team. He was also regarded as one of the top open-field tacklers on the squad, because 44 of his tackles were registered on first hits.

Billie had a season-high 10 tackles in the win over N.C. State and was honored as Clemson’s defensive player-of-the-game by the coaching staff. He also had a caused fumble in the overtime victory over Wake Forest and an interception against Georgia Tech during the second game of season.

Billie later contributed seven tackles in the overtime victory at #10 Miami, FL in the Orange Bowl. He finished the season with an exceptional performance against South Carolina. In the victory over his hometown team, he had two tackles for loss and a sack, as the Tigers trounced South Carolina 29-7 in Death Valley.

From game-one of the 2004 season, coaches and spectators knew from Billie’s performance that he was a special talent. Although younger than most veterans on the defense, he understood the game and made very few mental mistakes. He started the last six games of the 2004 season, and his move into the lineup paralleled Clemson’s strong finish, as the Tigers were 5-1 in those games.

During his junior season in 2005, he had 93 tackles at strongside linebacker, the third-best total on the team. He had a career-high 13 tackles in 55 plays against #25 Boston College and seven stops in the victory over #16 Florida State. He also added 12 tackles against #19 South Carolina. Therefore, he had a combined 19 tackles against two top-20 teams during the 2005 season.

After having two outstanding seasons for the Tigers, 2006 looked to be a promising senior season for Billie. But the aforementioned broken ankle ended that dream. He had to red-shirt in 2006, but due to the fact he played as a true-freshman, he had another year to showcase his talents.

“I’m not going to lie, it was hard for me to grasp the fact that I wouldn’t be playing the entire season,” admitted Billie.

His injury was the first of many that plagued the Tigers last season, as he was joined on the sidelines at times by Waters, Chansi Stuckey, Michael Hamlin, Rendrick Taylor, and Roman Fry.

Once healed, Billie looked to this season to come back and make an immediate impact. His determination, patience, and courage from last season’s ankle injury allowed him to face adversity head on and come back for another strong season.

Billie is back in full stride, and he is ready to finish his second senior season with outstanding performances. With the help of fellow teammates Cortney Vincent and Watkins at the other starting linebacker positions, Clemson’s defensive is ready to take on any opponent.

“Tramaine is not only one of my best friends, but he is also a great linebacker to play alongside,” said Watkins. “He might be small for his position, but it never shows in a game. His speed and quickness to get to the ball and make a tackle is very impressive.”

After his time at Clemson, Billie plans on fulfilling his goals of playing on the professional level. Even though he is undersized, he shows his immense heart by playing bigger. His undying passion for the game and drive to succeed will only help him to work towards his goals.

Billie knows that there will always be setbacks in life, but he understands that he must be a strong person and get through the hard times to experience the good things that are destined for him.

Brittney Earle, a sophomore from Easley, SC, is a student assistant in the Clemson Sports Information Office.