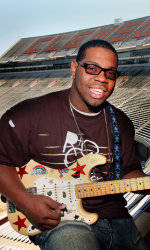 This past summer, if someone had asked me the question, “What player on the Clemson football team has the closest relationship with his father?” I would have given a quick answer…Da’Quan Bowers.

The previous year, Larry Williams of TigerIllustrated.com had authored a feature about Bowers and his musical interest as a guitarist in his father’s gospel band, “The Legendary Singing Stars.” Bowers had joined the band three years ago when an opening was created when longtime lead singer Tommy Ellison passed away.

“My dad had played in that band since he was 19, and that was really the only job he ever had,” said Bowers. “It was his profession. From the time I was about six, I played the guitar when I wasn’t playing sports.

“When the opening came, I talked with my dad about it and told him I would like to play when I could. Everyone said I sounded just like my dad.”

Bowers began performing with “The Legendary Singing Stars” on the weekends during the offseason. That included the summer of 2010 when the group toured all over the country. In late July, someone sent me a picture of Bowers with a Clemson fan who attended one of the concerts in Montana. Bowers, dressed in his purple suit, had a big smile on his face.

The weekend road trips, or summer week-long excursions, did nothing but make a strong bond between father and son (both pictured above in pink) even stronger.

“I learned a lot from my dad,” stated Bowers. “He instilled the importance of having a strong faith in God. The music we played did that with our fans as well. You could see the positive effect it had on our audience. It gave me a great sense of pride that I was a part of a group that was entertaining and helping people at the same time.”

Rob Reichley of Raycom Sports became familiar with Bowers’ story. In June, Reichley contacted me to do a story about Bowers and his participation with the band. He came to Clemson in July to film an interview with Bowers and made plans to travel to one of the band’s concerts.

After reviewing his staff’s schedule, Reichley decided he could go to their concert near Columbia, SC in late July. It would be his last chance, because Clemson would start football practice the next week, so Bowers would have to put his guitar back in its case until the winter.

Raycom Sports filmed the entire concert and captured behind-the-scenes interaction with Bowers and his father, Dennis, along with the other members of the band.

Unfortunately, it would be the last time they performed together. On August 7, just a few days after the beginning of preseason practice, Bowers received word that his father became ill prior to a performance in Florence, SC. He got in his car that Saturday night and drove straight to the hospital.

When he arrived, he was told that his dad was resting comfortably, and doctors believed he had pneumonia.

Satisfied that Dennis was doing fine, Bowers’ other siblings and his mother returned to their home in Bamberg, SC. Instead of making that drive to Bamberg and then traveling back to Clemson the next day, it was more time efficient to stay at the hospital that night with his dad.

Therefore, that is what he did. Father and son spent most of the night talking, sharing moments about their family, friends, the band, and Bowers’ goals for the season.

But in the morning, Dennis suffered a seizure. With his son by his side, Dennis passed away that Sunday morning.

Head Coach Dabo Swinney received a phone call shortly thereafter. “We were preparing to go as a team to a church service that morning,” said Swinney. “That was news that really hit the team hard, because so many of the players knew Dennis Bowers and everyone was aware of how close Da’Quan was with his father.”

Swinney and other coaches flew to Bamberg that night to be with Bowers. Six days later, most of the team attended the funeral.

“I talked with Ben Ramsey, who had recently lost their dads,” said Bowers. “They helped me through the process.

“I was so excited to see the team at my dad’s funeral. Nothing ever touched my heart like that.”

Bowers was away from the team for nearly two weeks, but when he came back, he was ready. He had already gone through a summer of refocusing his energies towards having a great junior season.

“I have dedicated this year to my dad,” Bowers proudly stated. “We had many talks on the road this past summer about being in the best shape to improve my quickness and doing all the little things to have a great season in 2010.”

Bowers is following through on that. He leads the nation in sacks (9) and tackles for loss (15.5) this season.

Bowers thinks about his father every day and often watches the video of their final performance together.

“God works in mysterious ways. It is amazing to think I have a video of our last performance together. That is something I will cherish for the rest of my life.

“Every time I look at it, it gives me a great feeling. While my dad passed at an early age (51), I am also more fortunate than many, because I had such a close relationship with him.”