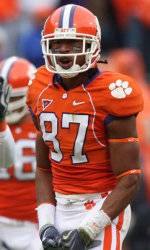 Growing up in the small town of Cheraw, SC, Terrance Ashe, also known as “T.A.” to his friends and teammates, was a multi-sport star. He excelled not only on the football field, but also on the baseball diamond at Cheraw High School. In fact as a junior, he helped lead the Cheraw High baseball squad to the state championship after an all-region season on the gridiron.

Ashe had a breakout season on the football field as a senior, when he scored 10 touchdowns, made the all-state team, and helped Cheraw High School win its first lowerstate title in 17 years. But even after this breakout senior season, Ashe still did not receive any scholarship offers. He had some contact with Coastal Carolina, Newberry, and Tusculum, who thought he would make a good walk-on, while a few Division II schools contacted him for baseball.

Knowing that he was going to have to walk on at any school he chose, Ashe decided to follow in the footsteps of his older brother and walk on at Clemson. Phillip was a walk-on defensive back for the Tigers when Terrance was in his youth. It was not only his older brother that led Ashe to Clemson.

“Academics are very important to me and Clemson is a great academic school with great traditions, fans, and community,” stated #87. “The family atmosphere is exactly what I was looking for.”

When Ashe arrived on campus, he knew he had his work cut out for him. He red-shirted in the 2006 season, working to get bigger and stronger while learning the playbook.

As a walk-on, you do not get many favors, especially when the head coach (Tommy Bowden) and the wide receiver position coach (Dabo Swinney) were both walk-on wide receivers in college.

Ashe continued to work hard preparing for the 2007 season. He performed well in the Spring Game and continued his tireless efforts, not only in the weightroom, but also in the film room to prepare his body and his mind to play at this level.

His opportunity would come on special teams to start the 2007 season. Then an injury to Jacoby Ford against Virginia Tech allowed Ashe to step into the spotlight on offense. He played 46 snaps and caught five passes for 44 yards against #14 Virginia Tech. The reception total was a record for a Tiger walk-on receiver. Ashe went on to grab two more receptions that year and finished the season with 16.5 knockdown blocks.

When the 2008 season rolled around, Ashe was once again behind a healthy Ford on the depth chart. In the season-opener against #24 Alabama, he was quickly back in the action after an early injury to Ford. He caught three passes against the Crimson Tide and their top-10 secondary. Ashe himself was soon injured and forced to miss three games.

Entering the 2009 season, Ashe knew that he had to take his game to a higher level and he worked hard, starting four games for the Tigers, including the ACC Championship game against #12 Georgia Tech in Tampa, FL. For the season, Ashe caught 11 passes, tied for fifth-most on the team. More importantly, he led the Tigers’ receiving corps in knockdown blocks on many occasions, clearing the way for teammates like C.J. Spiller to make big plays and reach paydirt.

His hard work on and off the field led to the coaching staff awarding him with the Hustle Award for the 2009 season, a coveted honor amongst the coaches and his teammates.

With the loss of top offensive players, such as Spiller, Ford, and Michael Palmer, Ashe will now be relied on to be a key contributor and leader of the offense. In the true mentality of a hard worker and a walk-on, Ashe went to work in the spring and won the Strength Training Award for receivers in spring practice.

A humble individual, Ashe stated that the team’s goals are paramount to his personal success. “The success of this team comes first and the main goal is to win the ACC Championship.”

Ashe credits his success to hard work and the guidance and encouragement of another former walk-on, his former position coach and now head coach, Swinney. “Coach Swinney has inspired me in many ways. I can only hope to touch other people’s lives the way he has touched mine.”

Swinney shared the same sentiment for Ashe. “He is our putty guy, because you can put him anywhere on the field. He is one the smartest guys on the field, and he makes plays anywhere you put him.”

In a year that many say the Tigers have lost too many skill players from last season, some believe the names will just change and the Tigers will continue to score points at a record rate. Kyle Parker believes that is the case.

“Terrance Ashe is a player,” stated the Tigers’ starting signal-caller. “He makes plays every day. You can rely on him to make the catch when the ball is thrown his way.”

Being a leader is very important to Ashe, whether that means making plays, showing the way, or teaching and motivating his teammates. Ashe is one of 11 original walk-ons on the 2010 team who have since been awarded a scholarship. He is on pace to join Ben Ramsey as the only walk-ons in the 2010 class to letter four times.

A true leader both on and off the field, Ashe graduated with a degree in history in May of 2010 and plans to continue his football career after this season as a professional or as a coach to help other players reach their dreams. He credits Clemson and the people he has met here for shaping him into the man he is today.

“I cannot imagine being anywhere else,” Ashe admitted. “I am so blessed to be a graduate of Clemson University.”