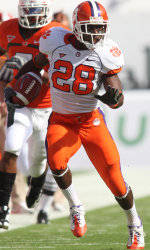 I had to laugh when I read the wire-service story about the New England Patriots’ victory over the Buffalo Bills in September. During the account of the game, it stated that Bills’ rookie C.J. Spiller had scored a touchdown on a reception and on a 95-yard kickoff return, the first Bills’ player to do that since December 19, 1965 when Charley Warner accomplished the feat against the New York Jets.

It had not taken long for Spiller to challenge the research staff of the Bills’ media relations department. I had faced those challenges on an almost weekly basis the previous four years.

If I had one word to describe Spiller, it would be “unique.” From a records standpoint, his accomplishments were unprecedented in terms of all-around performance. Off the field, he represented the Tiger football program and Clemson University in a way that made even the highest-ranking university officials proud.

As a result, Spiller will be honored today as just the third Clemson football player to have his number (#28) retired. He will join Banks McFadden (#66) and Steve Fuller (#4) as the only football players in school history with that distinction.

It is an honor that he will cherish for many reasons.

Those who know Spiller already consider him to be humble. That is one of the reasons he will be remembered as perhaps the most respected Clemson athlete of his generation. It is that depth of character that was the biggest reason Head Coach Dabo Swinney recommended that his #28 never be worn again. No one coach or player associated with Clemson has a better understanding of Spiller’s impact on Clemson.

“From the day he signed with Clemson, when he put that Clemson hat on at the press conference at his high school in Florida, with all those Florida and Florida State fans in the audience, he has made a difference at this university,” said Swinney.

“When he signed with Clemson, he sent a message to other great players that Clemson is a great program, a program where you can succeed at the highest level. His accomplishments tell future recruits that you can come to Clemson, have a great career, compete for championships, graduate, and be a top NFL player. From that standpoint, C.J. will be an ambassador for Clemson University for a long time.

“When you retire a number, it has to be a no-brainer. That must have been the case with Banks McFadden and Steve Fuller years ago…just look at what they did. Retiring #28 was a no-brainer. Dr. (Terry Don) Phillips and I did not have a long meeting on the subject.”

Spiller’s no-brainer resumé is considerable. Over his career, he established 33 school records, including six ACC records. His career total of 7,588 all-purpose yards is nearly 25 percent more than the previous best in ACC history. He accumulated 2,680 of those yards as a senior in 2009, another league mark.

He scored 51 touchdowns in his career, most in school history and third-most in ACC history, but 21 of those 51 scores were of 50 yards or more. The ACC does not keep such marks, but it is 13 more than any other player in Tiger history. It is also more than former Heisman Trophy winners Tim Brown and Desmond Howard accumulated.

Many of those 21 touchdowns of 50 yards or more were dramatic, ESPN Play-of-the-Day clips that brought national attention to the Clemson program. You can go on YouTube.com and see them many times over.

It all started at Boston College in 2006 when Spiller took a swing pass from Will Proctor and criss-crossed the field 82 yards for a score. Ironically, his first NFL touchdowns also took place in the Boston area in his third NFL game against the New England Patriots.

Spiller took seven kickoff returns “to the house” during his Clemson career, including four as a senior. The seven career kickoff returns for scores is an NCAA-record total, and his eight total kick or punt returns for touchdowns tied an NCAA record.

In December of 2009, the Lake Butler, FL native finished sixth in the Heisman Trophy voting. The only other top-10 Heisman candidate in Clemson history was Fuller, who also finished sixth in 1978. In April, Spiller was the #9 overall pick of the NFL draft by the Buffalo Bills.

Spiller had an outstanding career in a Tiger uniform in his first two-and-a-half years, but he really flourished once Swinney became the leader of the Clemson program in October of 2008. Swinney has had a positive effect on Spiller’s career since he first recruited him in 2005.

“Coach Swinney has had a great influence on my career,” said Spiller. “The first time I saw him, I said, `Who in the world is this skinny guy trying to get me to leave the state of Florida?’

“But we had a great relationship from day-one and it went beyond football. He is family to me, because he taught me so many lessons about life. You could see he would be that type of person from the early part of the recruiting process. You could tell he was honest and there was no sugar-coating of anything. That was something I was looking for.”

While Spiller was serious about wanting to play in the NFL after his playing days were over in Tigertown, he was equally serious about earning his degree, which he achieved in just three-and-a-half years.

“It always meant a great deal for me to get my degree,” said Spiller. “That had a lot to do with me coming back to Clemson for my senior year. It feels great right now to be in the NFL, knowing I have accomplished that part of my life.”

Spiller gives credit to the staff at Vickery Hall, who works with the football players. That group is led by Academic Advisor Wayne Coffman. However, when asked about the people who helped him during his time at Clemson, the first person he mentioned was Academic Advisor Maria Herbst.

“I have to give a lot of credit to Maria Herbst,” said Spiller. “I wanted to spend a lot of time working on my academics on Sundays, because that was our day off and I could give it my full concentration.

“She used to come in and help me most of the day on Sundays. She had her own family and didn’t have to do that. I can’t tell you how many Sundays she came to Vickery Hall to help me with a paper or prepare for a test.

“It was a motivation to me. If she was going to come in and help me on Sundays, I was going to get the work done. When you talk about the Clemson Family, that is a perfect example.”

With Spiller, every task was seemingly accomplished in spectacular, record-breaking fashion. That included his graduation.

When Spiller crossed the stage on December 17, 2009 to receive his diploma, the Clemson Board of Trustees stood and applauded. It was done spontaneously and led to an even bigger ovation from his fellow students and the near-capacity crowd in Littlejohn Coliseum. It is something the Board of Trustees had done for a student just once before (for a student who had dealt with Cerebral Palsy a decade ago).

“That is a moment I will never forget,” admitted Spiller. “I have a lot of pictures from football, but that is a picture I will show my kids one day.

“That might be the best honor I had in my Clemson career. It told me the university, not just the football team or program, had respect for what I did and that they appreciated my character and how I represented the school.”

Today, Clemson graduate C.J. Spiller follows the Tigers from afar in Buffalo, where he is off to a good start, ranking among the leaders in the NFL in kickoff returns. A recent trade of another player will make Spiller even more involved in the Bills’ offense as the season progresses.

“I have been able to watch two Clemson games so far. It is tough watching on television, because you want to be out there. I text Andre (Ellington) and Jamie (Harper) all the time. They have bright futures. That is one thing I wanted to do last year…teach them all I could so they could carry on the tradition.”

That tradition will carry on for many years to come. And at the top of the list will be the impact left on Clemson University by #28, C.J. Spiller.