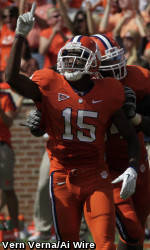 With an open field next to your house, you are likely to grow up playing in it every day. For the Sensabaugh family, the sport of choice was football. Coty Sensabaugh grew up in Kingsport, TN playing football with his family and friends every afternoon after school. He enjoyed playing football so much that he knew he would continue to do so as he grew.

After playing organized football from the time he was five, Sensabaugh flourished on the gridiron at Dobyns-Bennett High School and was named all-state as a wide receiver and conference defensive player-of-the-year. He finished his senior season with 48 receptions for 915 yards and 14 touchdowns on offense along with four interceptions on defense.

Sensabaugh was also selected to play in the Tennessee-Kentucky All-Star game. It was not only on the football field where Sensabaugh excelled. He also led his basketball team deep into the playoffs his junior and senior years and was selected to the East-West All-Star game following his senior season on the hardwood. He played on the same AAU team as former Clemson sharpshooting guard Terrence Oglesby and was a member of the track team as well, participating in sprint and relay events.

Clemson was the only Division I football offer Sensabaugh received.

“I enjoyed my visit here and I wanted to prove everyone wrong who thought I could not play at this level,” said Sensabaugh. “My family has always been there for me and I wanted to make them proud.”

When Sensabaugh arrived on campus for the 2007 season, he red-shirted. He worked hard to prepare his body for the collegiate level and studied the game.

“I am a student of the game, so I enjoy watching others and learning different techniques to become a better player.”

Sensabaugh has not had to look far for a role model on the field, as Gerald Sensabaugh of the Dallas Cowboys is his cousin. They often talk to discuss the game and most of all encourage each other to be the best players they can be.

In 2008, Sensabaugh made an impact as a reserve defensive back and a special teams starter. After sitting on the bench in the season-opener against Alabama, he appeared in the final 12 games, including nine on defense. He recorded his first interception in a victory over Duke in Death Valley, a game that saw him play a season-high 21 snaps at cornerback.

In 2009, Sensabaugh made the play that he considers his most memorable in a Tiger uniform. In the 40-24 victory over Florida State, he intercepted current Minnesota Viking starter Christian Ponder.

“It was an amazing feeling to intercept that pass and help my team win the game,” he explained. “My family was at the game, so they were able to experience that moment with me.”

That victory played a key role in the Tigers winning the ACC Atlantic Division for the first time in school history. That season saw Sensabaugh appear in 10 games on defense for a Tiger point-prevention unit that finished in the top 25 in the nation in many statistical categories.

The 2010 season saw Sensabuagh start in the secondary for the first time. He started three games and appeared in all 13 for the Tiger defense. He made an immediate impact, intercepting a pass in the season-opening win over North Texas. Sensabaugh had his most well-rounded game in a victory over #23 NC State in Death Valley, as he recorded three tackles, a tackle for loss, and a pass breakup of a Russell Wilson pass on the Wolfpack’s final play of the game to secure the Tigers’ one-point victory.

With the drafting of Marcus Gilchrist and Byron Maxwell into the NFL, it was known that Sensabaugh would be one of the players the defense relied on in 2011. He has stepped up to the plate and has been a factor in virtually every game. Entering today’s game against Wake Forest, Sensabaugh has 29 tackles, one tackle for loss, and a team-tying-high six pass breakups in 608 snaps, 101 snaps more than the next-closest Tiger on defense.

Sensabaugh has one interception on the season, and it could not have occurred at a better time. With #19 Auburn in the red zone late in the game trying to mount a comeback, Sensabuagh made a diving interception over his shoulder to secure the victory. The win snapped Auburn’s 17-game winning streak, the longest in the nation at the time, and helped Clemson to its first victory of the season over a ranked team.

As the 2011 season continues today, it would not be shocking to see Sensabaugh in on a big play to help the Tigers to victory, something he has had a knack of being a part of during his time as a Tiger.

When Sensabaugh takes the field at Death Valley today for the final time as a Tiger, he will have the opportunity to run down the Hill with a chance to clinch the ACC Atlantic Division title for the second time. As his time in the orange & white comes to a close, he is thankful for the time he has spent with his teammates at such a great University.

“Words cannot describe what this season has been like,” he said. “It has been a blessing to watch this team come together. It will be sad when it comes to an end.”

When it finally comes to an end after the bowl game, Sensabaugh will focus on the next stage of his life, one he hopes will continue to involve football. Having already graduated from Clemson in May with a degree in communication studies, he will begin to train for the NFL draft.

Most importantly, Sensabaugh wants to continue to influence those around him to not only be better players, but to be better people and make a positive impact in the world around him. When he finally departs Clemson, he would like to be remembered as a football player who gave his all to this university, but more importantly as a leader and someone who worked hard to be a blessing to everyone he encountered.