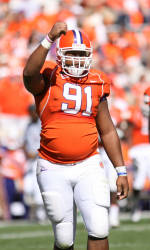 A 13-3 loss at Georgia Tech on September 29, 2007 was a disappointing one to Tiger players, coaches, and fans alike. Clemson had multiple opportunities that sun-drenched afternoon in Atlanta against the Yellow Jackets, only to come up short in a game that the Tigers had countless chances to gain victory.

While the loss itself was certainly a stinging one, the emotion displayed by defensive tackle Rashaad Jackson in the locker room following the contest set the stage for the type of leadership that will be counted on during his senior campaign in 2008.

But Jackson suffered a knee injury during preseason practice, so his contributions will be in a leadership role until at least midseason. It is a big loss because Jackson was listed as a starter entering 2008 and he had more career tackles for loss than any other active Tiger.

But his leadership contributions through September and October will be vital as the Tigers try to win their first ACC Championship since 1991.

It should come as no surprise that Jackson is at the forefront when leadership is mentioned. He has displayed a can-do attitude and the willingness to lead ever since stepping on campus in 2004.

For Jackson, the thought of providing leadership, both on and off the field, at a major university is much wider than the distance of 90 miles that separates his hometown of Union, SC from the Clemson campus. During his time in high school, he had his doubts that he would ever play football at the highest level in college.

“I was not recruited by many schools coming out of high school,” recalled Jackson. “I did not have the size that most coaches look for and almost everyone doubted that I could qualify academically.”

Jackson’s height was an issue with some college coaches. But taking a look at the three-year starter from Union High School, the greater issue was his difficulties when it came to taking standardized tests used to gain admittance to college.

The reason for his challenges became clear when he was diagnosed with Attention Deficit Disorder. That diagnosis allowed him to be eligible to matriculate to Clemson as a freshman in 2004 instead of first attending a preparatory school or junior college.

Tiger Linebacker Coach David Blackwell, who recruited Jackson, predicted early on that he would be successful at the college level.

Since stepping foot on campus, the work ethic displayed by Jackson has been evident for all to see. From his success on the field (team defensive rookie-of-the-year in 2005) and off the field (ACC Academic Honor Roll member in 2006-2007 with a GPA of over 3.0 both semesters), Jackson has been the perfect example of what hard work can accomplish.

Jackson’s position coach, Chris Rumph, who like everyone involved with the Tiger program has been impressed with his hard work in the classroom, is just as pleased to have a player with the ability of Jackson.

Jackson has played 37 games during his career, including 12 starts. He registered seven tackles for loss in 2007, giving him 16.5 for his career.

“Rashaad brings so much to our team,” said Rumph. “He is fast and active with a motor that does not stop. There is no question he can be a tough guy to block.”

When Jackson’s name is mentioned to coaches, teammates, and administrators, his success on the gridiron is always mentioned. However, his attention to detail in academics outshines his Saturday achievements.

Rashaad Jackson. He has maximized every opportunity he has been granted and is a real success story.”

Coffman is quick to mention there is no mystery to the success achieved by Jackson. “Rashaad is willing to ask for help. If he needs an office visit with a professor, he does it. If he needs a tutor, he gets it. He is a perfect example of using all of the resources that Vickery Hall has available for all of its student-athletes.”

Jackson is like all student-athletes at every NCAA institution that are limited to 20 hours a week of organized practice. But he has no clock when it comes to being a success in the classroom.

“During my freshman and sophomore years, I spent 20-25 hours a week in Vickery Hall,” stated Jackson. “The people at Vickery Hall, from Wayne Coffman to (learning specialist) Maria Herbst, are there to help you be successful. I would have been crazy not to have taken advantage of that.”

The attention to detail in regards to academics is why Jackson was asked to speak to incoming freshman student-athletes earlier this summer. His story is one that should motivate all of them.

“I told them that they had a great opportunity in front of them, but there would be times where it will be difficult,” recalled Jackson. “The main thing I wanted them to know is that there are people at Clemson that are determined for them to be successful. But for them to be successful, they have to put in the time and hard work to make it happen.”

Head Coach Tommy Bowden views Jackson as a real success story. He also sees Jackson as an example as what hard work can accomplish.

“Rashaad is a guy that did not have all the luxuries of academic support in high school,” said Bowden. “He has taken every advantage of what our academic support staff at Vickery Hall has provided him.

“If you were to look back five years and just look at his transcript and test scores, you would say this is a kid that will not make it. But to his credit, he has made it and is an example of what hard work can accomplish. There is no way to measure heart, and he has a lot if that.”

The straight talk displayed by Jackson in regards to academics is also evident in between the white lines of the gridiron. When Clemson endured the difficult loss at Georgia Tech last season, it was Jackson who gathered the team together and told the players that they still had everything to play for. This was before Bowden had even spoken to the squad with the same message.

“My focus at that time was to make sure the guys continued to work hard and get better, even after a loss,” remembered Jackson. “It is easy to be down and point fingers. I just wanted to make sure that we were together and know we had everything to play for.”

Bowden welcomed the leadership that Jackson displayed. On a team with all types of leaders and leadership styles, Jackson has a vocal component that the head coach thinks is important.

“Football is a game of emotion,” stated Bowden. “Some guys display that in an outward fashion, which is not a bad thing. Every team needs a guy with that outward display of emotion, and Rashaad does that for our team.”

“I think leadership is very important to any team,” added Jackson. “The coaches put us in a position to win every time we step on the field, but we must have team leaders making sure things are done right when the coaches are not there or in the huddle. I think this team is blessed to have a lot of great leaders willing to do what it takes to win.”

With a roster that includes two returning team captains (Cullen Harper, Michael Hamlin), Jackson believes the 2008 senior class is ready to display the leadership needed on a team that could have as many as 10 first-year freshmen earn playing time on a nationally-ranked squad.

“The older players are here to give guidance,” said #91. “When you come in here as a freshman, your head is spinning. The adjustment to football and just being a college freshman can be overwhelming. I think the older guys on the team have been good about not just telling them what to do, but guiding them through the process. For us to be where we want to be at the end of the season, we are going to need everyone to step up.”

As the calendar turned during the summer of 2008, expectations for this squad were as high as any since the early 1990s. Clemson was a consensus preseason top-10 pick and was also tabbed to win the ACC title.

Jackson and his teammates cannot help but notice the accolades, but they also know that trophies are not awarded in August.

“All the expectations and hype can be a good motivator,” said Jackson. “But all it is right now is just `talk.’ Until we get over that hump and win a championship, it is just `talk.’ What I want to happen is that people are talking about Clemson after the season. We control our own destiny. It is up to us as a team to live up to those expectations. No one has higher goals for Clemson than we do as a team.”

When Jackson talks about the expectation for this team, he knows that Tiger fans everywhere are hoping that this is “the year.” As a 14-year-old, he got his first glimpse of the passion displayed at a Clemson home game. He had a chance to attend the 1999 season-opener against Marshall, Bowden’s first game guiding the Tiger program.

“Being from such a small town is an experience that amazed me,” said Jackson. “I can remember getting chills when I saw the team run down the Hill. It is something that I never forget. When we get on the buses now to go around to the Hill, I think about seeing that for the first time. It is hard to describe all the emotion and excitement. The fans at Clemson are great. They are ready for the game from the first time they see us until the last play.”

For Jackson, the last time he will run down the Hill and rub Howard’s Rock will come against South Carolina in late November. While that will be a time of reflection and excitement, December could be an even bigger month. Most pundits have projected Clemson as a top candidate to play in the ACC Championship game on December 6.

While that date is not a certainty at this time, December 18 is already marked on Jackson’s to-do list. That is the date he will earn a degree in community recreation management.

Rumph is already looking forward to that day. “I’m so proud of him,” said Rumph. “To see what he has accomplished is special. For him to earn that degree will mean so much to him and his family.”

Final results for the 2008 season are not known at this time. Whether the season is judged an overwhelming success is still far from being determined. But there is no doubt about the successful conclusion of Jackson’s career at Clemson, both on and off the field. He is the perfect example of what hard work and determination can lead to.

Sanford Rogers worked in the Clemson Sports Information Office from 1989-93 and now works in sales in Greenville, SC.