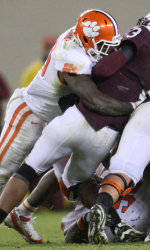 Andre Branch knew at an early age that he was meant to play football. He played his first down on the gridiron at the age of seven and flourished right away. While growing up, he played a variety of sports in Richmond, VA, however, football was his calling.

“I love playing basketball and I still play to this day, but football was and still is for me, because it allows me to play and show my emotion the most.”

Branch has quite a few influences, and these have shaped not only the man, but also the player that he is today.

“I try to do everything I do to the best of my ability for my mom, and for my grandfathers looking down on me from Heaven,” said Branch. “I want to do everything I can to make them proud with my actions, on and off of the playing field.”

Branch was dominant on the football field and on the hardwood at Varina High School. Over his final two seasons, Varina High was 20-3 and had one of the top defenses in the nation. In his senior year, Branch tallied 62 tackles, seven tackles for loss, three sacks, and two caused fumbles. He also intercepted two passes as an outside linebacker, including one he returned for a touchdown on his way to earning first-team all-district honors.

Branch followed that spectacular football season by nearly averaging a double-double on the hardwood (14 points, eight rebounds) to go with four blocks per game. He was named all-district in basketball as well.

While multiple schools recruited him to play basketball, he knew football was his true calling and he a tough decision to make. With three schools from the ACC recruiting him, the decision came down to where he felt the most comfortable. In the end, he chose Clemson over Florida State, N.C. State, and West Virginia.

“It just felt like home,” stated Branch. “I loved the coaching staff and the atmosphere at Clemson.”

When Branch arrived on campus, it did not take long for him to feel right at home. The 2007 season, one that saw Branch red-shirt, also saw him make a memory that will last a lifetime.

“I will never forget my first game, a night game in Death valley versus Florida State on ESPN. I didn’t even dress out, but it was an amazing feeling to know I was a part of the Clemson Family.”

That Labor Day matchup saw the Tigers defeat the Seminoles, one of the teams that had recruited Branch out of high school. It only solidified that he made the right decision to join the Tiger program. Four years later, he celebrated one of the best team victories of his career when the Tigers defeated the #11 Seminoles 35-30 two weeks ago.

The 2008 season saw Branch finally take the field. He appeared in seven contests for the Tigers and averaged over 20 snaps per game. He saw his most snaps (36) against Alabama in the Georgia Dome in the season-opener. He finished the season with 11 tackles, including a tackle for loss.

In 2009, Branch appeared in all 14 games for a Tiger defense that finished in the top 25 nationally in seven defensive categories. He tallied 46 tackles, eight tackles for loss, and two sacks as a sophomore.

Branch had a four-game stretch in which he had a tackle for loss in each game. The Tigers won all four games, including a thrilling overtime victory on the road at #8 Miami (FL). He also helped the Tigers to the ACC Atlantic Division title and a final top-25 ranking.

The 2010 season presented a new challenge to Branch, because he was asked to fill the starting role at bandit end, which was vacated by NFL draft pick Ricky Sapp. Then Branch showed his all-around abilities by playing a linebacker position against Georgia Tech’s vaunted running attack, helping Clemson to a 27-13 victory. He was a big reason Georgia Tech scored just one touchdown.

Branch stepped in and picked up right where Sapp left off with 55 tackles, 7.5 tackles for loss, and five sacks in 2010. He played his best against top competition, registering solid games versus Auburn, Florida State, and South Carolina.

His 2011 season and personal goals are very simple…to win a championship, but more importantly, to be a leader.

“I want to be a leader not only on the field, but also in the classroom and in the community,” said the fifth-year senior.

Branch has gotten off to a great start, leading the team in tackles from his defensive line position. Through five games, he has 34 tackles, including 11 against Wofford’s option offense and five against Auburn’s spread offense. He also enjoyed experiencing the victory over Florida State and was a big reason the Seminoles totaled just 29 rushing yards.

But it was his performance in his home state against #10 Virginia Tech last weekend that he might remember the most. In the Tigers’ convincing 23-3 win, he tied a school record with six tackles for loss and four sacks along with 11 tackles, as Clemson held the Hokies out of the endzone at home for the first time since the 1990s.

As charismatic as a person as Branch is, it is easy to see why people look up to him and want to get to know him.

“I love walking around campus and meeting new people,” admitted Branch. “We are a family here, and I want to get to know my family members.”

The Tigers hot start has a lot to do with Branch’s play and a Tiger defense that has stepped up when called upon. Clemson has already defeated the defending National Champions (Auburn), the ACC Atlantic Division Champions (Florida State), and the ACC Champions (Virginia Tech) this season.

The Tigers have faced a defending conference or division champion every game so far this season and are currently well on their way to potentially having their own championship season, fulfilling the team goal of “One Team, One Dream.”

Branch brings this charisma and confidence onto the field with him every week as well. After every play, you will see #40 moving towards his teammates to motivate them or the fans. He believes there is no other way to play the game than with the swagger he brings to every play.

“If you are not going to give everything you have on every play, there is no reason for you to be out there. It is a great opportunity to play at Clemson and I have to go as hard as I can every play, not only for myself and my team, but for the fans.”

As Branch’s Clemson career comes to an end following this season, he has one goal that is higher than the rest.

“I want to finish my sociology degree.”

A career in football is also most likely on the horizon for Branch, who is a highly-rated prospect on many draft boards (including #25 on Mel Kiper’s “Big Board”).

When asked about those rankings in a recent interview, Branch responded by saying, “Hopefully, I will be given a chance to play and pursue a career in football. It would be a blessing.”