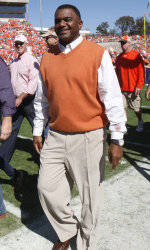 The most iconic image of Clemson’s 1981 National Championship is the picture of All-America wide receiver Perry Tuttle adorning the front cover of the first Sports Illustrated issue after Clemson’s 22-15 victory over Nebraska in the Orange Bowl.

When a reunion was held for the 1981 National Champions three weeks ago, each player was presented with a coin marking that season. The image on the back of the coin was the same picture of Tuttle from the Sports Illustrated cover.

Thirty years later, and despite the adoption of a more sophisticated passing game in the last 15 years, Tuttle is still third in school history in receiving yards (2,534), third in receiving touchdowns (17), and fifth in receptions (150).

Tuttle came to Clemson from Winston-Salem, NC, the home of today’s opponent, the Wake Forest Demon Deacons. Many of the receptions, yardage, and touchdowns Tuttle scored came against the team from his hometown.

In fact, a look to his career stats shows that he had at least one touchdown reception in each of his four seasons against Wake Forest, the only Tiger in history to catch a touchdown pass against the same school four years in a row.

“People used to think I didn’t like Wake Forest and I just got fired up to play them,” said Tuttle. “But, that wasn’t the case at all. I like Wake Forest and their players. I had great games against them, because I had so many friends and family members in the stands. During my freshmen year, it seemed like my entire high school team and coaching staff came to that game in Winston-Salem.”

Tuttle responded with his first career touchdown on a 42-yard reception from Steve Fuller.

“I remember it like it was yesterday. It was an underneath route and Steve Fuller put the pass right in my hands. It was my favorite pattern, because it put me in the open field. I made a few moves and went to the endzone.”

Clemson defeated the Demon Deacons 51-6 that day on the way to an 11-1 record and a #6 final ranking.

The following year, Tuttle had four catches for 52 yards, including a 10-yard touchdown reception from Billy Lott. It was actually an upset victory for the Tigers, as Wake Forest came into that game ranked #14 in the nation and had already defeated Auburn and Georgia.

Jeff Davis, Tuttle’s roommate, scored on a 17-yard interception return, as it would be the only game in four years that Tuttle and Davis scored a touchdown in the same game.

As a junior, Tuttle had a career-high 10 catches for 124 yards against Wake Forest, including a 22-yard touchdown reception from Homer Jordan, a score that put Clemson ahead 33-7 in the fourth quarter. Wake Forest made an incredible comeback and cut the margin to 35-33 before the Tigers earned the narrow victory.

The 1981 Wake Forest game on Halloween was another outstanding day for Tuttle, as he had seven catches for 161 yards and two scores. He hauled in a 75-yard touchdown catch from Jordan and a 25-yard scoring pass from Mike Gasque, giving Tuttle five touchdowns from four different quarterbacks in his career against Wake Forest.

Clemson has not had a scoring day like it since, as the Tigers won 82-24.

“We hit on everything that day,” said Tuttle. “They never stopped us on offense.”

When looking back on his career against the Demon Deacons, Tuttle had one conclusion.

“I felt so comfortable playing against them, because I had so many people close to me in the stands. I wanted to do well for them, the people who had raised me and my high school friends.”

His ties with the Demon Deacons continue today. Next Saturday, three hours prior to the Wake Forest vs. Maryland game in Winston-Salem, Tuttle will speak on the Wake Forest campus in a faith-based presentation.

We are sure Perry Tuttle will be just as comfortable in front of that crowd as he was 33 years ago when he was a freshman playing in the same city for the Clemson Tigers.