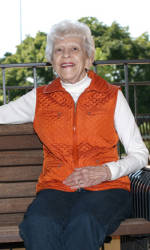 Phyllis Boyles knows a thing or two about raising a family.

A mother of 10, nine of whom attended Clemson, she regularly filled the roles of “cook, chauffeur, and ardent supporter of all (her children),” said her son Aaron.

Her nurturing spirit has reached beyond her Central, SC household, however, touching dozens of Clemson students over the past 30-plus years.

It was in the 1970s that Mr. and Mrs. Boyles decided to move their family to the Upstate of South Carolina in order to make a college education obtainable for their children. The Boyles knew that they could not put 10 children through college and they wanted the kids to be able to live at home.

Living in Texas when their oldest child neared high-school graduation, the family faced a decision. “It was a toss-up between Texas A&M and Clemson,” Mrs. Boyles admitted.

Ultimately, the choice was Clemson.

Since then, all 10 children have attended college and the seven who graduated from Clemson have earned a total of 10 Clemson degrees spread across four different colleges…engineering, nursing, education, and mathematics. From 1970-93, at least one Boyles family member was attending Clemson. That is commitment. Her son Aaron agreed.

“We’ve poured a lot of money into this place,” he said with a laugh.

Yet even now, Mrs. Boyles, who has always encouraged and supported her children’s academic endeavors, has two of her 22 grandchildren currently enrolled at Clemson.

Mrs. Boyles created more than a loving home for her children. She also provided a soft place to land for students whose families were far from Clemson, especially international students. For over 30 years, the Boyles have been welcoming friends and strangers into their home.

“My parents would often seek out international students, and it was very commonplace that they were welcomed in Mother’s kitchen,” recalled Aaron.

There was no nonsense in Mrs. Boyles’ kitchen. After all, she was accustomed to cooking for 12 every night. Also, with two of her children and one grandchild serving as members of the Clemson Cheerleading team, it was not odd for her to be asked to fix a feast for the entire squad.

There is no doubt that Mrs. Boyles’ hospitality and generosity have made a difference in many lives through the healing power of a good home-cooked meal. In the process, the Boyles family has been enriched through meeting people from different places and cultures.

Mrs. Boyles has met families from as far away as Somalia, Israel, and Korea, and she is still close with many of them. Aaron “doesn’t know how they find these folks,” but who would not want a friend like Mrs. Boyles?

She makes a point to remain in contact with those she has fed and developed friendships. She is currently waiting to hear from a friend who has gone home to Southeast Asia for the first time since the tsunami. Hopefully, the loving bonds created by a woman half a world away will buoy the heart of her friend as she steps into the aftermath of the devastating tidal wave.

As recently as last week, Mr. and Mrs. Boyles met a young couple from Turkey who were interested in the couple’s many beautiful plants. They introduced themselves and exchanged advice about gardening. Having recently graduated with a master’s degree in plant science, the young wife had plenty of gardening advice to offer Mrs. Boyles. Just like that, Mrs. Boyles proved that she had not lost her ability to make new friends. She is still awaiting a promised Turkish dish in exchange for her watermelon and persimmon tree.

After spending time with Mrs. Boyles, one cannot help but sense her humility and kindness. She admits that raising 10 children was “a big challenge,” but she made it her purpose and managed to extend her big family into the Clemson community and beyond. Mrs. Boyles has put in a lot of hard work over the years, and that does not include the years when she rejoined the workforce with seven kids still at home.

It is surprising to note that her son has entered her name for Tiger Brotherhoood Mother-of-the-Year three years in a row, but only now is she being honored for her contributions to Clemson. Mrs. Boyles certainly deserves the honor.

When asked what it means to be named mother-of-the-year, she said that it is “very exciting.” She is also ecstatic to be able to watch her Tigers play football in Death Valley. She and her husband used to attend the games regularly to watch their sons, who were on the cheerleading squad, but now she normally just watches the games on television or listens on the radio.

“It’s going to be nice to come to a game again,” she stated.

Mrs. Boyles’ advice for students today is the same as it was for her children. “Study hard and don’t party too much…you can be anything you want to be.”

The Boyles appreciate the importance of a good education, so they made sure their children would get one. The entire family worked to achieve the goal. She instilled in her children the significance of their schooling as well as responsibility, something that they certainly value now. The kids even had to hold part-time jobs.

“They had to work summers instead of running to the beach in order to help with the money situation,” Mrs. Boyles said. “It was a family effort.”

The Boyles are a Clemson-bred family. The community is lucky to have such committed and generous people in it.

Mrs. Boyles is a hard-working woman who has touched many lives, as her kindness spans the globe. She has earned her stripes as a Clemson Tiger and she is very proud to be named the 2008 Tiger Brotherhood Mother-of-the-Year. It is safe to say she has earned it.

Maddie McGlone, a freshman from Charlotte, NC, is a student assistant in the Clemson Sports Information Office.