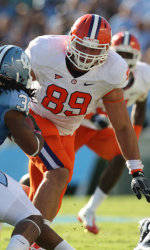 Senior Miguel Chavis is no ordinary defensive tackle. In fact, until his second year of high school, the 6’5″, 285-pounder had always dreamed of growing up to be a pro basketball player. Fortunately for the Clemson football team, his brother, whom Chavis always looked up to, gave him some good advice and convinced him to start focusing more on a career in football.

Born and raised in Fayetteville, NC, Chavis faced many challenges when he began playing football at Terry Sanford High School. One of the biggest challenges was reshaping his tall, lean, basketball player’s body in order to play football. After bulking up and playing under Coach Wayne Inman for two years, he played at Hargrave Military Academy, where he faced even more challenges.

“It was an experience to say the least,” said Chavis. “I was a 17-year-old playing against college teams. That’s when I really started to improve as a player.”

Upon graduation from Hargrave, Chavis was confronted with the dilemma of choosing which college he wanted to attend and where he wanted to play football. He did not know much about Clemson and had never visited the school, so with multiple offers from other ACC and SEC schools, the Tigers were not high on his list. However, a good friend suggested that he visit Clemson and said, “I think Clemson is the place for you.”

After being introduced to Clemson’s recruiting coordinator (DeAndre McDaniel, Chavis decided to travel to Tigertown for an official visit.

The next morning, Chavis knew he wanted to be a Tiger. “There’s not many places like Clemson,” he stated. “There’s something about these hills.”

Four years later, Chavis is in his senior football season at Clemson and is enjoying every minute of it, cherishing the time he has left in this special place. One of his main focuses as a senior is to improve his playing ability on the gridiron, something he has been working to achieve every day since he became a Tiger.

Chavis was named the most improved defensive tackle the last two years in spring practice, and as a result of this improvement, he has earned significantly more playing time each year.

In his career, Chavis has registered 66 tackles, nearly half of which were in his junior season. He has played in 38 consecutive games and missed only three games in his entire Clemson career. He played in each of the last three bowl games and earned his first career start against Kentucky in the Music City Bowl last season.

So far in 2010, Chavis has played 151 snaps with 22 tackles, leading all defensive linemen in fewest snaps per tackle (6.9). He is working extremely hard to improve on the field and continues to set higher goals for himself each week.

One of Chavis’ main goals for this season is to take his team to the ACC Championship game and capture the crown. His most vivid memory of Tiger football comes from the ACC title game in 2009. After starting the season with a 2-3 record, the Tigers won six games in a row to clinch the division title. Unfortunately, the team could not pull off a win in Tampa, FL.

“I remember Georgia Tech fans throwing oranges on the field and how much I disliked that feeling,” admitted #89. “I wanted to come back to win the division title as a senior and lead Clemson to the championship game.”

Chavis’ plans to lead the Tigers to another championship game may seem a little ambitious now, but his strong work ethic and desire to continually improve make it a reachable goal. His dedication to the football team is something his teammates admire about him.

“You reap what you sow,” said Chavis. “I’ve taken the distractions out of my life and I’m focusing on football and getting my degree.”

Chavis plans to graduate at the end of this academic year with a degree in political science. After graduation, he hopes to continue playing football at the next level. It will be a sad day for many of his teammates when he no longer plays football for the Tigers, but for now, he is focused on the present, never taking anything for granted.

“You have to be humble and realize that God has blessed you with the ability you have,” said Chavis.

In the four years that he has been a part of the program, Chavis has learned a lot more than he ever would have imagined. His work ethic and dedication will never be forgotten by his teammates and coaches, and he will never forget the time he has spent playing football at Clemson University.