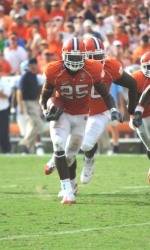 A stoplight, a Piggly Wiggly grocery store, and a Subway are the main attractions in Lamar, SC. The small town of 1.16 square miles has 1,015 residents (according to the 2000 U.S. Census Bureau). Yet despite the diminutive population, some high-profile athletes have come from Lamar High School.

John Abraham, arguably one of the most talented players to don the garnet and black for the South Carolina Gamecocks, is an alumnus of Lamar High School. The 6’4″ defensive end totaled 23.5 sacks during his career in Columbia. He then went on to be the #13 overall selection in the 2000 NFL draft. Abraham played for the New York Jets for five years and garnered three Pro Bowl honors. He currently plays for the Atlanta Falcons.

Levon Kirkland, a Clemson Hall of Famer, also hails from Lamar. The former outside linebacker entered Clemson in 1987. After red-shirting his first year, he exploded on the scene with 71 tackles. The All-American ended his Tiger career with 273 tackles, 19 sacks, 23 pass breakups, and four interceptions. In 1992, he was drafted by the Steelers in the second round. He spent 11 years in the NFL, which included a Super Bowl appearance and two Pro Bowl honors.

Like Abraham and Kirkland before him, safety Michael Hamlin is a graduate of Lamar High School and a talented football player. The defensive team captain in 2007 returns this year as a leader and motivator. However, what makes Hamlin different from the other two is that he has two younger brothers, Markee and Marquais, who are gifted football players as well.

Markee and Marquais are safeties for S.C. State, today’s opponent. As a result, when the game kicks off today, close-knit brothers will become opponents for three hours. This will mark the first time that brothers have played against each other in a Clemson game since 1981, when the Richardson’s did it. Mark Richardson was a defensive end for the Tigers, while his brother Jon played for North Carolina. Both are now working in the front office for the Carolina Panthers.

“It’s going to be different,” said the elder brother. “We’ve always been on the same team.”

So where did the Hamlin brothers’ passion for football come from? The answer is simple…their father. Michael Hamlin, Sr. played safety in high school for Michael’s rival team (Timmonsville High School). Hamlin’s father was a star athlete and still holds the state record for interceptions (5) in a high school game. As a result, it was only natural that his sons would follow in his footsteps.

Hamlin began playing little league flag football at the age of six. However, football would not be his only sport.

“I played football, baseball, and basketball,” recalled Clemson’s starting safety. “My mom coached me in basketball and my dad coached me in baseball. Basketball was my favorite sport. I really enjoyed it, and I would play basketball in the backyard with friends outside of organized sports. I felt that I was really good at it too.”

Hamlin continued playing all three sports in high school. He earned all-region accolades in football, basketball, and baseball. As a junior, he was a member of the state championship baseball team and averaged double-figures in basketball.

Despite his success on the diamond and on the hardwood, Hamlin’s favorite was played on the gridiron. Like his father before him, Hamlin played the safety position. He dabbled at quarterback and linebacker, but he wanted to play the position that put his father in the record books.

Hamlin played varsity football as a freshman and made his first start in the fourth game of the year. Lamar High went 11-4 that season and lost in the A State Championship game. Hamlin then started at both wide receiver and safety during his sophomore year, and his team went undefeated. However, it lost in the lower state championship game to his father’s alma mater.

Hamlin’s hard work and determination paid off. Lamar High School won back-to-back A State Championship titles in 2002 and 2003. Hamlin was named A Player-of-the-Year for the entire state during those two years as well as participating in the Shrine Bowl after his senior season. He totaled 23 interceptions in his career, but he never had five in a game like his father had years before.

Scholarship offers came in abundance. Clemson, Duke, Presbyterian, South Carolina, S.C. State, Vanderbilt, Virginia Tech, and Winthrop all offered Hamlin a scholarship for either football or basketball. After visits to several schools, Hamlin’s choice was an easy one.

“I chose to go to Clemson because of the atmosphere and the relationships I had with the players,” said #25. “I met Anthony Waters, Gaines Adams, Charles Bennett, Maurice Nelson, and Roosevelt Nelson during my visit. My parents liked it here too. But when I put the Clemson jersey on, I knew this was the place to be.”

Hamlin began classes in 2004 and worked on the practice squad during his red-shirt season. He became accustomed to the speed of the college game, as he gained weight and learned the plays. By the time the 2005 season rolled around, he was ready to help his team.

In the 2005 season-opener against #17 Texas A&M in primetime on ABC, Hamlin saw his first action and played 22 snaps. A few weeks later in a triple-overtime game against #13 Miami (FL), he registered seven tackles, with six being solo. Hamlin’s first collegiate start came at N.C. State, where he had eight tackles in 53 snaps. His most memorable moment would come two weeks later at Georgia Tech.

“I had my first career interception as a Tiger against Calvin Johnson at Georgia Tech,” said Hamlin. “It gave me confidence and showed that all of my hard work had paid off.”

Hamlin ended the 2005 season with 55 tackles, one tackle for loss, three pass breakups, and two interceptions for 42 yards.

With a year of experience under his belt, Hamlin had cemented himself as a valuable player. In the 2006 season-opener against Florida Atlantic, he intercepted his third ball of his career and returned it 74 yards. The following week, the Tigers played at Boston College.

With seven minutes left in the fourth quarter, the Tigers were ahead 24-17, as Boston College was driving down the field. Matt Ryan threw a pass to Kevin Challenger at the Tiger 30. Hamlin read the pass and caught the ball. The play was first deemed an interception and would have been his second in two games, but after further review by the replay booth, the play was overturned and ruled a catch for Challenger. To make matters worse, Hamlin suffered a broken foot on that play and missed the next three games.

“It was a tough time for me,” admitted Hamlin. “That play could have changed the outcome of the game. Then I found out my foot was broken. It was a bad day, but luckily I had support from my parents and friends, and I knew things would be okay.”

Hamlin recovered quicker than most and had three tackles in the late win against Wake Forest. He hauled in his second interception of the season against Maryland and added nine tackles, including a tackle for loss.

He went from 576 snaps as a sophomore to 787 as a junior in 2007. He had five first hits in the season-opener against #19 Florida State. Hamlin also had an interception in three straight games (Furman, N.C. State, Georgia Tech).

Following the Georgia Tech game, Hamlin tallied seven tackles against #14 Virginia Tech and eight against both Central Michigan and Maryland. In the victory over Duke, he recorded nine tackles, including a tackle for loss, and had his fourth interception of the season. Hamlin finished the season strong with 10 tackles against #18 Boston College and 14 against #21 Auburn in the Chick-fil-A Bowl.

On the season, Hamlin had 97 tackles, 10 pass breakups, and four interceptions. As a result, he was named permanent defensive captain, received the team’s MVP award for defense, and was a Second-Team All-ACC selection.

However in the Hamlin household, he was not the only MVP. Michael and Markee had a sibling competition over who would have the most interceptions during the 2007 season. While Michael’s mark of four interceptions was impressive, Markee tallied five interceptions and was in the top 20 in the nation at the FCS level. Markee was named the defensive MVP for S.C. State in 2007.

But Michael’s father reminds his sons that none of them have ever had five interceptions in a game.

Prior to the beginning of the 2008 season, Hamlin was named a candidate for the Jim Thorpe Award by Sporting News. Then in the season-opener against #24 Alabama in August, he tallied 13 tackles.

But those numbers pale in comparison to his performance against The Citadel a week later. Hamlin totaled three interceptions to tie a school record for picks in a game. The interceptions, which were returned for a total of 78 yards, came in a span of only 10:46 in the game. He became only the fifth Tiger in history to record three interceptions in a single game. At that rate, Michael is on track to beat his brother in 2008.

Sibling competitions do not alter the fact that the Hamlin brothers are a close-knit group. The three of them push each other to be better football players, and the results have paid dividends.

Hamlin, who received his degree in management in May, also credits his parents for his success. “They have been the biggest influence in my football career. They have always given me a lot of support and are great examples in regards to hard work. My brothers have been a big influence too. I want them to look up to me and follow in my footsteps.”

No matter what happens on the field today, the Hamlin brothers have solidified themselves as gifted safeties.