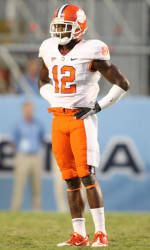 Growing up in North Carolina, Marcus Gilchrist was aware of Clemson’s existence. The Tigers recruited him out of high school along with all the usual suspects from college football’s elite that flock to upper-echelon prep talent.

A turning point in the recruiting process took place in April prior to his senior season when he came to Clemson for the Spring Game.

“The most attractive thing was coming to the Spring Game and recognizing how the atmosphere was and how the people were,” he said. “It felt like home for me. I had a sense from God that this was where I was supposed to be.”

Since that day, Gilchrist has been “All-In” with the Clemson program, and the repercussions of that decision have benefited both parties. The senior cornerback is on track to graduate with a degree in management, and the Tigers have gotten one of the most durable and dependable players in recent history.

Gilchrist has played in every game (45) of his Tiger career. The defensive back appeared in many of those contests as a backup early in his career, which was a role-adjustment that required some patience for the former blue-chip recruit.

“I had people in my life that would not allow me to stray or get frustrated with things like that,” said #12. “The amount of time that people would think it took could make the most confident person wonder. But I knew my time was coming.

“There’s an old saying…`Be ready when preparation meets opportunity.’ I made sure I stayed prepared so that when my opportunity came, I was ready to establish myself.”

Starting his career as a reserve proved to be a blessing in disguise for Gilchrist. It gave him the opportunity to learn how to be a quality defensive back from some older players who have gone on to the NFL. Former teammate Chris Clemons is starting for the Miami Dolphins and Michael Hamlin played two seasons with the Dallas Cowboys. Crezdon Butler is with the Pittsburgh Steelers and Chris Chancellor had a tryout this past August with the Cleveland Browns.

“Chris Clemons are two of the smartest players I know,” stated Gilchrist. “To be on the team with those guys and get the knowledge that they have and the way they looked at things gave me a different perspective on how to play defense. Chris and Crezdon were guys who were technically sound. You come in here thinking your technique is sound and there are guys who are just as good as you are. I learned a lot from them.”

During his first two seasons, the High Point, NC native started only one game…Dabo Swinney’s head-coaching debut against Georgia Tech in 2008. That all changed in 2009 after Swinney hired renowned defensive mind Kevin Steele to run his defense. Gilchrist started all 13 contests a season ago as a safety and said that the transition to a new defensive scheme was fairly simple for him.

“When you think about a defense, they all have the same common goals…be physical, get to the quarterback, get turnovers,” explained Gilchrist. “Those are the types of things that any given defense looks for. But whenever you have a new defense, it always takes time to understand the new concepts, as well as the way the coaches are thinking.”

In 2009, Gilchrist showed a propensity for consistently wreaking havoc on opposing offensive coordinators. He was used as a blitzer at times and caused three fumbles. He dropped into coverage often, breaking up six passes.

But above all else, the North Carolinian simply made plays. He was Clemson’s leading returning tackler this season after his 107 stops in 2009. He reached double-digits in that category four times, including 13 tackles in the ACC Championship game against Georgia Tech.

Statistically-speaking, however, there was something missing from Gilchrist’s list of accolades prior to the start of this season…an interception. That changed a few weeks ago when he recorded his first career interception on October 2 in Death Valley against Miami (FL).

While it was odd to see a veteran defensive back with more than 1,000 career snaps to his credit go without a pick through three full seasons plus a few games in 2010, Gilchrist never worried about when that initial one would come. Instead, he focused on helping out the team in other ways that are less noticeable to the casual observer.

“I feel like I’ve made so many plays outside of that,” he said. “At the next level, people recognize the other contributions that you’re bringing to the table that may not allow you to be able to have interceptions. I believed it would come sooner or later, so I didn’t really press the issue. I just want to go out there and do my job every week.”

Prior to this season, Gilchrist dabbled in returning punts and kickoffs. But this season, Swinney and Special Teams Coach André Powell have made it clear that the high school track star is at the top of the depth chart in both facets of the return game. It is a role that Gilchrist relishes, because being a big-play threat has always appealed to him.

“I grew up seeing guys like Deion (Sanders) and recent guys like Devin Hester (now with the Chicago Bears) make plays in the return game. They can change a game just like that. It’s something I take pride in.

“You have to see yourself like that. It’s the only way you allow yourself to be successful. If you don’t see yourself making those types of plays, then you’re probably not going to make them.”

Gilchrist has proven to be one of the nation’s best punt returners. His 13.0-yard average is one of the best marks by a Tiger in recent years. He also has a healthy kickoff return average that is close to 25 yards per return.

The coaching staff could not ask for more consistency or durability from Gilchrist. In addition to having never missed a game during his Clemson career, his 902 snaps in 2009 also set the single-season school record for a defensive player.

It is that dependability that has elevated the defensive back to a leadership role on the Tiger defense. Given his experience competing on top-20 units every season, the senior has learned how to successfully navigate the schedule and perform well on a weekly basis…and not just on the field of play. It is something he has now begun to pass on to younger players who are waiting for their chances to shine.

“I feel like I am a leader on defense,” admitted Gilchrist. “I think my best asset as a leader is leading by example, not just on the field. I want to be a player who you can look at off the field and say I’m getting it done in the classroom and doing the right things in the community.”

“Marcus has really turned into a leader of this team, on the field and off.”

Marcus Gilchrist has been patient. He has followed the process with a mature approach. That patience is now paying dividends.