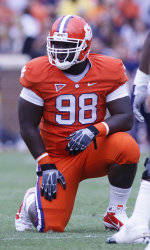 Senior defensive tackle Brandon Thompson is known by most Tiger fans as #98. However, he is known by a different name to his teammates and coaches.

“It got started during a film session one day and Jock McKissic brought up how big my thighs were and thought they looked like yams,” explained Thompson.

“Jock called me that on the field one day and Coach (Tommy) Bowden heard it. So at the end of practice, Coach Bowden said, `Just want to call out one of our freshmen for doing a good job,’ and he called me `Yams.’ The name stuck.”

No matter what you call him, one thing is for sure…Thompson is a hard-working run-stopper who tends to occupy multiple offensive linemen in order to free up his defensive teammates and allow them to make plays. More simply put, Thompson anchors a stout defensive line that creates havoc for other teams.

Coming out of Thomasville (GA) High School, Thompson was a highly-recruited prospect who was rated among the top-100 players in the nation by ESPN.com. He received scholarship offers from Florida State, Georgia, Louisiana State, Miami (FL), Ohio State, and Tennessee in addition to Clemson. However, he was most impressed with Clemson and decided to sign with the Tigers.

“Clemson was the first school to offer me a scholarship, which was at the end of my junior year of high school,” he recalled. “I came up here and met the coaches and some of the players, and I liked it. It felt like home to me, so I knew that this was the place where I wanted to be.”

Thompson entered Clemson in 2008, joining an experienced defensive line already loaded with talent. The initial plan was for him to red-shirt. However, injuries plagued the Tigers early in the season. In the first game against Alabama, Jamie Cumbie suffered a wrist injury, causing him to miss the rest of the season. This gave Thompson an opportunity to play as a first-year freshman.

“When I first got the red-shirt, it was hard to accept,” he admitted. “But, I had to do what I had to do. Then the Tuesday before the second game, Coach (Chris) Rumph called me over before practice and told me I was going to be in the lineup and they were pulling my red-shirt back, so I was excited.”

All in all, four different defensive tackles combined to miss a total of 21 games, giving Thompson the chance to play in each of the remaining 12 games in 2008. He went on to record 25 tackles, including five tackles for loss and a sack.

In 2009, Thompson was named a starter at defensive tackle from the get-go. He credits the experience he gained during his freshman season as the main reason for him getting the chance to start.

“I think it came a lot from experience from my freshman year and actually being out on the field and getting 292 snaps,” stated Thompson. “That was big for me and I knew what to expect going into the spring. I worked hard during the offseason to get bigger, faster, and stronger, and then I used the spring to work on my craft and my technique. I did everything I needed to do, and I think that showed during my sophomore year.”

Thompson also credits some his former teammates as a reason for his success. “I learned a lot from Jarvis (Jenkins). He taught me a lot, as well as the guys who came before him, like Jock McKissic, and Rashaad Jackson. They taught me a lot and I tried to take what I learned from them and use it on the football field.”

Hustle is another trait that Thompson picked up from them. “Never let people see you taking plays off. Whenever you are on the field, give it your all. If you can’t go anymore, then get out. Don’t ever stay on the field giving less than 100 percent. That’s one thing those guys taught me, and I always try to remember that.”

Thompson finished the 2009 season with 50 tackles, twice as many as the previous season, including two tackles for loss. That year, the Tiger defense finished in the top 25 nationally in total defense and scoring defense, with Thompson playing a big role in those finishes. In addition, the Tigers also made their first-ever appearance in the ACC Championship game.

“Making it to the ACC title game was big for us that year,” said Thompson. “We knew where we wanted to be at the end of the year, and then after starting 2-3, we knew what we had to do to get there. Everyone rallied and we had some great leadership on the team that year. We ended up where we wanted to be even though we didn’t get the result we wanted.”

As a junior in 2010, Thompson finished the season with 56 tackles, including 7.5 tackles for loss and a sack. The Clemson defense finished the season 13th in the nation in scoring defense and 19th in total defense, not to mention having the nation’s sack leader in Da’Quan Bowers. Clemson also held nine of its 13 opponents to 21 points or less due in large part to the play of the defensive line, which included starters Andre Branch, Bowers, Jenkins, and Thompson.

“Playing with those guys was a good experience for me,” stated Thompson. “Having all of us on the field at the same time made us one of the best defensive lines in the country. It really helped us as a team and got us where we needed to be. Now we are in a good position and are just going to continue to push forward.”

Entering today’s game, Thompson has 148 tackles in 42 career games (28 starts) along with 16.5 tackles for loss and two sacks. In three games this season, he has registered 17 tackles, including two tackles for loss. His success this year and throughout his career can be summed up by his defensive mentally.

“My goal each snap is to dominate,” said the 6’2″, 310-pound defensive tackle. “That pretty much sums it up. Each snap, I want to get out there and take control of the game. I try to think about what I can do to take control on each play, so my mentally is to do whatever I can to be the best player on the field.”

Thompson said that his favorite memory so far was beating Florida State in Death Valley in 2009. “That was a memorable game. I had a pretty good game and the energy from the fans was crazy, so that’s a game that I’m always going to take with me and remember.”

As the 13th-best player for the NFL draft by Scout.com, Thompson’s plan for after college is simple. “I plan on starting to train and work out to get ready for the NFL Combine and hopefully get a chance to play in the NFL.”

As one of the senior leaders this season, Thompson tries to show the younger players that you do not need to speak to lead.

“You don’t have to lead by opening your mouth. I’m not much of a vocal guy. I try to lead through my actions and my play on the field, and a lot of guys follow. Anyone can open their mouth, but it takes a real man to get in there and do his job.”