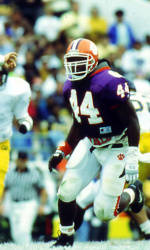 There is often a consistent pattern of achievement evident in the most successful individuals in our society.

Enter Levon Kirkland, whose steady progression of practice to perfection has helped him shake off low expectations during his youth and dominate every new challenge he has faced.

From the field of small-town Lamar (SC) High School to the glamorous turfs of the NFL, Kirkland has always made short work of becoming the very best at his job. The motivation was simple for someone who, for the most part, just wanted to be better than his older brothers. Football was a way out and a stepping stone to the next level of life.

As a result of his accomplishments, Kirkland has received many honors, not the least of which was his induction into the state of South Carolina Athletic Hall of Fame last May.

Kirkland’s first experiences with organized football came as a freshman in high school playing wide receiver, tight end, and linebacker. His natural athletic ability, teamed with a knack for learning the game, allowed him to quickly excel on the field.

The first reception of his varsity career went for a touchdown, and by his sophomore season, one of his coaches was already telling him that the door to college football was opening.

The son of a hard-working family, the importance of focus and dedication was ingrained in Kirkland at an early age. This mentality allowed him to concentrate intensely on school and football. All that was needed from there was a little boost of confidence.

Late in his junior season at Lamar High, Kirkland and his teammates found themselves down at the end of a key playoff game. As the story had been much of the season, a dismal start would be reconciled with a big-play finish.

Kirkland’s coach pulled him aside, telling him that he would win the game for his team. After having a play practically drawn for them in the dirt, Kirkland and the rest of the offense trotted back on the field with only a few seconds left on the clock.

While running a post-corner route, his quarterback hit him in stride, as he scored the winning touchdown. It was one of a few key moments that he needed only to trust in his own abilities in order to be successful.

“I was so focused on playing football, because I knew that was going to be my way out,” he admitted. “I understood that my parents probably didn’t have the money to pay for me to go to college, and they probably would have done it anyway, but I took it upon myself to earn a scholarship.”

With an outstanding senior season in the books, the scholarship offers started to trickle in and Kirkland soon found himself taken in by Clemson. Having watched the Tigers through their championship years while growing up, becoming a part of the tradition at Clemson was a no-brainer for him. A true student of the game, he had the names and statistics of his teammates memorized before he even met them.

After a year of catching up in the weight room and studying the playbook, Kirkland’s hustle earned him a starting spot as a red-shirt freshman during the 1988 season. Realizing that he could play on the same level as players from bigger cities and states, Kirkland quickly rose to the top of his game.

Playing against Duke in a televised game that year, Kirkland’s constant pressure on the Blue Devil quarterback resulted in a sack and caused fumble that allowed the Tigers to take over around Duke’s two yard-line. It was at that moment that Kirkland realized he could play the game at a high level.

“That game really boosted my confidence and helped me understand that when I let it loose, I could really play,” said Kirkland. “I was a young guy, and I was starting for Clemson from almost being not recruited and being red-shirted to making big plays on television in that game in front of 80,000 people. I was saying, `man, this is kind of cool…I could get used to this’.”

His fast and furious play caught the attention of Tiger fans packing Death Valley, including one of his older brothers who quickly called the rest of the family to let them know that their “kid brother really could play.”

“What I had to realize is that if God gives you a gift, if He gives you the gift of being an athlete or a good football player, medically or mechanically inclined, then that’s your gift, no matter where you are from,” said Kirkland. “So I had to really learn that. And once I got that, I understood that I could play on the same level as those guys.”

Kirkland’s dominance as a freshman continued in College Park, MD, where he played perhaps the finest game of his career against today’s opponent (Maryland). The Tigers needed a victory to clinch the ACC crown, and it was Kirkland who was Clemson’s top player that day.

He recorded a career-high 13 tackles, including three tackles for loss and a sack, intercepted a pass and returned it 22 yards, and caused a fumble. The performance garnered freshman All-America honors for the young man who was not even first-team all-state two years prior.

Kirkland’s success in Tigertown took off from that point on, with his play being a big part of four top-25 ranked teams from 1988-91. Setting a school record with 43 starts as an outside linebacker, he also started four straight bowl games, including the 1988 and 1991 seasons when the Tigers were ACC Champions.

In the 1989 Gator Bowl, Kirkland received national attention after a dominating performance against West Virginia and its All-America quarterback Major Harris, earning MVP honors with nine tackles, a sack, and three quarterback pressures.

Kirkland would go on to finish with 40 tackles for loss, 19 sacks, and seven recovered fumbles in his career at Clemson. He was later named to Clemson’s Centennial team in 1996 and was inducted into the Clemson Hall of Fame in 2001.

Kirkland was named First-Team All-ACC three consecutive years, one of just three Tigers in history to accomplish that feat. He was also a finalist for the Butkus Award as a junior in 1990 when Clemson led the nation in total defense.

After being selected in the second round of the 1992 NFL draft by the Pittsburgh Steelers, Kirkland once again found himself in a situation where he would have to prove himself. In a place where football was a business and more time was spent studying the game than ever before, he had to quickly adapt to the fast pace of professional football.

“I switched from outside linebacker to inside linebacker, and basically my first year was like a red-shirt year,” stated Kirkland. “By the second year, I was saying, `sitting on the bench is garbage, and I want to play’.”

In that second season, Kirkland unseated All-Pro linebacker David Little for a starting job, and he was soon on his way to being recognized as one of the league’s top inside linebackers.

In 1996, he registered 114 tackles, four sacks, and four interceptions, earning his first Pro Bowl selection after an impressive performance in the Super Bowl loss to the Dallas Cowboys. During that time, Kirkland was also known for his leadership on defense, especially after picking up the role of pass coverage in the nickel defense when outside linebacker Greg Lloyd went down with an injury. He made a return trip to the Pro Bowl in 1997 after totaling career highs in tackles (126) and sacks (5).

“Once I started trusting what I was seeing, it came together,” said Kirkland of his success in the NFL. “From that point on, I really trusted myself.”

Despite his solid play over the next few seasons, the Steelers struggled on offense and did not reach the playoffs from 1998-00. After being waived before the 2001 season in a salary-cap move, Kirkland went on to be a leader on defense for the Seattle Seahawks and then with the Philadelphia Eagles, each for a year, before retiring in 2003. With 11 years in the NFL, Kirkland notched over 1,000 tackles along with 19.5 sacks, 18 caused fumbles, and 11 interceptions.

Kirkland returned to Clemson in 2004 to finish his degree in sociology and soon began contemplating his next career move. After mentioning to President Jim Barker that he would like to find a way to give back to Clemson in some way, Kirkland received a call about an opportunity to work in the admissions office.

In a move that has brought him full-circle, Kirkland now spends his time as the coordinator of minority recruitment, primarily demonstrating to African-American students the opportunities that exist at Clemson.

“To get a job at a university that had embraced you…that was incredible,” smiled Kirkland. Being a face that many students can identify, Kirkland has relished his role and maintains an open-door policy for the students that he helped to recruit.

“I believe that we’re all here for a purpose that’s greater than us,” he added. “It’s fine to be successful, but are you being significant? Are you helping other people? I just really believe that my call in this life is to be a mentor and guide for student-athletes, and I want to give back what I didn’t have.

“We had coaches and everything, but we didn’t have guys who had been in our situation. It’s not the same effect when you have someone who has actually been to the level that you want to get to and then explains life’s lessons. I want to help people become complete.”

This year, Kirkland received a tremendous honor representing his entire football career from high school to the NFL…induction into the state of South Carolina Athletic Hall of Fame. The accomplishment is just one of the ways in which Kirkland hopes that he can leave a legacy behind. To see the names that he was now being associated with was an awestruck moment for someone who had used pure hard work to reach his goals.

“If you had told me back when I was a kid that before I turned 40, I would make the South Carolina Athletic Hall of Fame, I probably would have laughed,” said Kirkland. “It was a very proud moment for me, and it really made me reflect on everything. It was a tremendous honor to receive…it was wonderful.”

Through it all, Kirkland hopes that his life can be a service and an example to others. He is the epitome of success in our society, with his unheralded rise from small-town glory to the ranks of college and professional football’s finest.

However, we should be careful as to not overlook the contributions he has made and continues to make in his work for Clemson University, as the youth of today learn from him, build confidence, and find their own patterns of success.

Bucky Berlin is a 2007 Clemson graduate and formerly worked as a sportswriter for Clemson’s student newspaper, The Tiger. He now works as a criminalist and forensic DNA analyst for the South Carolina Law Enforcement Division in Columbia, SC.