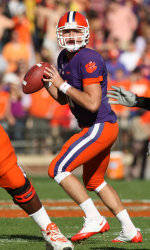 Think about the major decisions 21-year-old Kyle Parker has made over the last three years.

First, in the fall of 2007, he had to decide whether or not to enroll at Clemson a semester early and give up his second semester of his senior year at Bartram Trail High School in Jacksonville, FL along with all the fun that goes with that experience. Could he play football and baseball in what should be his senior year of high school?

Then in July of 2010, he had to decide if he should give up college football and sign a baseball-only contract with the Colorado Rockies, or return to Clemson and play football for the Tigers. He had helped Clemson to the ACC Atlantic Division title the previous fall and finished in a tie for first in the nation in victories by a freshman quarterback. It was a decision that he knew would cost him quite a bit of money if he returned to Clemson.

A month later, he had to decide on signing a contract with the Rockies that would allow him to play football at Clemson, but end his college baseball career. Fortunately, Parker did not have to deal with these issues alone. He had the backing of his parents, Carl and Cathy, who have been a guiding light to #11 since the day he was born.

“I have been blessed with two great parents,” said Kyle. “My dad has been the most important person in my life when it comes to sports and my career path, and my mother has always been there for me when it comes to everything outside of sports.”

When it came to the aforementioned decisions over the last three years, his father could relate his own experiences to his son.

Carl was a two-sport athlete at Vanderbilt from 1984-87. He played football and baseball during his first two years, then concentrated on football his final two seasons. He was drafted in the 12th round of the 1988 NFL draft by the Cincinnati Bengals and played two years with the franchise.

Kyle was born on September 30, 1989, just 12 days after Carl made his first NFL catch (45-yard reception) in a game against the Pittsburgh Steelers.

Carl continued his professional football career in the 1990s. He played in the World League of American Football for the Sacramento Surge in 1991 and 1992. During his first year, he led the Surge in receiving with 52 catches for 801 yards and eight touchdowns. His quarterbacks on that team were former ACC signal-callers Mike Elkins (Wake Forest) and Ben Bennett (Duke) along with former South Carolina quarterback and current Voice of the Gamecocks Todd Ellis.

In 1992, Carl was second on the team in receptions (42) and helped the Surge to an 8-2 record along with a division title.

“My dad’s experience as a two-sport athlete in college was a big plus in helping me with these decisions the last couple of years,” explained Parker. “He had been through it himself. He handled all the negotiations (with the Rockies), and that took a big load off my shoulders.”

When it comes to how to live one’s life away from the gridiron and diamond, Parker has received sound advice from both his mother and father. One need only review the story about his mother that made national headlines over two years ago to see that he has a great role model when it comes to perseverance and strength of character.

In 2007, his mother was watching an ESPN feature on a community in Barrow, AK. The community had a high teenage suicide rate. The local high school had just started a football program, and the support of the team had a positive impact on the community.

However, the Barrow High School Whalers did not have much in the way of facilities and had to play its games and practice on an all-dirt field that was littered with rocks.

From nearly 4,000 miles away in Jacksonville, FL, Cathy decided she would mount a fundraising campaign over the internet to raise money to provide Barrow High School with an artificial playing surface (growing grass is out of the question that far north).

Making contacts through the internet, she raised over $800,000 for the school and made arrangements to have the blue and gold turf field delivered and installed in time for the season-opener of the 2008 season. The school was so grateful that the field is named Cathy Parker Field.

“We all laughed when she said she was going to take on this project,” recalled Parker. “But we could see she was serious and she did a great job raising that money. When she got it done, we were all very proud. When they named that field after her, that was neat.”

That all-around support on and off the field is a big reason Parker has been perhaps the best all-around athlete at the FBS level over the last two years. During the 2009-10 academic year, he became the first athlete in Division I history to pass for 20 touchdowns in football and hit 20 home runs in baseball.

Parker did it against the highest level of competition. Clemson won the ACC Atlantic Division title for the first time on the gridiron while upsetting #8 Miami (FL) on the road in the process, won a bowl game, and finished in the top 25 of the AP poll.

In the spring, Parker helped the Tiger baseball team to the ACC Atlantic Division title, the Auburn Regional Championship, the Clemson Super Regional title, and a third-place finish at the College World Series. Parker was drafted in the first round (#26 overall) by the Colorado Rockies while he was playing an NCAA Regional game at Auburn. He hit a home run in that game in helping the Tigers to victory.

Jack Leggett’s baseball team was #4 in the final polls, meaning Parker had been a leader on two top-25 squads in two major sports in the same academic year, something no Clemson athlete had done since Dexter McCleon in 1993-94.

Parker has continued to show his leadership qualities on the gridiron this year. That was especially evident in another athletic event at Auburn, the Tigers’ overtime contest on September 18. In the second half, he took a blow in his back area when tackled by two players at the end of a running play when he was scrambling for additional yardage.

But when Auburn scored later in the quarter, he jumped to his feet and was ready to go, much to the surprise of the media covering the game, but not his teammates.

“He is tough, tough,” said tight end Dwayne Allen. “Here is a guy sitting with a million bucks in the bank and he gets hurt. If I was in that situation, I don’t know how I would have reacted.

“He knows he has a career in baseball after football. But, Kyle got up and went back out there. He sucked it up and got back into the game and took us to overtime. He wanted to win.”

The Auburn football game might have been the most tangible example of Parker’s toughness, physically and mentally, and his overall strength.

We should not be surprised to see that indomitable spirit. He comes by it naturally.