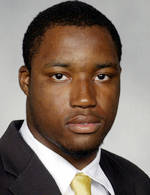 Next play. These are the two words used by senior linebacker Kavell Conner to describe the focus of the 2009 season. This kind of mental toughness is something that has allowed Conner to become one of the leading tacklers on the Tiger defense and one of the top linebackers in the ACC.

Entering the 2009 campaign, Conner was second among active ACC players in career tackles (202). So far this season, he has played 416 snaps and amassed 63 tackles. Those are outstanding numbers from a player who was a highly-touted running back and safety coming out of Manchester High School in Richmond, VA.

“I never played linebacker until I got to Clemson,” he admitted. “It was something my coaches wanted me to try and it worked out for the best.”

Head Coach Kavell Conner had another outstanding and consistent game’.”

Conner has been a consistent player from the earliest stages of his football career. “I started playing football when I was five for no other reason than because I thought I would like the sport. Turns out I was pretty good at it.”

In high school, Conner realized how good he could really be. As a senior at Manchester High, he averaged 8.2 yards per carry, rushed for 1,301 yards, and scored 25 touchdowns on the offensive side of the ball, and he had 25 tackles for loss on the defensive side.

That was when college coaches started to take notice, and former Tiger Defensive Coordinator John Lovett (now at Miami (FL)) was one of them. After receiving offers from other schools such as Oklahoma and Pittsburgh, Conner decided that Clemson was the place for him.

“I came to Clemson because of the great football tradition and football atmosphere,” recalled Conner. “I felt at home when I visited and loved the beautiful campus.”

After red-shirting in 2005, Conner became an important part of the Tiger defense. During the 2006 season, he saw time as a second-team linebacker and had at least one tackle in 11 games. He showed just how much of a key role he would play in the defense by becoming third among non-starters in tackles (31).

In 2007, Conner moved his way up to first on the team among non-starters in tackles with 46. He had a breakout game as a reserve linebacker against #21 Auburn in the Chick-fil-A Bowl, recording 15 tackles in 77 snaps. No Tiger has had more tackles in a bowl game since 2002.

In 2008, Conner used that mental toughness and determination to work his way into a starting linebacker spot. With 125 stops, Conner became the team’s leading tackler and was also a crucial reason Clemson was in the top 15 in the nation in total defense, pass defense, and scoring defense.

Conner started out the 2008 campaign with a bang, tallying 18 tackles against #24 Alabama, which tied the school record for tackles in a season-opener. He was resilient against ACC offenses all season and led the team in tackles a team-high six times. He finished the season with 11 tackles against Nebraska in the Gator Bowl, the second straight year he was tied or led the Tigers in tackles in a bowl game.

Conner shifted his focus away from football for a short time during the summer of 2009 while he was concentrating on finishing up his undergraduate education. He needs to pass just one course this semester to receive his degree in sociology on December 17. While his Clemson degree will prepare him for the next 40 years of his life, he wants to continue to play football as long as he can.

“I plan on furthering my football career if the opportunity presents itself,” stated Conner. “If not, I want to work with kids as a teacher or guidance counselor.”

Conner went back to focusing mainly on football and how to make himself better. He has been putting up solid numbers this year, a big reason Clemson is second in the ACC in total defense and among the top 20 in the country in scoring defense, total defense, and pass defense.

So far this year, Conner has 63 tackles, including four tackles for loss and one sack. He has also been the team’s leading tackler three times, against ACC foes Boston College, Maryland, and Wake Forest.

When watching the 6’1″, 235-pounder on the field, some would say he looks like he plays inspired football. Conner revealed that much of that inspiration and desire to succeed comes from his grandfather.

“He has been my father and has raised me to be a great man by being the perfect example and role model. He is a hard working man who is accountable, responsible, and dependable. Those are the qualities I try to live by daily.”

These qualities have allowed Conner to become a leader to his teammates, both on and off the field. “Kavell has shown toughness, and that has carried over to the rest of the defense,” said Swinney. “He is a leader on the field.

“He is one of the big reasons we are second in the ACC in total defense and are among the top 20 in the nation. It seems like every game he makes a key stop, or in the case of the Florida State game, ran with the ball after he recovered an errant lateral.”

With Clemson trailing 24-21 versus Florida State on November 7, DeAndre McDaniel. However, the pitch rolled past McDaniel and into the hands of #33, who raced 29 yards to the Seminole 24 with 12:08 left in the game. Less than three minutes later, the Tigers scored a touchdown to take the lead for good.

“That was a great moment for me,” smiled Conner. “It was a great feeling to have the ball back in my hands. It gave me flashbacks of the old days.”

As the Tigers prepare for their last stretch of regular-season games, Conner knows the importance of finishing strong. “It would mean everything to me to get it done and win an ACC Championship as a senior. We have come so close every year and I think it would mean a lot to our entire team to reap the benefits of our hard work.”

When asked what the defining moment of his Clemson career was, Conner replied, “I think the best moment has yet to come. If we keep working hard and stay focused on that next play, we will experience great moments at the end of the season.”

Focus and determination. Next play.