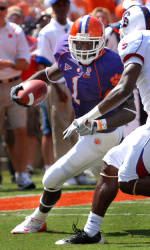 James Davis is one of the most well-known running backs in Clemson history. He is certainly one of the most popular. If you attended any of the last four Fan Appreciation Days in August, you could see that. The 5’11” native of Atlanta, GA has brought speed, toughness, and competitiveness to the backfield. More importantly, he has provided leadership off the field. It is safe to say that Davis has made a huge impact on the Tiger program.

A highly-recruited running back, Davis chose Clemson over Alabama, Florida, Georgia, and Virginia Tech to name a few. Davis was immediately integrated into the offense as a freshman in 2005. In his first game against #17 Texas A&M, he rushed for 101 yards and scored a touchdown in the Tigers’ 25-24 win over the Aggies.

He would go on to be Clemson’s leading rusher and finish fourth in the ACC with 879 yards. Furthermore, his nine touchdowns established a single-season record by a Tiger freshman. The “icing on the cake” came when Davis was named ACC Rookie-of-the-Year and MVP in the win over Colorado in the Champs Sports Bowl when he gained 150 rushing yards.

Davis continued to improve as the years went on. As a sophomore, he rushed for 1,187 yards and 17 touchdowns. That rushing touchdown total established a school record and helped him earn First-Team All-ACC honors. His season included a career-high 216 rushing yards against #13 Georgia Tech on national television. He joined C.J. Spiller on the stage of ESPN’s College Gameday postgame show.

Then as a junior, Davis added 12 touchdowns and rushed for 1,064 yards. He was again named First-Team All-ACC.

His senior year has not been as productive, but he does have a pair of 100-yard rushing games and has had his best year in terms of receiving. He enters his final regular-season game needing 203 yards to become Clemson’s all-time leading rusher and needs just four touchdowns to become the school’s all-time leader in that category.

With his success in mind, I began the task of brainstorming to see what I would write about for his senior feature story. He is one of Clemson’s most popular players ever. Just go to a game and see how many people are wearing his #1 jersey. Television announcers repeatedly note his athletic talent, and he might have the thickest file in Clemson’s SID office, because he has been the subject of countless feature stories.

I decided to follow Davis around for a day to see what his life was like. I wanted to find out who James Davis was behind the helmet and football jersey.

I met Davis at 9:00 AM for his English 304 business writing class. The class was intimate, with just 18 students. Being that it was a Monday morning, I expected the class to be somewhat sluggish. However, I was surprised. Davis’ professor (Ashley Cowden) was energetic, and that rubbed off on the students. He took notes as she discussed job applications, building resumés, and preparing for job interviews. This information was especially useful, as Davis will graduate in December and enter a new chapter in his life.

As class ended, I asked Davis what was next. He responded with one word, “interviews.” He has just one class on Mondays, but he has a full load on Tuesdays, the day most Tiger players do interviews in conjunction with Dabo Swinney’s press conference. So, Davis does the bulk of his interviews on Monday morning.

We entered the McFadden team room at 10:24 AM, and writers immediately looked in his direction. Davis seated himself behind a table and six writers surrounded him. One reporter asked about his thoughts on the season.

Davis took a moment before answering. “It’s been discouraging, but we have to be tough and do everything we can to win. There are a lot of talented guys on this team and the season isn’t over.”

I watched as he answered every question ranging from bowl aspirations to offensive plays. No question was off-limits. Davis handled the interviews with grace. He was calm and collected as he shared his thoughts with writers who would use his words in their stories.

The opponent later that week was Boston College. Davis’ response to the game was, “I feel like Boston College is a rival because we haven’t been able to beat those guys since I’ve been here. I just want a win.”

Davis got his win that weekend, as Clemson defeated the Eagles 27-21.

Just ask any writer who covers Clemson and they will tell you that they are going to miss their weekly Monday meetings with Davis. He is held in high regard by each media member because he always shows up to meet with them, regardless of the outcome or how he played, and faces the questions head-on like a team leader should. He has served in this role for four years.

Interviews ended at 10:40 AM because Davis had to lift weights. While we were near the locker room, he learned that the day’s schedule had changed so that meetings and practice were later. He smiled because he knew he would be able to take a nap. Ever the teammate, Davis informed wide receiver Tyler Grisham of the change in schedule as they retrieved their workout clothes from their equipment room lockers.

It took Davis longer to get ready than expected. So, as we walked down the stairs to the weightroom, I asked him what the holdup was about.

“I was talking to Cullen (Harper) and Aaron (Kelly) about the game this week,” he said.

I was impressed to see how focused he was on his upcoming opponent.

By 11:00 AM, we were in the weightroom. There were nine of his teammates in there as we entered. Each one was at a station doing some type of weight work. Davis was visibly happy to see Strength Trainers Larry Greenlee and Dennis Love.

“Did you see any of the (NFL) games last night?” Davis asked.

From there, the three discussed outcomes and particular plays.

Then, Davis began warming up with kettle-bell work (hip flexibility with hurdles) and stretching. He did three sets of squats, adding more weight each time, then moved to the power-clean drill. The bench press was next, as he and Kelly spotted for one another. The two did six sets and added weight each time. During this period, wide receiver Xavier Dye came over.

Dye informed me that Davis was his “big brother,” to which Davis responded with a laugh. Davis teased Dye, a graduate of James F. Byrnes High School, about his alma mater’s loss the previous Friday night. Suffice it to say, Dye ended the conversation there!

Perhaps the most memorable moment came when Davis decided to do more weightlifting, which was optional. Graduate Assistant Strength Trainer Marcus Bradley came to me and said, “That takes dedication.”

Next, we headed out to eat lunch. In the car, Davis received a phone call from his brother Michael. The two talked about football and Davis inquired about his other brothers and sisters.

“Michael is the running back for his team,” exclaimed Davis. “He’s only a freshman, but he has talent. I talk to him every day and give him advice. I tell him to stay focused, because he has a chance to be a big-time college running back.”

It was apparent that Davis was close to his family. He told me that he talks to his mother every day. Much of his dedication and hard work on the gridiron is fueled by the support of his family.

I left Davis at noon so he could go home and rest before practice. There was not much to observe in that!

We met again at 3:15 PM in McFadden for the first of three meetings. Coach Swinney was extremely accommodating and allowed me to sit in all of Davis’ meetings. The first began at 3:30 PM.

It was the senior meeting, a gathering Coach Swinney holds twice a week. We walked in early and sat down. It was loud and noisy, as the seniors were trying to decide what underclassmen they wanted to invite to their next meeting. When Coach Swinney walked in, it got quiet in a hurry.

Coach Swinney was straightforward with the seniors, as he detailed what it would take to beat Boston College. “Winning starts with how you meet, how you practice, how you get up, and how you go to the stadium. When we walk on the field, we’ve got to expect to win.”

The meeting accomplished its goal of instilling the week’s goals for the seniors. Davis sat attentively and absorbed everything that was said.

The team meeting was next. The front row in the McFadden team room was reserved for the seniors. Davis sat in the front and I moved to the back of the room by the assistant coaches. Coach Swinney addressed the team in the same manner as he did with the seniors…straightforward and honest about what it would take to win at Boston College. He also reminded them of the series history.

Following the team meeting, Davis went to the training room to have his ankles taped for practice. Then another meeting, the running backs position meeting, began.

Running Backs Coach André Powell walked in and said, “We have a lot of things to go over.”

He was true to his word, as the running backs learned what plays and schemes were going to be used against the Eagles. Davis was the most talkative player in the room. He asked questions and Coach Powell gave him answers. I was impressed with his desire to know every nuance of every play. He wanted to make sure he did not make any mistakes in the upcoming game.

Practice began promptly at 5:15 PM. It was a cold, blistering evening as I watched Davis work on pass protection and do scramble drills among others. He started off in the far section of the field going through plays with the other running backs and quarterbacks as the rest of the team went through normal stretching exercises. Afterwards, Coach Swinney brought the team together. He urged them to have energy and practice with passion.

Practice was organized into 22 five-minute periods. During each period, Davis would perform a different drill. Midway through practice, he caught passes from the quarterbacks. He then worked on blitz protections and other blocking techniques. Following that, the entire team came together and worked on running plays. After a few more periods, practice came to an end. The team huddled once again and reflected on the practice.

As the team broke away from the huddle, I went to find Davis. He was running and I had to catch up with him.

I waited for Davis to come out of the locker room. It was 8:45 PM. The day was coming to a close and it had been eventful, to say the least. It was apparent that he lived and breathed football, but he still had some studying to do when he arrived back home.

He was courteous and attentive while being interviewed by the media. He took on extra workout drills in the weightroom. He asked questions in meetings so that there would be no hazy spots.

It was all in a day’s work for the senior, one of hundreds of practices that he has endured in his time at Clemson. Like every other practice, he was passionate, driven, and determined. With qualities like those, the sky is the limit for this team leader.