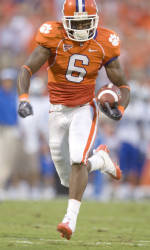 This weekend’s game against Florida State will be one of great importance. Formerly known as the Bowden Bowl, it will be an ACC Atlantic Division test for Clemson to remain atop the standings. But for senior wide receiver and Florida native Jacoby Ford, this game holds so much more than that. With a historic victory two weeks ago over the #8 Hurricanes in front of his home crowd in Miami, a win over Florida State would make his senior season even more special.

Why? A win today would mean Ford would be on the first Clemson team to beat both the Hurricanes and Seminoles in the same season. It would also mean that he would have three victories over Florida State in his career, a special treat for a player who has ties to the Seminole program.

“My brother and my dad inspired me to play football,” said Ford, whose brother Davy is a Florida State alumnus and former running back for the Seminoles from 1997-01. “My dad put the football in my hands and my brother was always there for me at any time that I played football. Having my brother around and being able to watch him play was an inspiration.”

Ford began playing football at the age of four, even before he was allowed to play little league football at the local recreational park. He played with Davy, who is nine years older and has been a role model all his life.

“When I was four, my brother would bring me in the room and we would play right there on the floor, but he would play on his knees and I would play standing,” recalled the younger Ford. “I had to get through the doorway to score a touchdown. It didn’t work all the time because he was always bigger than me, but I tried my hardest. That’s when I first started playing.”

Ford first played organized football at local Lake Lytal when he was six, the same place Davy had played, as well as current NFL All-Pro Devin Hester. When he reached Cardinal Newman High School near his hometown of Royal Palm Beach, he was already known due to the legacy left behind by his older brother. However, Jacoby played wide receiver, different from the running back position that Davy played.

As Tiger fans are well aware, he was also a dangerous weapon on special teams. Ford had 22 receptions for 550 yards and 10 touchdowns as a senior at Cardinal Newman High and was named MVP of the 2005 Palm Beach County All-Star game. He then spent a semester at Fork Union Military Academy in Virginia, where his coach (Jeff Shuman) called him the fastest player he ever coached on the gridiron.

The football similarities between Davy and Jacoby end at high school. Jacoby is admittedly a Seminole fan whenever Florida State is not playing Clemson and has experience in both the War Chant and the Tomahawk Chop. But making a name for himself at Clemson has been important to him and his family, and his brother couldn’t be happier.

“Clemson was a better opportunity for Jacoby to do things in his own time and his own way,” said Davy. “My time was then and his time is now. As far as him choosing Clemson, that was the perfect fit for him.”

Ford began his freshman season with a bang. His first touchdown as a Tiger was a 92-yard punt return in his first game, the season-opener against Florida Atlantic in 2006. It is still the longest punt return in Clemson history and was the longest in the ACC that year.

Playing as a true freshman, he had an impact right away on both special teams and as wide receiver. On special teams, he averaged 32.8 yards per kickoff return, enough to lead the ACC that year had he had enough returns. He also had a 94-yard kickoff return for a touchdown against Louisiana Tech, making him one of three Tigers in history to return both a punt and kickoff for a score in a career. He is the only Tiger with a 90-yarder in both categories.

The 2007 season saw Ford improve upon his freshman campaign. He was third on the team in receptions and on pace to set a school record in yards per carry until he suffered a broken ankle at Maryland as he was being tackled out-of-bounds.

“I had a lot of fun in that game up until that last play. When I broke my ankle, I couldn’t believe that was happening. I looked at my foot, slammed it down on the ground, and popped it back into place. The trainers came and asked me what was wrong and I told them I broke my ankle. I don’t think they believed me right away, but it was swollen and they could see that. After I got the X-ray, it revealed that I did break it.”

It is no secret that one of Ford’s most dangerous skills is his speed, as he has been clocked unofficially at 4.16 in the 40. Naturally, he was concerned about losing his speed after coming off such a serious injury.

“I was worried about how I would come back and if I would be the same, because it is a big asset. I had to finally realize that I wasn’t going to be able to play for the rest of the season, so I had to move on and start preparing for the next season.”

As the 2009 NCAA indoor track national champion in the 60m with a time of 6.52 (his fastest is 6.51 and also a school record), retaining his speed apparently was not a problem.

“Rehab was very frustrating at first,” admitted Ford. “I didn’t want to do anything and I let myself go for a little while. I had to refocus and get back on the right track. The rehab process was difficult, but the trainers helped me get through it. I knew it was going to be hard and painful, but I’m back to my old self.”

His hard work produced immediate results. In 2008, Ford improved to second on the team with 55 receptions for 710 yards and four touchdowns. He had at least one catch in every game and had his first 100-yard receiving game against N.C. State with six catches for 106 yards and a score. He added two carries for 48 yards, giving him 154 yards from scrimmage.

Perhaps one of the most exciting moments of 2008 was his 50-yard touchdown catch on a trick play in the home win over South Carolina. “That was my favorite play of the year. I came off the field and stood two yards from the sideline while my coach acted like he was chewing me out. As soon as the ball was snapped, I ran towards the endzone because no one was covering me. I was excited that the play worked.”

He ended the season strong with a career-high 112 receiving yards and a 46-yard touchdown in the 2009 Gator Bowl against Nebraska.

This season has certainly had its ups and downs for the Tigers. After starting 2-3, they have gotten back on track with ACC wins over Wake Forest and #8 Miami, and another victory over Coastal Carolina.

Ford started the season well with three catches for 70 yards and a touchdown while also adding a 61-yard punt return for a score against Middle Tennessee.

He continued to play well in the Thursday night ESPN game at #13 Georgia Tech, as he had his longest career touchdown reception on a 77-yard catch. Then at Maryland, he had his first career rushing score.

Against the Chanticleers last weekend, he threw a touchdown pass, making him one of just two Tigers in history to account for a touchdown five different ways. The other to do it is classmate C.J. Spiller. Together, they have a chance today to become the greatest all-purpose running duo in NCAA history. They need to combine for 293 all-purpose yards in order to surpass the record of 10,253 yards, a mark set by Marshall Faulk and Darnay Scott of San Diego State (1991-93).

The 5’10” wideout has also left his mark in the Tiger recordbook with eight career touchdowns of at least 50 yards, second-most in school history.

Ford, who will graduate on December 17 with a degree in sociology, has four regular-season games left in a Tiger uniform. His family will be present throughout, rooting for Jacoby and the Tigers’ quest to capture an ACC title. His mother admits that she still harbors ties with both Clemson and Florida State.

“This has been a tremendous experience for us as parents, to know that we placed our boys on the right track and gave them the things that they needed in life to take them further,” she said. “So I have a split hat, because I have boys who went to each school.”

She did not have split feelings when Clemson beat Miami two weeks ago, especially when her son scored the game-winning touchdown on a 26-yard reception in overtime to give the Tigers one of their most remarkable victories ever. What makes it even more special was the fact that he called the play himself.

“I noticed that the safety was overplaying the corner route and that I could go inside or outside,” he said. “Coach (Dabo) Swinney drew it up on the sideline for Kyle (Parker) and we knew that’s what we were going to do…and it worked. I was glad they gave me the opportunity. It felt good and it shows that the coaches have trust in me to go out there and make the play.”

It felt even better to do it in front of his family, including his father Davy, Sr. along with his mother and brother. After the score, #6 held the ball even tighter and immediately brought it to her in the stands.

For Davy, that game only confirmed that this is Jacoby’s time. “It’s good that he has his own name. Down here in Miami, he used to be known as `Davy’s little brother,’ but now people say `there’s Jacoby’s older brother.’ It’s good to be able to see him do so well.”