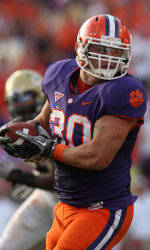 He did not grow up dreaming about college football. He did not bleed orange from birth or aspire to be a Tiger football player. He is not a product of generations of Clemson graduates. When Chad Diehl was a child, he played baseball and only visited Clemson occasionally with a friend.

Today, Diehl is rated by CBSSports.com as the #1 fullback in the nation for the 2012 NFL draft and is one of the leaders of the Tiger football team.

Now he has a child of his own and is proud that he will soon be an alumnus of Clemson. It may not have been love from the start, but Diehl now knows what is so special about “these hills.”

“I did not really grow up a fan of any college team, although I did come to several games with my childhood friend, Josh Buchannon, and his dad, J.E., who were both really involved in my life as a child,” said Diehl. “I was really into baseball at that age and did not even dream about playing college football while at the games, which is kind of weird.

When you look at Clemson’s statistics for the past three years, you will not see his name as a leading rusher. However, you will see the names of James Davis, Jamie Harper. Ask any of these Tigers, “Who led the way?” and they will be quick to tell you it was Diehl, all of his 6’2″, 260-pound frame and his canny ability to block.

With so much promise for his freshman season in 2007, things did not begin so well. Diehl broke his leg on a kickoff return during the Furman game, only the third game of the year. He was granted a medical red-shirt and spent the rest of the season rehabilitating his leg back into shape. Since returning, Diehl has proven to be one of the most valuable players on the Tiger offense with his blocking prowess.

After making four starts as a red-shirt freshman in 2008, he was the lead blocker on countless runs by former Tiger All-American C.J. Spiller, and those blocks contributed to his sixth-place finish in the Heisman Trophy race in 2009. The Tigers won the ACC Atlantic Division title that year, and they defeated Florida State and Miami (FL) in the same season for the first time. Clemson also finished in the top 25 of both polls.

The season ended in Nashville, TN at the Music City Bowl against Kentucky, a big victory for the Tigers. But most importantly, it was a big game for Diehl, as he earned attention from the ESPN announcers for his blocks. The season overall proved to be a successful one, with film grades consistently in the 80s.

The 2010 season was a typical year for Diehl, as he had only two rushes for four yards and seven catches for 13 more yards. But, he had more memorable blocks. He actually had more knockdown blocks (34) than yards, but his blocking is worth more than statistics to the coaching staff and his teammates. At the end of the year, he received the Dedication Award among offensive players for his hard work in the weightroom.

Diehl has played 44 career games, and this year should become Clemson’s career leader in that category. If he plays in his 54th game, he will establish that mark.

The Lyman, SC native attended James F. Byrnes High School, a well-known powerhouse for football. There, he played offensive guard, linebacker, and fullback. As a junior, he registered 141 tackles and 12 tackles for loss. Then as a senior, he totaled 111 tackles, 19 tackles for loss, seven sacks, and four caused fumbles.

Upon graduation, Diehl was rated as the #18 fullback in the nation by College Football News and the #19 fullback by Scout.com. He was also the #27 player in South Carolina according to SuperPrep and the #21 player by Rivals.com. Diehl was the MVP of the North-South High School All-Star game as well.

Upon graduation from Clemson this year, Diehl will receive his managemnet degree. But, that is not what he plans on pursuing, at least not at first.

“I plan on training after the season and continuing my football career, but only if that is God’s will for me and part of the plan that he has in store for my life. I will continue to love my beautiful wife, Candace, and our precious daughter, Peyton, regardless of what I do. I will be there for them for the rest of my life. I also plan on being dependable for both of my parents (Ken, Denise), who are not in the best conditions of health.”

Diehl told TigerNet.com writer David Hood recently in an interview that having the responsibilities of a wife and daughter have changed him, and for the better. “It definitely does”, admitted Diehl. “Having a wife and then a newborn daughter, you really start to think about the future. You have to make sure that even when you are out here, you are at full speed and focus on the little things scouts look for.”

But for now, he is focusing on his last season as a Tiger, because he knows it will come and go quickly. When asked what he would miss the most about Tigertown, his answer was, you guessed it…football.

“The best part of playing football is all of the relationships you develop with your teammates and coaches,” stated Diehl. “Going through what you go through as a football player – the hard work and difficult schedule you have to deal with – the teammates become your brothers who you have to lean on and hold up at times to get through it all.”

Three people in particular have been a strong hold for Diehl’s football career, including Mike Srock and Bobby Bentley, both from James F. Byrnes High School, and Clemson Director of Strength & Conditioning Joey Batson.

“I give a lot of credit to these coaches for making me the player I am today,” added Diehl. “Coach Bentley taught me what winning is all about.”

Despite not growing up as a Clemson fan, Diehl came to Tigertown four years ago and has made quite an impact on the football program. During his time here, he has become a husband and now a father, and he will soon graduate.

He certainly now knows what is so special about “these hills.”