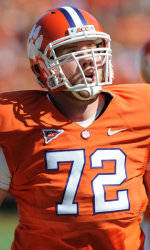 For all Tiger fans, a football Saturday in Clemson is always a special occasion. For graduate offensive line stalwart and Tar Heel state native Landon Walker, Saturday’s game versus North Carolina may be a little more special as he makes his 33rd consecutive start at right tackle for this nationally-ranked Tiger squad.

Walker, a native of North Wilkesboro, NC, has made quite a mark in his four-plus years in Tigertown. But his ties to the Clemson Family go back even further, making this contest against the Tar Heels have that much more meaning.

This weekend, Clemson will celebrate with a 30th-anniversary reunion of the 1981 team that claimed the ACC Championship, Orange Bowl title, and National Championship. Walker’s father, Gary, was a member of that 1981 squad that will be honored on Saturday.

Coming from a family where his father had the opportunity to be a part of a national champion, it should not be a surprise that he is playing college football. But, it may surprise some where he watched many games at an early age.

“It was always a dream of mine to play college football,” said the younger Walker. “When I was growing up, I always knew what I wanted to do. But to be here at Clemson right now is more than I could ever ask for.”

Walker is quick to credit his father for his decision to start playing the game in third grade.

“He was always talking about football and what it meant to him,” remembered Walker. “He never made me play the sport, but it was in my blood from an early age. The fact that he played here at Clemson makes it that even more special.”

Growing up in North Wilkesboro, Walker played youth football games on Saturday mornings, which would preclude the 190-mile trip to Clemson. Instead, he and his family saw many games in Chapel Hill, which was nearly 65 miles closer to home.

“When I young, I would play youth league games on Saturday. By the time that was over, we would watch a college game. I saw a lot games at North Carolina. Seeing those games made me want to play even more.”

It was during his freshman year of high school that Walker made a trip that helped shape his future.

“During my freshman year of high school, I came to a Clemson game,” recalled Walker. “Charlie Whitehurst was the quarterback, and seeing everything about gameday in Clemson was something that you can’t forget. One thing that I still remember is how great the Clemson fans are. It is special to be a part of that.”

After Walker decided to attend Clemson (over N.C. State, Tennessee, and Virginia Tech), he became a mid-year enrollee. His then-position coach, Brad Scott, still remembers the effort of his young offensive lineman, even as a youngster going through spring practice while most kids his age were still worried about who to ask to the senior prom.

“Landon came in and was a hard worker from the start,” said Scott, now an assistant athletic director for the Tiger program.

Scott can still remember Walker’s first spring practice and how things played out for the Spring Game.

“He had a lot thrown at him right away,” added Scott. “The day before the Spring Game his first year, he was expecting to get some work in, but we had an older player (Christian Capote) not able to play in the game.

“I called Landon and told him he was going to get more than he had expected. You had a young man out there going against players like Gaines Adams. He never backed down. Coach (Dabo) Swinney talks about being `All In.’ There is no question that Landon Walker has always been `All In’ during his time at Clemson.”

During his four-and-a-half years in the program, Walker has had the opportunity to play first for Scott and now for Robbie Caldwell, who joined the program in January. The experiences of playing for both coaches who are so well respected have made Walker better for it.

“Coach Scott has made me the player I am today,” explained Walker. “He taught all of us linemen how to play the game. We are technique specialists because of him. I am also very fortunate to play my final season at Clemson with Coach Caldwell as my position coach. He knows so much about this position, and that can only make me a better player.”

While Walker has had the opportunity to play for great coaches, he is quick to mention his fellow offensive linemen that are also seasoned veterans and have been through the ups and downs of the past four years.

“We have a unique group,” said Walker. “Phillip Price, who was originally a tight end, Mason Cloy, David Smith, and I came in together. We were thrown into the fire early, but that made us the close group that we are. These guys are like brothers to me. To be able to have a final season that has started out so well makes it even more memorable.”

Walker has been able to enjoy the 2011 season a little more due to his hard work in the classroom during the previous four years. In August, he earned his degree in management and is currently taking graduate classes. The opportunity to have his degree before the 2011 season has been an advantage for him and his team.

“To already have my degree is a blessing,” said Walker. “Knowing I have my degree from Clemson means so much to me and my family. It also makes this season so much easier to deal with from an academic standpoint. I have more time for football than ever before.”

While he has prepared for life outside football, he has put in preparation for the next level if he decides to make the NFL a career. In his four years and 42 games as a starter, he has had to battle against the likes of Ndamukong Suh (Nebraska), now an All-Pro in the NFL, Jerry Hughes (TCU), now with the Colts, and Derrick Morgan (Georgia Tech), now with the Titans. And that list does not include his daily battles in practice for three years against Da’Quan Bowers, now with the Buccaneers.

While Walker may have a little more time than the regular student-athlete, his calendar is still jam-packed with graduate classes, practice, and other obligations. One place where you can usually find the well-spoken offensive lineman is meeting with the media that cover the Tigers. He has always had the reputation of being an outstanding representative of the program, both in good and bad times.

“It isn’t always easy being positive, especially when things are not going as well as you want them to,” admitted Walker. “But, I enjoy speaking to the media. They have a job to do. I think doing interviews helps me prepare for the game that is coming up.”

The calendar has already turned to October, and before long Walker will be playing his last game as a Tiger. However, he is still looking forward to everything that this Clemson team has to play for.

“It is really hard to believe how fast the past four years have flown by,” said Walker. “I really think this year could be very special for us. This team has done a great job of taking this season one game at a time.

“There are still so many goals out there that we have not reached and will have an opportunity to do so if we keep playing together.”