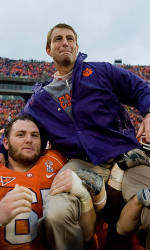 Forty years ago this October, the New York Mets made an incredible run to the World Series Championship. It might be regarded as the most improbable team title in professional sports history, because the Mets had finished last or next-to-last in each of their first seven years in the Major Leagues.

During that year, Karl Ehrhardt, a loyal Mets fan, would hold up 20″ x 26″ signs with large block letters from his seat just behind the Mets dugout. He made over 1,200 different slogans during the course of his 18 years as a season ticketholder.

One of the signs he held up frequently during that 1969 late run simply said, “Ya Gotta Believe!” In the World Series that year, he modified it some and displayed the sign, “Believe in Miracles?”

When the Mets finished off the Baltimore Orioles in five games that year, every Mets fan did believe. It became the official slogan for the Mets in 1973 when they made an improbable run behind Tug McGraw to reach the World Series. The club eventually had the slogan copyrighted.

On November 20, 1969, less than a month after the Mets’ World Series Championship, Dabo Swinney was born in Birmingham, AL. No one in the Swinney family has ever been a Mets fan and we doubt his mother watched that 1969 World Series during her pregnancy.

But Swinney is using a similar theme as he brings Clemson Nation together for his first full season as the leader of the Tiger football program. At least that is the feeling you get after listening to him at the ACC media gathering in Greensboro, NC this past July.

“The most important job for me right now is to get our players, our coaches, our secretaries, our fans, and everyone associated with our program to believe we can win,” said Swinney. “I have been preaching the power of believing since I took this job.”

Swinney invoked the term “All In” from day #1 of his tenure on October 13, 2008 and had his team throw “All In” chips into a bucket before each game, something that will continue in 2009. “All In” is really another way of saying “Ya Gotta Believe!”

This past spring, Swinney and his staff visited Mack Brown’s Texas staff. Brown, a former North Carolina coach who has brought Texas to among the national powers on a consistent basis, gave Swinney some words of wisdom, including the importance of believing you can reach a goal.

“Coach Brown was terrific and very generous with his time, and I am very appreciative,” he said. “I took pages and pages of notes during the time we spent in Austin. One of the reasons we went there was because Texas had struggled to get over the hump before Mack Brown arrived. I wanted to know what he did to get them over the hump, which is what we want to do.”

While Brown gave Swinney some tips about the “Xs and Os” of his offense and defense, he stressed the importance of believing you can accomplish your goals first. “Coach Brown said the most important thing he had to do was convince everyone associated with the program that they could win the conference title, they could beat top-10 teams, and that they could win the national championship.”

Brown’s comments resonated with Swinney, especially when he recalled his playing career at Alabama under Head Coach Gene Stallings. In the late 1980s and early 1990s, Alabama had many successful seasons, but they could not seem to get over the hump and win a conference championship, nevermind a national championship. But in Swinney’s senior season in 1992, the Crimson Tide won every game, including a national-championship-clinching victory over Miami (FL) in the Sugar Bowl.

“Coach Stallings talked about us believing we could win all the time. That was a big part of our success. We won a lot of close games that year, including games against teams that had more talent than we did. There were games that we were outplayed statistically, but we found a way to win. One game we won with a kick return. Another game we won with a big play on defense. We all believed we could do it and that was a big part of it.”

When Swinney returned from Texas, he began the process. It obviously all starts with the team. For the first team meeting in late February, he brought in a sign that simply said “CANT” with the “T” in the word crossed out. He brought it into every meeting over the course of spring practice.

“The sign meant that we can accomplish any goal, but we have to believe in ourselves first.

“After the meeting, it occurred to me that I must have been getting through to the players.”

Believing he can accomplish something against the odds has been a part of Swinney’s life. He came to Alabama as a regular student. While watching games from the stands in 1988, he told friends he thought he could help the team. During that next offseason, the diminutive Swinney, who was far from a star in high school, went through a grueling offseason program with the team. He was one of two walk-ons who survived and was asked to join the team.

In the fall of 1989, he made the team as one of Wide Receivers Coach Tommy Bowden’s cast of pass catchers. In 1990, Bowden left for a coordinator’s position at Kentucky and Woody McCorvey became Alabama’s wide receivers coach. One day at practice in 1990, he brought Swinney over from the scout team. By the 1992 season, Swinney was a consistent part of the Crimson Tide offense that won the national title.

Four years later after serving as a graduate assistant on Stallings’ staff, Swinney overcame long odds in competition against more experience coaches to become a full-time member of the Crimson Tide coaching staff. He served on five Alabama staffs in a full-time capacity, including the 1999 season when Alabama won the SEC title and played in the Orange Bowl.

In 2003 when Rick Stockstill resigned his position as Clemson’s wide receivers coach to become offensive coordinator at East Carolina, Swinney was working in commercial real estate in the Birmingham area. Most thought it would be a long-shot for Bowden to select Swinney as Stockstill’s replacement, because he had been out of the game for two years. But Swinney hit a “home run” on his interview, mostly because he instilled a belief in Bowden that he could do the job.

Now fast-forward to the 2008 season. Even when Bowden resigned on October 13 and Swinney was named interim head coach, most thought it would be a long-shot for him to keep his position past the end of the regular season. But through his “All In” approach to the opportunity and victories over Boston College (who Clemson had not beaten in 50 years), a much-improved Duke program, veteran Head Coach Al Groh and Virginia, and future Hall of Fame Coach Steve Spurrier and South Carolina, Swinney earned the position.

Now Swinney inherits a program that has won consistently. The Tigers have had a winning season in every year of this decade, something only 13 other Division I programs can boast. But the Tigers have not won the ACC Championship since 1991 and have not been to a bowl game that is now considered in the BCS Championship Series since 1981.

Once again Swinney is faced with overcoming some difficult odds. How long it will take him to achieve recently unattainable goals is unknown. But we know he has the right approach and a plan.

“You just don’t luck up and climb Mount Everest,” said Swinney. “You have to get your boots and physically prepare for such a climb. But you have to believe you can do it first.”

Swinney’s “All In” Timeline When Dabo Swinney took over as Clemson’s head coach in 2008, one of his first tasks was to connect his team with the community, both on campus and off. He has been successful in this endeavor on many fronts. Below is a rundown on some of the things he and the Tigers have done in this area since he took over as head coach.

 October 18, 2008 – Began the “Tiger Walk” tradition, whereby the team gets off the bus on gameday at Perimeter Road at the entrance to Lot 5, the parking lot behind the WestZone. The team then walks through the parking lot and greets fans, who line a path for the team. Fans were 10 deep on either side for the entire 200-yard walk.  October 21, 2008 – Invited the Clemson student-body to attend practice the Tuesday of Clemson’s open-date week. Over 700 students attended, and he had three Clemson students attempt a field goal against a live rush, field a punt, and attempt a punt.  October 22, 2008 – Cancelled practice (open-date week) and brought the entire team to a children’s hospital in Greenville to visit young patients fighting cancer.  November 12, 2008 – After a Wednesday night team meal prior to the Duke game, Swinney and team members brought 40 pizzas to students as they waited in line in tents for tickets to the South Carolina game.  November 12, 13, 2008 – Members of the football team registered on the National Bone Marrow Registry in the locker room after practice. Aaron Kelly and his roommate (Trey Robinson) led the drive.  November 14, 2008 – Took the team to Tigerama, Clemson’s homecoming pep rally and entertainment show, in Littlejohn Coliseum the Friday night before the Duke game. Swinney along with Aaron Kelly spoke to the crowd. It was the first time a Tiger football team attended the event.  November 21, 2008 – On the way to the airport for the Virginia game, the team stopped at Clemson Elementary School to visit with children and sign autographs.  November 28, 2008 – Former Clemson President Dr. Robert C. Edwards met the team before it departed for the hotel in Anderson. Edwards was in ill health and had wished Tiger teams in all sports well before they left on road trips. He accomplished his goal with the help of EMS, as he and Swinney greeted just about every player from a stretcher as they walked onto the team buses. Just six days later, Edwards passed away at the age of 94.  July 25, 2009 – Held his Ladies Clinic with a percentage of the proceeds going to breast cancer research and other charities. Over 1,000 women came to the day-long clinic and nearly $30,000 was raised for research.