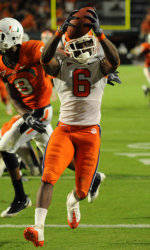 When Clemson and Miami (FL) battle on the gridiron today, an NCAA first could occur. It is a record that Tiger Head Coach Dabo Swinney and Hurricane Head Coach Randy Shannon probably do not want to see happen, because it is a record that will not be good for their respective blood pressures.

Clemson and Miami have gone to overtime in each of the last three meetings and no series in Division I history has had four consecutive overtime meetings. The only other time a series has had three consecutive overtime affairs took place between 2004-06 when Central Michigan and Eastern Michigan played three straight overtime games.

The Hurricanes joined the ACC in 2004 and each of the three meetings between Clemson and Miami since have gone at least one extra session. Clemson won 24-17 at Miami in 2004, then the Hurricanes won in triple overtime at Memorial Stadium in 2005 by a score of 36-30. That is the longest game in Clemson history in terms of overtime periods.

Clemson was victorious over #8 Miami by a score of 40-37 at Sun Life Stadium last season. That victory in Miami Gardens was Clemson’s first overtime victory since the 2004 win over the Hurricanes in the same vicinity, but at a different stadium (Orange Bowl). Clemson has had a streaky history when it comes to overtime games.

Clemson then lost four straight overtime games played between 2005 and 2007, including two games to Boston College that eventually cost the Tigers a spot in the ACC title game each season.

The Tigers’ first overtime game in history took place on November 8, 1997 in Memorial Stadium against Duke. It was actually the first overtime game in history involving two ACC teams. Clemson was playing without all-time leading rusher Raymond Priester, who was injured, and thus had to go to the air. Nealon Greene passed for 272 yards and Tony Horne had four catches for 119 yards and a touchdown, a 34-yard score on a bubble screen with just 6:12 remaining.

The game went into overtime and Duke won the coin toss and elected to go on defense first. The Blue Devils held the Tigers to a field goal by David Richardson. Then on Duke’s possession, Rahim Abdullah intercepted a Bobby Campbell pass on third down and returned it 63 yards for a game-ending score. That gave Clemson a 29-20 win, the Tigers’ largest margin of victory in history in an overtime game.

Clemson’s next overtime game might have been one of the most exciting games in school history (see “The Last Word” on page 112 of today’s program). The Tigers traveled to #9 Georgia Tech, coached by George O’Leary. The Yellow Jackets took a 19-7 lead behind quarterback George Godsey, who had led Georgia Tech to a 31-28 upset of an 8-0 Clemson team the year before.

A key play of the game took place on the last play of the first half. With just 10 seconds left and the Tigers on the Georgia Tech 38, Clemson quarterback Woodrow Dantzler looked to throw a “Hail Mary” pass to the endzone. However, everyone was covered, so Dantzler took off down the field. The greatest running quarterback in ACC history worked his way through the defense all the way to the endzone for the first “Hail Mary Run” in Clemson history. That cut the deficit to 19-14 at the half.

It was a track meet through the entire second half, with both teams putting together consistent scoring drives. It was a bleak situation for the Tigers with under 1:20 left. Clemson trailed 38-34 and had a fourth-and-13 at the Georgia Tech 37. Dantzler faded to pass and decided to go for a touchdown instead of just the 13 yards needed for a first down. To everyone’s surprise, Tiger wideout J.J. McKelvey got behind the defense and was in the clear. Dantzler hit him in stride, and 63 yards later, Clemson took a 41-38 lead.

However, Clemson could not stop Georgia Tech’s offense and the Yellow Jackets tied the score 41-41 on a field goal with six seconds left.

Clemson won the coin toss for overtime and Georgia Tech drove to the Clemson 16. But on third-and-one, the Tiger defensive line stopped Joe Burns, who had scored a winning touchdown against the Tigers on a short run in 1998. Georgia Tech then kicked a field goal on fourth down.

On Clemson’s possession, the Tigers faced a third-and-six from the 11. Again it was Dantzler, this time on a designed run (quarterback draw). He made one move to the right and darted into the endzone, giving Clemson a 47-44 victory. Dantzler was named national back-of-the-week by USA Today for his performance that included 164 rushing yards and 254 passing yards for 418 yards of total offense, still the third-highest figure by a Tiger in history.

Clemson won three straight overtime games with Charlie Whitehurst under center in 2003 and 2004, a record for one Tiger signal-caller. He threw the winning touchdown pass in two of the games. On October 11, 2003, Whitehurst lofted a four-yard pass on a fade pattern to 6’5″ wide receiver Kevin Youngblood, who made a leaping, game-winning touchdown reception to give the Tigers a 30-27 win over Virginia. The game was a matchup of future NFL quarterbacks, as Matt Schaub, now with the Houston Texans, quarterbacked the Cavaliers that day. Whitehurst is now with the Seattle Seahawks.

The next year in the season-opener against Wake Forest, Whitehurst threw a an 11-yard scoring pass to Kyle Browning on Clemson’s second overtime possession to give the Tigers a 37-30 lead. The defense then held the Demon Deacons out of the endzone. It was the first double-overtime victory for the Tigers.

In the middle of the 2004 season, Whitehurst again quarterbacked the Tigers to an overtime victory, this time at #10 Miami. In a game that rekindled National Championship memories for Tiger fans, Clemson defeated the Hurricanes 24-17 in overtime in the Orange Bowl. Reggie Merriweather was the offensive star, as he scored three touchdowns, including the go-ahead score in the first overtime. Tye Hill then batted down a Brock Berlin pass in the endzone on fourth down to give the Tigers the victory.

Miami returned the favor at Clemson the following season in a triple-overtime thriller. Many Clemson fans will tell you Death Valley was never more electric than it was that September 17, 2005 day. Late in the game when Charles Bennett sacked Kyle Wright, the decibel reading in Death Valley was 125, one of the highest on record at any stadium.

Clemson tied the score on a field goal by Jad Dean with just 15 seconds remaining after a third-down pass in the endzone from Whitehurst to an open Chansi Stuckey was a bit long. The Hurricanes had sent the house on a blitz and the strategy made the difference, as they got just enough pressure on Whitehurst to force the incompletion.

The overtime period was one big play after another by both teams. Whitehurst connected with Curtis Baham for a touchdown pass that sent the game into a second overtime. Both teams then kicked field goals in the second overtime. But in the end, it was a 25-yard run by Miami’s Tyrone Moss that proved to be the game-winner and the #13 Hurricanes earned the 36-30 win over #20 Clemson.

Clemson broke the four-game overtime losing streak last year at Miami with the 40-37 victory on a 26-yard touchdown pass from Kyle Parker to Jacoby Ford. There were nine lead changes in the game, the most in a game in Tiger history. DeAndre McDaniel had a resumé game with two interceptions, including a 23-yard interception return for a touchdown that might have been the biggest momentum swinger in a game of momentum changes.

Earlier this season on September 18 at Auburn, Clemson was involved in another overtime thriller. Clemson held Auburn three-and-out on its overtime possession before Wes Byrum made a 39-yard field goal. On Clemson’s possession, it gained a first down and later faced a third-and-five at the Auburn eight. Parker rolled right and spotted Jaron Brown open in the endzone for a potential game-winning touchdown. But the ball was off Brown’s fingertips and fell incomplete. The subsequent field-goal attempt was wide-left and Auburn escaped with the 27-24 win.

Will a new chapter be authored to Clemson’s overtime history today? We aren’t sure about overtime, but a look to the talent on both teams on the gridiron today indicates it should be a very competitive game, one that has a major impact on the final ACC standings in November.