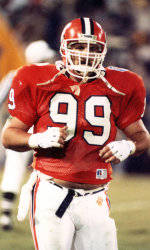 On October 8, I drove to Easley to attend a presentation by Dan “Rudy” Ruettiger to a group of nearly 300 grammar school youngsters. His story is well-known and inspirational, as it is the basis of the 1993 movie “Rudy.”

He was a walk-on at Notre Dame in 1974 and 1975, and I was a student assistant in the SID office at the same time. I worked in the press box during that 1975 Notre Dame vs. Georgia Tech game, so I know his story well.

His story, and the fact that Clemson has 11 scholarship players on the 2010 team who were original walk-ons, made me think about the best walk-on Tigers I have seen.

I am not sure any Hollywood producer will make a movie about one of these former Tigers, but all have made a positive contribution to the heritage of the program.

Steve RyanDefensive Back  1975-78 Steve Ryan was a starter on Clemson’s great teams of 1977 and 1978. He was a First-Team All-ACC pick each year and joins Rob Bodine as the only Tiger walk-ons to earn First-Team All-ACC honors twice as a non-special teams player.

Ryan started his career at North Carolina A&T and transferred to Clemson. A reserve to open the 1977 season, he burst on the scene with 14 tackles and an interception at Georgia Tech.

As a senior in 1978, he helped Clemson to an 11-1 record and a #6 national ranking. The 172-pound free safety led the Tiger secondary with 54 tackles in the regular season, broke up five passes, had two recovered fumbles, and a team-best four interceptions.

Reggie PleasantDefensive Back  1981-84 Do you want to stump someone with a Clemson football trivia question? Who was the last member of Clemson’s 1981 National Championship team to hang up his spikes as a professional football player? No, not “Refrigerator” Perry and not Terry Kinard.

The answer is Reggie Pleasant.

In the spring of 1985, he was drafted in the sixth round by the Atlanta Falcons. He made the Falcons’ roster in 1985, then played for Tampa Bay in 1986. In 1987, he ventured north to the Canadian Football League. He played 10 years in the CFL and was named All-CFL in 1988. He is still the all-time interception leader in the history of the Toronto Argonauts with 47.

David TreadwellPlacekicker  1984-87 David Treadwell will always be remembered for his last-second field goals in consecutive years (1986,87) to beat Georgia. In fact, he finished his career with five field goals that won or tied games inside the last 32 seconds.

Treadwell came to Clemson to study electrical engineering and joined the team as a walk-on in 1984. That year, he practiced in virtual anonymity behind All-American Donald Igwebuike. However, Treadwell kicked a game-winner at Virginia Tech on the game’s last play in his first career contest, and that set the tone for his career.

He was a first-team All-American as a senior in 1987 and went on to a Pro Bowl career in the NFL with the Denver Broncos and New York Giants. He attended law school at the University of Denver and had a career as a sports broadcaster until 2004, when he joined a land development company in Colorado.

Rob BodineDefensive Tackle  1989-91 Rob Bodine might not be considered a pure walk-on, because he started his career as a scholarship player at North Dakota. But after his freshman year, he transferred in and tried out for the team.

It did not take long for Head Coach Danny Ford to realize an outstanding football player had fallen in his lap. Bodine started at middle guard in 1989, 1990, and 1991 and helped the Tigers amass a 29-6-1 record in those three years. As a senior in 1991, the Clemson Hall of Famer recorded 27 tackles for loss, still tied for the most by a Tiger defensive lineman in history, and was named a first-team All-American.

Tommy SharpeCenter  2001-04 In my 33 years at Clemson, there have been very few walk-ons who have gone on to be multi-year starters on the offense line. Tommy Sharpe stands out for his pure toughness and ability to compete with some of the most athletic defensive linemen in the South.

Sharpe came to Tigertown as a walk-on long snapper in the 2000 season and did not see the field until 2002. By the end of that season, he had moved into the starting lineup at center and served in that capacity for quarterback Charlie Whitehurst for all of the 2003 and 2004 seasons.

Sharpe was Clemson’s center in its victory over #3 Florida State in 2003, still the highest-ranked team Clemson has beaten in history. He had eight knockdown blocks in that game.

Thomas HunterTight End  2003-06 About the time Tommy Sharpe graduated, Thomas Hunter entered the scene as a tight end. Hunter played six-man football at a small school near Dillon, SC and actually played against the late Gaines Adams (1993-96) during his high school career.

Hunter played 10 games as a freshman in 2003 and 11 games as a sophomore in 2004, but did not catch a pass those years. In 2005, he started six games and caught 13 passes, then totaled 16 catches for 305 yards in 2006, an outstanding 19-yard average, best by a Clemson tight end with at least 15 catches since Bennie Cunningham played for the Tigers.