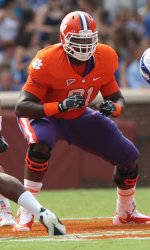 “I will miss playing the games and running down the Hill, but even more than that, going out to eat with the offensive linemen and having fun with the boys is what I will miss most of all,” said Chris Hairston, Clemson’s starting left offensive tackle, when asked about his time in Tigertown.

It has been quite a journey for Hairston, who was not highly recruited out of high school.

Hairston, a graduate of Carver High School in Winston-Salem, NC who was coached by Keith Wilks, was an all-region and all-conference player as a junior and senior. He earned first-team all-state honors at Carver High and played his senior year at the age of 16. With a 3.6 GPA, he was the first Tiger signee from Winston-Salem since Perry Tuttle, an All-American on Clemson’s 1981 National Championship team who first came to Clemson in 1978.

Upon high school graduation, Hairston had offers from Hampton and S.C. State in addition to Clemson. Clemson was the only BCS school to offer Hairston a scholarship.

“I chose Clemson because it was the only chance that I had to play big-time football,” said #61. “Clemson was my only Division I offer. When I came to the game against Florida State in 2005, I saw how big this program is and experienced the great atmosphere.”

“Chris was not highly recruited out of high school, but our staff saw something in him,” said Head Coach Dabo Swinney. “We saw a big body that we thought would develop. He had some speed and agility. But most of all, we saw a smart football player.”

That reputation as a smart player has been enhanced over the years. This past summer, he took the Wonderlic test and scored 35, a score that would put him among the top-five percent of draft prospects at the NFL Combine.

After sitting out as a red-shirt in 2006, Hairston stepped up to the challenge in 2007. His first season on the gridiron resulted in 248 snaps in 10 games, with a career-high 75 snaps in the Chick-fil-A Bowl against #21 Auburn. Other achievements included 16 knockdown blocks, five of which were intimidation blocks.

The 2008 season was a shorter one for Hairston, as he missed two games at the beginning due to a non-football related accident and missed the second half of the Florida State game due to a concussion. Overall, he played 11 games and was fourth on the team in knockdown blocks.

In 2009, Hairston’s third season resulted in a 79-percent average grade, as he missed the TCU game and the majority of the game at Maryland due to injuries. Clemson was 9-3 while he was on the field and 0-2 when he was not.

Hairston was a big reason for C.J. Spiller’s success, as he created many holes for the current Buffalo Bill running back on the way to a record-breaking season. The 2009 Tigers finished the year ranked in the top 25 of the AP poll and won the ACC Atlantic Division title.

Prior to the 2010 season, Hairston was named first-team All-ACC by Lindy’s and Athlon as well as the ACC Sports Media Association. He replaced Thomas Austin (2006-09) as the leader of the offensive line.

“I still try to stay in touch with Thomas periodically, because although we are close in age, he seems to have a lot of wisdom and knowledge that has helped me grow up and become a better man,” said Hairston. “When I have any kind of question, he is there for me anytime I need anything. I trust him, because he is a like a brother to me and has always had my back.”

Austin is currently on the practice squad with the New England Patriots.

As far as coaches go, Brad Scott has been the most influential coach in Hairston’s collegiate career.

“Coach Brad Scott has done a good job of not only teaching me how to play football, but helping me become a man,” admitted Hairston. “He has taught me the importance of accountability and how to prioritize the things in life, beginning with God and family. He will always be a very important person to me for as long as I live. He has shown me what it is to be a great husband, father, and coach, three things I want to be in my life.”

In addition to Austin and Coach Scott, Hairston has always looked up to his cousin, Robert Duncan, Jr. “He has been a great role model for me my whole life. He was only able to play football in high school, and when I was able to choose my jersey number (in high school), I chose #74 because that was his high school number. He was an All-American in college at North Carolina Central, where the team won the Black College National Championship.”

“Since I have been at Clemson, I have grown tremendously. I came here when I was 17 years old, not knowing what to expect. I was hoping I was good enough to eventually play on television so all my people back home could see me. This team has become like family to me, and I have met great people since I started playing football.”

Hairston went on to say his favorite aspect of the Tiger program is his teammates. “I have met a lot of guys who I have become really good friends with and I have a lot of stories to tell from meeting those people. I have had the opportunity to go to many different places and see a lot of different things traveling with the team. The experiences I have been able to take from this place are priceless.”

Hairston has been successful on and off the field, as he has already received a degree in business management with a minor in education. He is now a graduate student in pursuit of a master’s degree in management. After he finishes with a master’s degree, he has even bigger plans.

“I want to take a shot at the NFL,” stated Hairston. “Outside of that, I want to coach football beginning at the high school level in hopes of moving on to the collegiate level.”

Hairston has paved the way for some of Clemson’s finest skill-position players. James Davis and Jamie Harper and Andre Ellington have continued the tradition this year thanks in large part to Hairston.

The Clemson coaches believe he will have a chance to open holes for NFL running backs in 2011.

“Chris will have a chance at the next level,” added Swinney. “He is a hard worker who has earned everything he has accomplished.”