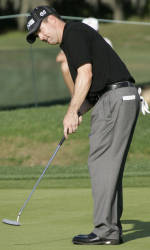 Charles Warren, the only Tiger to win the NCAA Individual Golf Championship, will become the 13th person to be inducted into the Clemson Ring of Honor today. It is the highest honor bestowed by the Clemson Athletic Department.

All the Ring of Honor members made significant contributions to the Tigers’ athletic heritage, but many have unique stories when it comes to their matriculation to Clemson. Football great Fred Cone only received a scholarship offer after Frank Howard’s sister watched him dive into a neighbor’s swimming pool. Women’s basketball great Barbara Kennedy initially came to Clemson on a volleyball scholarship. Football inductee Jerry Butler came to Clemson on a track scholarship.

Warren grew up a South Carolina fan. In fact, his father (C.O. Warren) was the head cheerleader for the Gamecock pep squad when he was in college.

“I grew up a South Carolina fan because my dad had gone to South Carolina,” admitted Warren. “Rodney Williams is one of my close friends today, but I was one of those little kids at Williams-Brice Stadium in 1987 wearing a Mike Hold (former South Carolina quarterback in 1984) jersey and chanting, `Rodney, Rodney, Rodney,’ in the closing moments of that 1987 game in Columbia.”

So something changed Warren’s allegiance from the time he was 10 until he entered Clemson in the fall of 1993. That something was the tradition of excellence of the Tiger golf program under Head Coach Larry Penley.

“If you grew up in South Carolina and played junior golf, you wanted to play for Larry Penley at Clemson,” said Warren. “I wasn’t that highly recruited coming out of high school. When Coach Penley called me and offered me a scholarship to Clemson, it changed my life. I couldn’t go out and buy a Clemson golf shirt fast enough.”

Warren became a starter during his red-shirt freshman season (1994-95). He helped the Tigers to an NCAA Regional title that year and a 14th-place national finish in 1996. However, his performances in the NCAA National Tournament were not impressive. Despite earning third-team All-America honors in 1996, he failed to break 78 in the NCAA Tournament at The Honors Course in Chattanooga, TN. In fact, in his first six NCAA Tournament rounds, he failed to score better than 77.

But his struggles in the NCAA Tournament all changed in 1997. Warren had won the ACC Tournament at Whitewater Country Club in Fayetteville, GA in April of 1997 and finished third in the NCAA Regional at the Cascades Course in Hot Springs, VA in May. So he was on a hot streak entering the 1997 National Tournament at Conway Farms in Lake Forest, IL.

Warren began the national tournament with an even-par 71, then fired a solid 68 in the second round. But in the third round, he shot a disappointing 73 and was six shots out of the individual lead, which was held by Keith Nolan of East Tennessee State. Warren was in fifth place at 212 and was not even Clemson’s top golfer after three rounds. Richard Coughlan, who was the ACC Co-Player of the Year that season, was one stroke better than Warren at 211 and in fourth place.

Warren got off to a good start in that final round, but he thought he was out of the picture when he drove the ball into the water on the par-three 11th hole. But he got up and down after taking a drop to make bogey, and it seemed to give him some momentum.

“I really didn’t have a good idea where I stood during the final round,” recalled Warren. “I do remember thinking the leaders had not run away from anyone. I thought I was still in contention, but then I hooked a drive on the 16th hole into a bunker.”

But all was not lost for Warren, who hit a miraculous shot from that fairway bunker. “The best shot I hit all week was the six iron from the bunker on #16. It hit the flag on the fly and landed just three feet from the pin.”

Warren made the putt and turned a probable bogey into a birdie.

Warren finished the round with a 67, the second-best round of the day by any golfer, and waited for the other leaders to finish. He posted a 279 and was the leader in the clubhouse.

“Since I had started the round six shots off the lead, I finished ahead of the other leaders, including Jason Gore (Pepperdine), who had the lead most of the back nine.

“I remember ESPN doing an interview with me when Jason was in the middle of the fairway on the last hole. He only needed a par to win. I was thinking, `this is a waste of an interview’.”

But Gore hit a wayward second shot on the par five and made a double-bogey. That left Warren and Brad Elder of Texas, who had birdied 15 and 17 coming in, tied for the lead after regulation.

The two players went back to the 18th hole for the playoff. Warren hit a drive down the middle, while Elder hit a poor tee shot. At that point, Warren knew a par would probably win the national title.

“I remember Coach Penley walking the playoff hole with me and convincing me to hit my pitching wedge instead of a sand wedge on that final approach. It was the right call.”

Warren made his par to win the national championship. Incredibly, Warren never had the outright lead in the tournament until he made that last putt in the playoff to win the title.

No Tiger golfer had previously won the national championship and no one has won the title since. Kyle Stanley came close in two of the last three years with second-place finishes, but Warren still holds that distinction.

At the conclusion of the 1997 season, Warren was lauded with first-team All-America and All-ACC honors along with being named South Carolina Amateur Athlete-of-the-Year.

As a senior, he won the Dave Williams Award as the National Senior Golfer-of-the-Year and won his second ACC Championship. He is still the only Tiger to win the conference tournament twice. He finished second in the 1998 NCAA Tournament, missing a playoff by just one stroke. Again, he was named a first-team All-American.

“It is fitting that Charles Warren is the first Clemson golfer to be inducted into the Ring of Honor,” said Penley, who has been the Tigers’ head coach since 1983. “Charles set a standard. He showed his teammates and future Tigers that you can win big tournaments at Clemson, and that we can be a national program. His success helped build the foundation so the program could go to the next level and win the team national championship, which we did five years after he graduated.”

“I played a round with Jason Gore at a PGA Tour event in 2007, the 10-year anniversary, and he asked me before the round if I wanted to replay that day,” said Warren. “It was a life-changing victory because it told me that I could play professional golf. It opened doors for me and is a great item on my résumé.”

Warren has gone on to a successful PGA Tour career. He just completed his sixth season on tour and has won over $4.4 million. But his days in Tigertown certainly stand out.

“Coach Penley has created a great family atmosphere,” continued Warren. “One of the pictures I will always save is the group picture of the players and families at the NCAA Tournament in New Mexico in my last college tournament. It brings back strong memories. I had a tremendous college experience and a great five years. We had great chemistry then and we still do today.”

Warren has been a loyal supporter of the Tiger program, all Clemson athletic programs for that matter, since he graduated. He and the other Tigers on the PGA Tour have a box at Memorial Stadium and attend football and basketball games whenever it meets their schedule.

Few former Clemson athletes have done more for the school since they graduated. Each year, Warren is one of the leaders of the Clemson Golf Gathering, a yearly reunion for the Tiger golf family. He is also significantly involved in the design and fundraising efforts for Clemson’s new golf building. With his passion for Clemson, it is apparent that his induction into the Ring of Honor today has a special meaning.

“It will take a while to digest this, but I have told people that other than winning a Major, this is the greatest honor I could win in my career,” explained Warren. “I am most humbled by this induction. It will probably take five-to-10 years before I really appreciate what it means. I am very appreciative of the opportunity Coach Penley gave me when he offered me a scholarship. This is a remarkable honor.

“The response to my induction into the Ring of Honor has been incredible. Everywhere I go, Clemson people have come up to me and congratulated me. We are talking about people I don’t even know.

“I love Clemson and I look forward to having an impact on this program for the rest of my life.”