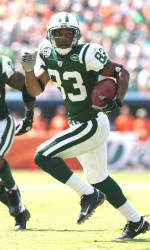 Many Tiger fans remember the day Chansi Stuckey started his first career game as a wide receiver. He had been Clemson’s backup quarterback in 2003, serving behind Charlie Whitehurst. The anticipation was high leading up to his receiver debut in 2004.

Stuckey never faltered and had an impressive eight receptions for 112 yards in the victory against Wake Forest in the 2004 opener. That game was the start of three record-setting seasons at the wideout position.

Others remember his outstanding game against #16 Florida State in 2005. Whitehurst connected with Stuckey for a 22-yard touchdown to put the Tigers up 7-0. In the third quarter with the score tied 14-14, Stuckey caught a 32-yard touchdown pass that gave Clemson the lead for good. In all, Stuckey had 11 receptions for 156 yards and two touchdowns against the Seminoles.

Stuckey would go on to become one of the best wide receivers to wear a Clemson uniform. He had two games with 11 receptions, which tied for second-most by a Tiger in history. In 2005 and 2006, he was the reception leader on the team with 64 and 50, respectively. In 2005, he also was the team leader in all-purpose yards (1,069) and led the ACC in receptions per game.

Stuckey finished his career with 141 catches for 1,760 yards and seven touchdowns. He is seventh in Clemson history in receptions and ninth in receiving yards. Not bad numbers for someone who never played wide receiver until his sophomore season. During his career, he scored touchdowns rushing, receiving, passing, and on a punt return. He is one of just three Tigers in history to score a touchdown four different ways.

So what has Stuckey been doing since his departure in 2006? He has been making a name for himself in the New York Jets’ organization. After being drafted in the seventh round in 2007 by the Jets, Stuckey began to transition to the NFL.

“It is different,” exclaimed Stuckey. “Everyone is more physical, but the biggest thing that is different is being stronger mentally. We have to know so many plays, because defenses can give a lot of different looks. There is no margin for error.”

Furthermore, the native of Georgia had to adjust to the North.

“When I first got up here, I was a little overwhelmed,” admitted Stuckey. “I was in New York and there are a lot more people than what I’m used to. The traffic was bad and parking was hard to find. It’s been growing on me, especially since we’ve moved to New Jersey. Jersey is slower and not a big city. It’s more like where I came from.”

After completing OTAs (offseason training activities) and training camp, Stuckey was prepared for the 2007 preseason. He was in the spotlight at times, as he had 11 receptions for 76 yards and a touchdown. However, his rookie season ended abruptly when he broke his foot in early September. He did not appear in a regular-season game that year.

“It was a tough time,” said the wideout. “I was getting the hang of the offense and looking forward to helping the team win games. After I got hurt, I had to refocus and make sure that my injury healed completely. Then, I worked out so much to get in shape and be ready for the 2008 training camp.”

Stuckey looked impressive at camp this past summer, with internet sites giving him rave reviews for his performance. Soon, he was listed as the third wide receiver in the lineup. This was a feat considering he was on injured reserve for all of 2007.

During the preseason, Stuckey had five catches for 54 yards. These stats were only an inkling of his capabilities. In his first active season, Stuckey has surpassed even his own expectations.

“This season has been great so far,” Stuckey said with enthusiasm. “I’ve learned so much from my coaches and teammates.”

One teammate in particular, future NFL Hall of Fame quarterback Brett Favre, has been instrumental in Stuckey’s success.

“He’s a good guy,” said Stuckey. “I never really thought the trade was going to happen, so I was surprised when he came here. Brett has taken me under his wing. He has helped me with routes. He knows how to spread the ball around. He’s really a jokester and down to earth. He likes to sing and tell stories.”

In the first game of this season, the Jets went on the road to play the Miami Dolphins. Stuckey hauled in the first touchdown of his career against the Dolphins, a squad that included former Tiger teammate Phillip Merling.

“I didn’t think it was going to happen,” recalled Stuckey, who wore #2 at Clemson but now wears #83 with the Jets. “Brett threw it in the endzone and gave me a chance to jump and receive it.”

In games against New England and San Diego, Stuckey had a combined total of 10 receptions for 85 yards and two more touchdowns.

The Jets then played on the road against the Oakland Raiders and suffered a heartbreaking loss in overtime on a 57-yard field goal on the last play of the game. Stuckey had two receptions for 48 yards against the Raiders.

The following week, the Jets defeated the Kansas City Chiefs by a score of 28-24, and Stuckey contributed three receptions for 43 yards. Prior to this past Thursday’s game at New England, Stuckey had 19 catches for 225 yards and three touchdowns in 2008.

While Stuckey has performed well on the gridiron, his biggest accomplishments have come in the community.

“I’ve been blessed with so much in my life,” stated Stuckey. “I want to give back. I want to help families in need and kids who want to play football. I don’t know where I would be without the support of so many people. I want to help kids follow their dreams.”

During the Thanksgiving and Christmas holidays, Stuckey holds food drives with his church. The food goes to needy families in the community. In addition, Stuckey sponsors families during these times. He provides them with food, essentials, and gifts for Christmas.

Stuckey reaches out to children in particular in his community. He hosts a Toys R Us toy drive, where he takes children on shopping sprees. He also brings children to Jets’ games, and they are able to meet players.

A project that is in the works is a summer camp for boys in Stuckey’s hometown (Warner Robins, GA).

Suffice it to say, this Tiger has done many positive things since earning his Clemson degree in 2006. Yet, Stuckey never forgets where he came from.

“I owe Clemson so much,” said Stuckey. “Playing football there was great. The fans and atmosphere are something I will never forget. I made a lot of friends and I’m appreciative of everything I learned on and off the field.”