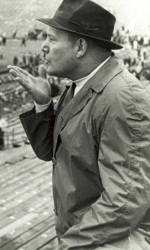 Perhaps one of the biggest fallacies surrounding the Clemson vs. South Carolina football series is that the two teams played every year on Thanksgiving Day. It was called “Big Thursday,” so it must have been played on Thanksgiving Day, right?

The answer to that question is “no.” The two teams have met just one time on Thanksgiving Day, and that was in 1963 when the game that was to be played on Saturday, November 23 was postponed to Thanksgiving Day the next week because of the assassination of President John F. Kennedy (which occurred on Friday, November 22).

So what is “Big Thursday?”

Actually, the “Big Thursday” event could be defined as the annual meeting between Clemson and South Carolina on the gridiron at the South Carolina State Fair during fair week. The fair is still held on the outskirts of Columbia in the area where Williams-Brice Stadium is located today.

Every year, Clemson would travel to Columbia to play the Gamecocks on the third Thursday of October. Customarily in those days, football games would be played while a fair was being conducted in a large town or municipality. The reason for this was to allow droves of people the opportunity to see college football, as travel was not as easy in the early 1900s. Therefore, it would increase attendance, allowing the schools to earn a larger gate for the contests.

In many ways, the Clemson vs. South Carolina game became an official state holiday. It was common that many businesses and workplaces closed due to the approaching game on Thursday.

It also meant a week of reprieve for the cadets at Clemson. In the earlier years, special trains would take the cadets to the state fair and they would camp on the state fairgrounds that week.

It also meant a fashion show for others, as the ladies in attendance would wear the latest styles. Men would wear their Sunday best, as this was the social event of the year for the state. The State newspaper would feature in the next day’s edition who wore what in the latest fashions at the game.

Another tradition surrounding this game was that elected officials, such as the governor and other dignitaries, would sit on the South Carolina side during one half and at halftime, in a non-partisan gesture, move to the Clemson side for the second half. This was a great way to be seen and drum up support for upcoming elections.

About 2,000 people attended the first Clemson vs. South Carolina game in 1896 that was held at the old Elmwood Fairgrounds in Columbia. Admission was 25 cents. For the many people witnessing their first game, The State newspaper ran the following text.

“Football is a gentlemen’s game, rough as it may appear to an outsider. Remember that rain does not stop it…only makes it more amusing.”

It was also announced that the game would begin promptly at 11:00 AM and end before 1:00 PM in order to avoid interfering with the horse races and enable people to return home before dark.

In 1896, about 200 Clemson cadets followed the team to Columbia. During the game, there were intermittent rain showers, and a heavy rain descended after the game. Incredibly, heavy rain did not appear again in this classic until 1944.

South Carolina won the first matchup by a score of 12-6 in 1896. Soon after the first contest, the football game between Clemson and South Carolina took center stage at the State Fair.

Clemson won the next four games by a combined score of 127-6. For reasons unknown, the 1901 game was not played. There was some talk about the game being played on Thanksgiving Day that year, but the plans did not materialize.

South Carolina won five of the next seven games before Clemson’s first All-American, O.K Pressley, and Head Coach Josh Cody arrived in Tigertown in 1927. The Tigers then won the next four games.

In the 1928 game, Pressley made a one-man goal-line stand in the early stages that was probably never equaled in this rivalry or in any other rivalry. He threw the Gamecock ballcarriers for losses of -8, -7, -5, and -7 yards on four consecutive plays to propel Clemson to a 32-0 victory.

In 1946, there were bogus tickets sold and many people watched from the sidelines. Frank Howard said he had to ask people standing in front of him, including a lady with a big hat, what was happening on the field. Statesman and then U.S. Secretary of State James F. Byrnes, who had the best seat in the house, could not see from where he was seated. He was down on his hands and knees on the sidelines trying to watch the action.

In 1948, the Tigers won on a blocked punt by future Clemson President Phil Prince that helped preserve the Tigers’ undefeated season. Oscar Thompson scooped up the blocked punt and ran the ball in for a touchdown to lead Clemson to a 13-7 triumph. The Tigers would later play in the Gator Bowl on January 1, 1949.

For many years, Clemson wanted to end the “Big Thursday” tradition and play a home-and-home series with South Carolina. Clemson announced that it would enlarge Memorial Stadium from 20,654 to 38,000 seats on March 15, 1957. On March 25, 1957, it was announced that Clemson and South Carolina would play in Death Valley on November 12, 1960, ending the 61-year-old state classic known as “Big Thursday.”

On October 22, 1959, the Tigers won the last “Big Thursday” game by defeating South Carolina 27-0. Harvey White led Clemson by completing 8-10 passes for 162 yards and two touchdowns. Tiger fans ripped down the steel goalposts, which were set in concrete, as they celebrated the victory. After the game, Howard went to the top of the stands and blew a big kiss to the stadium, signifying that he was kissing “Big Thursday” goodbye. Clemson “ruled the roost” during the “Big Thursday” era with a record of 33-21-3 in 57 games.

There is no doubt that moving this game has helped Clemson and the surrounding area. Improvements to Memorial Stadium were developed. Two enlargements to the stadium were built, as the West Endzone was built prior to the 1960 season, bringing the seating capacity to 43,000. And with 10,000 general admission seats that were in section GG (green grass), as Howard fondly called the Hill, the stadium could easily accommodate 53,000 fans. It also helped improve the roads around Clemson, as it was reported that one politician pushed to have Highway 123 developed so he could get to Clemson and back to Columbia quicker.

“Big Thursday” may be a day that is long gone from the state of South Carolina’s social calendar. However, it helped develop a rivalry that we still enjoy every fall. This year’s clash will be the 106th renewal of this fall classic, including the 100th consecutive year the game has been played.

Sam Blackman is Clemson’s Senior Associate Sports Information Director and is in his 22nd year at Clemson.