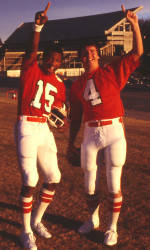 Football in the South is a year-round passion. There is the regular season, spring practice, and recruiting season.

We have reached the point where recruiting season is 365 days a year. Internet sites follow the visits of top prospects all over the country from the time they are juniors in high school until signing day in February.

As sports information director at Clemson since 1989 and as an assistant to Bob Bradley before then, I have presided over a lot of signing days. It has evolved into a very big deal, with official posts on ClemsonTigers.com minutes after we receive a fax confirming a signing in the football office. The day ends with Head Coach Dabo Swinney talking to a large group of supporters about the signing class, complete with video highlights.

For my first signing day at Clemson in 1979, we did not release the names of the class until the end of the week after we had received the letters of intent in the mail. So there was not the drama there is today.

That changed in 1980 when Clemson and Georgia were recruiting Herschel Walker. Walker did not sign on the first day. In fact, it might have been months later before he announced he was going to Georgia. I cannot tell you how many times my phone rang every day that spring of 1980 asking if Walker had signed with Clemson.

Looking back, you can see why there was so much interest, because he led Georgia to the national title in his freshman year (1980) and went on to become one of the great college running backs of all-time. Clemson got back at him in 1981, however, when the Tigers won 13-3 at Memorial Stadium in September and went on to win its own national title. That would be the only regular-season loss of Walker’s college career.

For every Walker, there are many recruiting can’t-misses that ended up missing. I am not going to name any names…you recruiting junkies know who they are.

There have also been even more who came to Clemson as two or three-star recruits and became star players. The best example of that might be the Clemson class of 1987. That class was regarded at the time as one of the best in the nation, and that group went on to lead the Tigers to a great five-year period. The Tigers did not lose more than two games in a year between 1987-91.

But the players who were supposed to lead Clemson to greatness in that class did not reach star quality. However, Doug Brewster, Mike Brown, Jeb Flesch, Levon Kirkland, and Ed McDaniel, players who were not high school All-Americans, all earned First-Team All-ACC honors at some point during their careers.

Just look in the 1987 Clemson football media guide and you will see that Kirkland had the smallest bio in the signee section. He did not even make first-team all-state out of Lamar (SC) High School. McDaniel’s bio was not much longer.

Every signing day, you listen to coaches across the country talk about their recruiting classes, and they all characterize them as, “outstanding…we really filled out needs.”

In reality, it is just speculation. You really cannot project a high school player’s talent level at the next level, especially when it comes to linemen. And we have not even begun to talk about a student-athlete’s ability to cope with the academic side of college life.

Many of the coaches will say, “We will see how good this class is four years down the road.”

That made me think about a way to actually judge those classes down the road. I thought of ways to evaluate a class years after it was signed. How many players became All-Americans, how many became All-ACC players, and how many made it to the NFL? That would give you some way to calculate the talent.

So I compiled some charts and they are included in this article.

A look to the chart that documents the number of players who eventually earned First-Team All-ACC honors shows that seven is the high mark, set by the signing classes of 1975, 1978, and 1981.

The 1975 group had two future Clemson Ring of Honor players in it in Jerry Butler and Steve Fuller along with two-time All-American Joe Bostic. It also had Dwight Clark, who never made First-Team All-ACC, nevermind All-American, but he made first-team All-Pro with the San Francisco 49ers and had his #87 retired by the franchise.

The 1978 class had seven players who earned First-Team All-ACC status at one point in their careers, and five made All-American. Jeff Bryant, Jeff Davis, Terry Kinard, Lee Nanney, and Perry Tuttle all made various All-America teams during the 1981 season.

This class also holds the distinction of having two future College Football Hall of Fame members. Davis and Kinard did not finish at Clemson in the same year, because Kinard suffered a broken arm as a freshman (1978) and received a medical red-shirt, but they enrolled at Clemson together. This is the only ACC signing class in history with two College Football Hall of Fame selections.

Using First-Team All-ACC selections as the barometer for greatness in a class is dominated by classes prior to ACC expansion. You could say that makes sense, because that was a great era of Tiger football. However, it is also a little unfair, because when the ACC expanded to nine and then 12 teams, there was much more competition for those all-conference spots.

Again, the 1975 class wins out with seven former Tigers who made it to the NFL. And this class did not just make the NFL for a “cup of coffee.” Bostic, Butler, Clark, Fuller, and Steve Kenney all played at least seven years in the NFL. Credit Head Coach Red Parker for turning the Tiger program around that year with that class.

It is interesting to note that the 1995 recruiting class signed by Head Coach Tommy West is tied for the most NFL players produced (7). That class included first-round draft picks Antwan Edwards, Trevor Pryce, and Anthony Simmons, one of only two Clemson classes with three first-rounders. The other was the 1978 class with Bryant, Kinard, and Tuttle.

West also signed the class of 1997 that had six players who went on to be First-Team All-ACC selections for the Tigers.

Five Clemson classes have had six players apiece who made it to the NFL. That features three in the 1980s under Head Coach Danny Ford, including his final class of 1989 that was highlighted by Brentson Buckner and James Trapp, who both played at least 10 years in the NFL.

Two of Head Coach Tommy Bowden’s classes (2001,02) had six NFL players apiece, and his 2006 signing class has a chance to join that group as well. Three members of that class (Jacoby Ford, Michael Palmer, Kevin Alexander, Crezdon Butler, and Ricky Sapp are on reserve rosters and could certainly join the list.

It will be interesting to follow the progress of Bowden’s final signing class of 2008. That group was rated #2 in the nation by ESPN.com and had 10 top-150 players, including the #1 overall player in Da’Quan Bowers.

Only time will tell how good those players are.