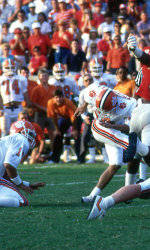 Today is Homecoming on campus, a day that brings fond memories to all Clemson graduates, especially former Tiger football players. Former Tigers who ran down the Hill under the regimes of Frank Howard to Tommy Bowden will be a part of the crowd at today’s game and will have the opportunity to relive some great times in Death Valley. Players on teams spanning eight decades will receive special recognition today as a part of the athletic department’s football reunion program.

Pregame ceremonies will include Al Cameron, believed to be the last living member of Clemson’s 1939 SoCon Championship team that defeated Boston College 6-3 in the 1940 Cotton Bowl. Cameron, father of Clemson Vice President for Advancement Neil Cameron, will make his way down the Hill (with some help) prior to the game. He turns 96 tomorrow and has been doing all kinds of physical preparation for this moment.

It will be a special day for Cameron when you consider he never had the opportunity to run down the Hill as a player. Clemson played at Riggs Field during his entire career, as Memorial Stadium was not constructed until 1942.

Many more teams will be honored today, some in an anniversary year and some who are not.

There is reason to honor Clemson’s 1948 team every year. That squad ran off a perfect 11-0 season, a SoCon title, and a #11 final ranking, Clemson’s second top-20 team in history.

This was a squad led by Ring of Honor member Fred Cone and his hard-driving running style. One of Clemson’s closest victories in that season was a 26-19 victory at Boston College. The season concluded with a 24-23 win over Missouri in the Gator Bowl, the team’s school-record sixth win by a touchdown or less.

Today marks the 50-year anniversary of the 1961 team. That Clemson squad played a tough schedule, with road games at Florida, Auburn, and South Carolina. One of the top victories was registered over Duke in Durham by a score of 17-7. Duke finished the season with a #14 ranking in the coaches poll. Tommy King was a First-Team All-ACC end, while Eddie Werntz was ninth in the nation in punting (40.2) and Elmo Lam was 11th in punt return yards.

The 1973 team will return to campus today. Red Parker’s first team also played a challenging schedule that year, with road games at Georgia, Georgia Tech, and South Carolina and a home contest with Texas A&M. Ken Pengitore was the productive quarterback of the Tigers that year and finished the season 10th in the nation in total offense. That squad also had a sophomore tight end named Bennie Cunningham, who would go on to All-America seasons in 1974 and 1975 and would be the only tight end named to the ACC 50-Year Anniversary team.

The 1986 Tiger team will celebrate its 25-year anniversary, and that was certainly a season to remember. Danny Ford’s team won the first of three consecutive ACC Championships and finished the campaign ranked in the top 20 of all three polls.

The ACC title was clinched in unusual fashion, in fact, in a manner that could not happen today. Clemson and Maryland tied 17-17 in a game played at Baltimore’s Memorial Stadium, but that tie gave the Tigers the title. What Clemson fan can forget the clutch catch by All-ACC tight end Jim Riggs in the fourth quarter?

The 1986 Tigers had a landmark victory at Georgia on September 20, as David Treadwell booted a 46-yard field goal on the last play of the game to send Clemson to a 31-28 win in Athens. That was one of the most exciting games I have witnessed. What a day for All-American Terrence Flagler, whose running and receiving stymied the Bulldog defense. Clemson’s top tackler that day was Norman Haynes, a native of Athens, GA.

The 1986 Tigers finished with an 8-2-2 record and a 27-21 win over Stanford in the Gator Bowl. Rodney Williams was the MVP of that game, the first of two bowl game MVP honors for Clemson’s winningest quarterback in history.

Another signal-caller had a stellar season for the 10-year anniversary team that will return to campus today. Woodrow Dantzler’s 2001 season was one for the recordbooks, as he became the first Division I quarterback to pass for at least 2,000 yards and rush for at least 1,000 yards in one season.

His exploits were worth the price of admission every Saturday. He had perhaps the greatest back-to-back performances by any Tiger in wins over Georgia Tech and N.C. State. On September 29 in Atlanta against the #9 Yellow Jackets, Dantzler ran for 164 yards and threw for 254 yards in the thrilling 47-44 overtime victory. At the end of the first half, he scored on a 38-yard “Hail Mary” run, then ended the game with a six-yard touchdown run in overtime.

We only had to wait two weeks to see him surpass that performance. The Tigers had an open date before a trip to N.C. State. Dantzler gained 517 yards of total offense in a 45-37 victory over Philip Rivers and the Wolfpack. It is the single-greatest Clemson performance I have seen.

Dantzler had 184 rushing yards and 333 passing yards that day. He threw four touchdown passes and ran for two more. It seemed everything Offensive Coordinator Brad Scott dialed up that day worked. Dantzler tied the ACC record for touchdown responsibility and completed 23-27 passes. His passing efficiency was 237.7, the best in school history for a minimum of 25 pass attempts.

So here are these teams of yesteryear back in Tigertown today. They made a significant impact on the heritage of Clemson football. May they enjoy today’s game and witness a 2011 team that plans to make its own impact in Tiger football history. They are certainly off to a good start.