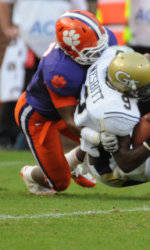 Team Notes * Nine of Clemson’s 12 regular season opponents are bowl eligible, including eight who already have at least seven wins. The nine bowl eligible opponents are the most in one season in school history and the eight opponents with at least seven wins are also the most in one season in school history. * Clemson faced Auburn and South Carolina when they were ranked in the top 25 this year. It just is the second time since 1989 that Clemson faced two regular season games against non-conference teams ranked in the top 25 at the time of the game. Auburn is ranked second and South Carolina is 18th in the AP poll this week. * Clemson played eight consecutive eventual bowl eligible teams between September 18 and November 13, the most consecutive games against bowl eligible teams in school history. * Clemson finished the regular season with a 6-6 record and is bowl eligible for the 12th consecutive season. Clemson needs a bowl win to have an 11th consecutive winning season. The record for consecutive winning seasons in Clemson history is 15, set between 1977-91. * How close was the Atlantic Division race? While Clemson finished with a 4-4 record in the division and Florida State was 6-2, had Clemson defeated Florida State in the regular season the Tigers would be preparing for the ACC Championship game on Monday. A Clemson win over Florida State would have led to a four-way tie at 5-3 between Clemson, Florida State, Maryland and NC State. Clemson would have won that tie breaker with wins over the other three. Clemson lost at Florida State on a 55-yard field goal on the last play, 16-13. * According to the NCAA website, Clemson averaged 75,786 fans per game for seven home contests this year. That is the best in the ACC and 19th best in the nation. This will be the 30th consecutive year Clemson has ranked in the top 20 in the nation in average home attendance. According to the NCAA, Clemson played to 94.4 percent capacity at its home games this year. * Even allowing 29 points against South Carolina, Clemson remains 9th in the nation in scoring defense through games of November 27 with a 17.4 average. Clemson is also seventh in fewest touchdowns allowed, 12th in tackles for loss per game, 22nd in total defense and 24th in pass efficiency defense. * Clemson is third in the ACC in pass defense and fourth in rushing defense, leading to a third place ranking in total defense. Clemson is the only ACC team in the top five in both rushing defense and pass defense. * Clemson is 21st in the nation in net punting, 23rd in punt return defense.

Individual Notes * Freshman wide receiver Roscoe Crosby in 2001, and the best for yardage was 465 by Crosby in 2001. Hopkins has tied the freshman touchdown reception mark. Terrance Roulhac (1983) and Crosby (2001) also had four. * Corico Hawkins had 13 tackles against South Carolina, the most by a Clemson player in a game this year. It was also his career high. He was a big reason Clemson held Marcus Lattimore to 23 rushes for 48 yards on Saturday. * Da’Quan Bowers remains first in the nation in sacks with 15.5 through games of November 27. He has three more sacks than any other player in the nation. He was credited with one tackle for loss against South Carolina and has 25 for the season, just two off the Clemson season record for a defensive lineman. The overall record is 35 by Keith Adams in 1999. He needs one sack to break Adams season sack record (16 in 1999). * Kyle Parker went over the 2000 yard mark for passing yardage this season in the first quarter of the South Carolina game and has 2079 for the season. He has 4,605 passing yards for his career, sixth in Clemson history. His 32 TD passes rank fifth and his 390 completions are fifth. * By playing a couple of plays against South Carolina, Andre Ellington returned to the ACC statistics. A player must appear in 75 percent of his team’s games to be ranked. He is third in the ACC in all-purpose running yards per game, fifth in scoring and sixth in rushing. His 12 total touchdowns are second best in the league and he did it by playing just nine games (including one game he only played three plays). But, when Ellington does not appear in a bowl game (scheduled for surgery in December) he will again drop out of the statistics.