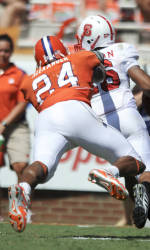 Kevin Alexander’s football story started several years ago in a rural Florida town. He started playing the game during the second grade in his local Pop Warner league as a running back and moved to the defensive side of the ball while still playing running back from third grade to high school.

“If I was not watching Bennie from the stands I would not be playing today,” admitted the younger Alexander. “His success drove me to get out there and play.”

Alexander’s favorite non-Clemson football memory took place during his sophomore year. At the beginning of the season, Union County High was nowhere on the map of the elite teams in Florida. After a season of trials and tribulations, the Tigers slipped into the playoffs, where they went on to make a statement. They won three straight games to advance to the state finals in their division, where they faced national powerhouse Pahokee High School.

“We lost in the championship 21-6, but that season and the team’s never-say-die attitude is something I will never forget,” said Alexander.

When Alexander first visited Clemson on the recruiting trail, he knew that Tigertown was the place for him. “It felt like home. I love the fact that you have to drive to get to places and that you can easily stay out of trouble. You could see that from the time I first came here on my visit.”

All of these reasons helped bring Alexander to Clemson, but a certain conversation with his recruiter helped solidify his decision. “Coach (Dabo) Swinney recruited me. He told me this was my best opportunity to play and make an impact, but most of all he made me feel like Clemson was home.”

He wasted little time making a name for himself as a Tiger. He immediately made a contribution as a freshman in 2006 when he appeared in all 13 games as a key member of the special teams. He also appeared on the field for the Tiger defense in four games.

“The most memorable time during my freshman year might still be my most memorable moment,” said #24. “It was the Georgia Tech game when ESPN GameDay came to campus. That game was like nothing I had ever experienced. The fans were crazy and the atmosphere was electric.”

The Tigers took the field in all purple uniforms for the first time in over half a century and dismantled a talented Georgia Tech team by a score of 31-7. Many Tiger fans would agree with Alexander that it was truly a special day. ESPN’s Kirk Herbstreit called it the best on-campus crowd for GameDay in all the years they had done the show.

The 2007 season saw Alexander move to defensive end, where he appeared in all 13 games. He was the backup to Phillip Merling, who was drafted by the Miami Dolphins following the season. Alexander immediately produced at his new position and registered 32 tackles. His best statistical game of the season came against #19 Florida State in the season-opener when the Sunshine State native tallied three tackles and two quarterback pressures. He was outstanding on special teams as well, leading the team with 13 special teams stops in 2007.

Entering the 2008 season, Alexander was named the starter at defensive end and had a breakout season. He started 10 games and appeared in all 13, tallying 34 tackles on the season. He was named defensive player-of-the-game by the coaching staff for the Wake Forest game after registering six tackles and two tackles for loss.

When Ricky Sapp was injured at Virginia, Alexander played both the defensive end and bandit end positions for the final games of the season, including the South Carolina contest when he played a career-high 51 snaps. He recorded at least one tackle in every game while once again showing his versatility by playing a key role on special teams, where he was tied for third on the team with 10 special teams tackles.

Alexander was presented with an interesting opportunity when Defensive Coordinator Kevin Steele was hired prior to the 2009 season. The senior was asked to move from defensive end to linebacker in certain formations during fall camp.

“We moved Kevin to linebacker because we wanted to get the best 11 players on the field,” said Steele. “Kevin has great versatility, size, and strength to do the job at both positions. So he is listed at both defensive end and strongside linebacker. He will be a big key for us this season.”

Alexander is listed as the starter at strongside linebacker and the backup at defensive end behind Sapp. Depending on the formation and personnel on the field, one could see Alexander at either position on any play.

In the season-opener against Middle Tennessee, he tallied a team-high two tackles for loss, including a sack. Alexander has now recorded a tackle in 28 consecutive games in a Tiger uniform dating back to the 2007 season. With his new role in the defense clearly defined, Alexander is ready to make the most out of his last season in a Tiger uniform, not only individually, but for his teammates, friends, family, and fans that have always supported him.

Alexander has appeared in all 41 games the Tigers have played during his career. In these past three seasons, the Tiger defense has finished in the top 25 in the nation in both scoring defense and total defense, and there is no doubt that he has played a role in those numbers.

His ability to play a variety of positions at a high level and his team-first attitude has made him a valuable contributor to not only the defense, but the Tiger football program as a whole. In his three years, Alexander has steadily improved into one of the Tigers’ strongest and most physical defensive players. His bench press of 470 pounds is second-best on the team, including best by a defensive player.

Alexander’s mix of strength and speed has made his versatility a valuable asset to the new defensive schemes. He has set goals for the 2009 season that he believes are obtainable by both he and his teammates.

“I want to go out there and play every game like it’s my last,” he exclaimed. “I want to know when I leave that stadium for the final time that I have left everything on the field.”

Four years after recruiting Alexander, Swinney has nothing but praise for the talented 6’4″, 265-pound Tiger. “Kevin has been a dependable player for us for four years. We have asked him to be a top player on special teams, and he has led the team in special teams tackles. Now we are asking him to play two different positions and he has taken on those responsibilities. He is one of the leaders of our defense.”

When it comes to life after football, it is no surprise to learn that Alexander is just as versatile in life as he is on the field. As with most college athletes, their goal is to play at the professional level. This is also the case with Alexander, but he realizes that there is a life outside of football and has focused himself in the classroom as well.

Alexander was named to the academic honor roll for the 2009 spring semester. His ability to juggle his school and football responsibilities while excelling at both is a testament to his work ethic. When the 2009 season comes to an end, he is slated to graduate with a degree in sociology.

When Alexander leaves Clemson, he may not be a player who rewrote the defensive recordbook. However, if there was a recordbook for hard work, passion, and versatility, he would be at the top of all those charts.

Heath Bradley, a senior from Piedmont, SC, is a student assistant in the Clemson Sports Information Office.