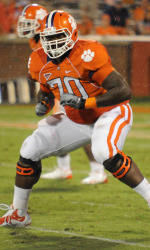 The offensive line of any football team is an essential unit to an offense. An integral part of Clemson’s offensive line is guard and tackle Jamarcus Grant. Having seen playing time in most of the past four seasons, he is a name that Tiger fans are familiar with when the offense takes the field. To Grant, there is nothing more important than his team.

Grant first played football in third grade, but it was in middle school where he first realized that his size gave him a big advantage. Playing at Mullins (SC) High School, a small school east of Florence, left Grant to pick up the slack at several positions.

“I played right tackle, defensive end, defensive tackle, and I kicked off and punted. In high school, it was simple…our squad had about 25 players.”

When he came out of high school, Grant was rated as the #56 offensive lineman in the nation by College Football News. He also earned other honors such as being named to the All-Zone team, a two-time all-state pick, PrepStar All-American, and all-region along with participating in the North-South All-Star game.

Upon arriving at Clemson, Grant was dubbed “Jumbo” by his teammates, a nickname that has stuck with him to this day.

“When schools were recruiting me in high school, I was playing at about 280 pounds,” he recalled. “Then I blew out my knee in the first round of the playoffs during my senior year. When I got here, I weighed around 360. I think it was Nathan Bennett who said, `We’re going to start calling you Jumbo!’ I hated it with a passion at first, but now everyone knows me as `Jumbo.’ I’m not 360 pounds anymore, so it’s cool.”

In 2006, Grant began his playing career in Tigertown, three games after the season-opener due to a broken foot that he suffered before camp began. That year, he played a season-high 22 snaps against Temple and recorded 2.5 knockdown blocks.

In 2007, Grant saw action in nine games, though he played behind former Tiger All-America offensive guard Chris McDuffie. His best game came in the contest with Central Michigan, where he played 18 snaps and had a 75-percent grade with 1.5 knockdowns.

The 2008 season was an improvement for Grant, who again played nine games, including a start in the season-opener versus #24 Alabama. His season-best grade came against S.C. State (73 percent). Grant also played 14 snaps with a 72-percent grade and had eight knockdown blocks versus Duke.

Outside of football, #70 has faced his share of obstacles. “I’ve had a few bumps in the road. During my freshman year I had to bury three family members and a friend. In my red-shirt freshman year I broke my foot a week before camp, so that hindered me. Then my home burned down in 2007. I was in the house when it burned down and I got burned on the back of my legs. We lost everything, but things are good now.”

Grant credits his position coach and his teammates for helping him persevere through such a difficult time.

“I didn’t expect my teammates to do what they did,” admitted Grant. “They raised money for my family and me. That is one of my most memorable moments at Clemson. I will never forget that.

“I actually didn’t want to come back to school, because I felt that it was my problem and what had happened was my fault. I felt I was the one who had to take care of it. I talked to Coach (Brad) Scott, and he told me that from day-one they were my family away from home. They really embraced me, and I’ll never forget that.”

Scott and the other members of the offensive line have especially supported Grant during his career at Clemson.

With the 2009 season underway, Grant and the Tigers have a whole new attitude. When he says he will do whatever it takes for the team this year, the conviction in his voice lets you know that he truly means it.

The second game of the season at #13 Georgia Tech was a great learning experience for Grant and the Tigers. Though the outcome was a narrow defeat, he believes the effort the Tigers put forth is something indicative of their mindset this season.

“That game really showed me a different team from the past. I believe that Coach (Dabo) Swinney has really instilled in us the power of belief. And because of that, everyone is `all in.’ I don’t think we would have come back out of the locker room the way we did had he not been `all in.’ He is a great motivator. We have a chance to do something special this year.”

Grant will do something special this year when he graduates in May with a degree in sociology. He then plans to go on to graduate school to pursue his dream of becoming a college football coach.

His memories of Clemson, however, are not something that will be forgotten, namely the moments he has shared with his fellow Tigers. “I love being with my teammates. When I’m gone, that’s going to be the one thing I miss more than anything else…being with my teammates and being able to share those ups and downs with them.”

Grant has the remainder of the 2009 season to continue to do `whatever it takes’ for them and the rest of the Clemson football family.