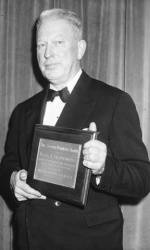 How big of a story would it be today if Clemson Head Coach Tommy Bowden resigned at the end of the 2007 season to become a reserve outfielder for the New York Yankees under future Hall of Fame Manager Joe Torre?

A ridiculous scenario? Bowden is in great shape at age 52, a daily runner of about six miles regardless of weather conditions, but it would be a bit far-fetched in 2007.

But 100 years ago, that is what Clemson’s head coach did. At the conclusion of the 1907 season, Head Coach Frank Shaughnessy resigned to take a roster spot with the Philadelphia Athletics, a team coached by legendary Hall of Fame Manager Connie Mack, still the winningest manager in Major League Baseball history.

Shaughnessy was 24 at the time and was just three years removed from a noteworthy three-sport monogram career at Notre Dame. In fact, he had already played in a Major League game with the Washington Senators before he became Clemson’s head coach. He played a full minor league season in which he hit .352 for Ottawa in the AAA International League in 1906. That was just six months before he became Clemson’s head football coach.

Shaughnessy will not go down in Clemson history as its greatest coach…not by a long shot. He coached Clemson for just one season, and the Tigers finished with a 4-4 record.

However, Shaughnessy had, by far, the most well-rounded sports career among the 24 men who have held the head football coaching position at Clemson since the athletic program began in 1896. It is a resumé that demonstrates a significant contribution to the heritage of professional baseball, college football, and even the National Hockey League.

Shaughnessy was born in Amboy, IL and enrolled at nearby Notre Dame during the fall of 1901. He majored in pharmacy and earned his degree in May of 1905. Shaughnessy also took law courses and eventually earned his law degree in 1908.

Shaughnessy played baseball, track, and football at Notre Dame, serving as captain of the football team in 1904. He was a three-year starter as a 178-pound end who played both ways. He was also a four-year letterman at Notre Dame, just the 10th player in school history to play on four different teams.

That 1904 Notre Dame team finished with an undistinguished 5-3 record under Head Coach Red Salmon, but Shaughnessy did set an Irish record, one that will never be broken. On November 5, 1904 at Kansas, he intercepted a mid-air fumble at his own three and raced 107 yards for a touchdown. (Yes, 107 yards because 100 years ago, the gridiron was 110 yards long.) It was Notre Dame’s only score (touchdowns were five points then) in a 24-5 loss.

That is still in the Notre Dame recordbook as the longest play of any kind in school history.

Years later when talking about the play, Shaughnessy said, “I remember I had a broken collarbone from the week before (a win over Toledo) and figured I had to run as fast as I could to keep from getting killed.”

Shaughnessy had three broken collarbones during his Irish football career, so he decided baseball might be his best career path. In the summer of 1905, he signed a professional baseball contract with the Washington Senator organization and made it to the Majors for one game in 1905.

He played minor league baseball in Ottawa, Canada in 1906, his first experience of many in Canada. In the fall of 1906, he secured a position as head coach at Welsh Neck High School in Hartsville, SC. Tiger Head Coach Bob Williams took note of his football experience and asked him to come to Clemson the week of the Georgia Tech game to help the Tigers prepare for John Heisman’s team.

Clemson upset the Yellow Jackets 10-0 in the final game of the 1906 season, a big victory in a rivalry, as strong then as it is today because Heisman had left Clemson suddenly after the 1903 season to become the head coach of the Yellow Jackets. That 1906 Tiger victory concluded an unbeaten (4-0-3) season. Clemson administrators at the time were impressed with Shaughnessy’s impact on the team that week and offered him the head coaching position when Williams resigned after the conclusion of the 1906 season.

Shaughnessy accepted the Clemson head coaching position and also agreed to be the head baseball coach, a common practice in that era.

He started fall football practice on September 14, 1907, just 14 days prior to the season-opener against Gordon. (Clemson has played two games and completed practice for a third by that date in 2007). The Tigers won that first game 5-0, then they defeated Maryville 35-0 on October 9.

A Tennessee team that would end the season with a 7-2-1 record defeated the Tigers 4-0 before Clemson came back with a 15-6 victory over North Carolina. That North Carolina game was played in Columbia, SC as part of State Fair week. That might have been the biggest victory of the season, as North Carolina had been rated among the best teams in the Atlantic Coast area along with Virginia.

Clemson’s final victory that year came on Thanksgiving Day in Atlanta, a 6-5 win over Georgia Tech. Clemson kicked a game-winning conversion after a controversial touchdown off a blocked kick.

On December 20, 1907, Shaughnessy announced that he would stay another year as Clemson’s head football coach and continue to coach the Tiger baseball team. But before he coached the baseball squad in the spring of 2008, he signed a new baseball contract with the Athletics, where he played eight games for Mack’s team.

Shaughnessy hit an impressive .310 in his limited action as a reserve outfielder with Philadelphia. Among the players he played against was Hall of Fame Detroit Tiger and future all-time hit leader Ty Cobb. Despite the solid stats as a reserve outfielder, Mack decided to trade Shaughnessy for a minor league player named Frank “Home Run” Baker, who would go on to lead the American League in homers four times and play in six World Series. Baker was inducted into the baseball Hall of Fame in 1955. Nothing against Shaughnessy, but Mack knew what he was doing.

Shaughnessy ended his playing career when he was traded to a minor league team, and then he went into coaching and administration, working in three different sports during the next 50 years.

His most interesting coaching year was probably in 1915. That year, McGill did not have a football team because of World War I. He was asked to serve as the manager of the Ottawa Senators of what is now the NHL.

“I really knew nothing about hockey, but I took the job,” said Shaughnessy years later.

He must have learned something, as he coached Ottawa to the finals of the Stanley Cup before losing to Vancouver. Shaughnessy’s son would later play for the United States Olympic Hockey team in 1936.

He continued to coach the McGill football team and minor league baseball for most of the time period between 1919 and 1936. He had a time of service for the Canadian army in World War I. He had a 1,148-1,012 record as a minor league manager over a 27-year period. He coached the McGill football team until 1927, including a game against Syracuse in 1921 when the forward pass was first introduced to college football in Canada. In 1928, he spent the summer as an assistant coach of the Detroit Tigers.

After coaching at the minor league baseball level for 27 years, he was named president of the International League (AAA), the highest level of professional baseball in the minor leagues. He held that position between 1936-60. Prior to his taking over the presidency, he invented a playoff system that is used by most professional sports leagues to this day. At that time, only the two best teams in each minor league faced off against each other for the title.

Shaughnessy thought it would hold interest during the season for more players and more fans, for that matter, if more teams could get into the playoffs. He adopted the Shaughnessy Playoff System for the International League that allowed four teams, just under half the league, to earn spots in the playoffs.

He proved to be prophetic in a 1957 article when he said the Major Leagues would some day split into divisions and have a playoff system where four to eight teams were involved. The Major Leagues finally adopted the same theory in 1969 when it divided into divisions, and years later when the “Wild Card” was added. Other sports followed suit. Just think, the two-month-long NBA playoffs probably started with Shaughnessy’s innovation in 1933.

Shaughnessy’s most important contribution during his career as president of the International League took place in 1946 when he joined with long-time friend and co-worker Branch Rickey in facilitating Jackie Robinson’s move into professional baseball. Shaughnessy had worked for Rickey in the Dodger organization as a minor league coach in Syracuse.

So when it came time to place Robinson in the minor leagues prior to his move to the parent Dodger club, he was assigned to Montreal, an International League team. Rickey knew that Shaughnessy would look after Robinson in his pursuit of becoming a Major League player.

Shaughnessy was quoted as saying of Robinson in 1946 when he first came into his league, “He’s the best player in minor league ball…and also the smartest. I see where some people don’t think he will hit because he didn’t hit Bob Feller on a barnstorming tour. How many hitters have any success against Feller? I’ll put my money on Robinson.”

That public support helped move Robinson along, and he was in the majors to start the 1947 season. Shaughnessy also made sure there were no player revolts at the minor league level. Robinson went on to be the 1947 National League Rookie-of-the-Year, and the rest is history.

Shaughnessy retired from the International League presidency in 1960 when the Montreal franchise folded, forcing the league office to move to New York. “Shag” did not want to move back to the big city at age 76, so he retired. But in his retirement, he stayed active, influencing policy as much as possible. Many baseball historians believed he had an impact on the Major Leagues’ expansion into Canada in 1969.

Shaughnessy lived until the age of 86, when he died of an abdominal aneurism in Montreal. He had been in poor health the last couple of years of his life and had to have his right leg amputated as the result of a circulatory problem in 1967.

As you can see, Frank Shaughnessy was a renaissance man, perhaps the greatest in Clemson sports history. The next time you want to stump someone with a trivia question, reread this article. How many people have set a Notre Dame football record that will never be broken, served as head coach of the Clemson football team, played Major League baseball against Ty Cobb, coached in the Stanley Cup Finals, and had a major hand in breaking the racial barriers of professional sports?

Tim Bourret is Clemson’s Sports Information Director and is in his 30th year at Clemson.