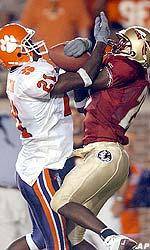 *Chosen for a postseason bowl for the fourth straight year, the first senior class to go to a bowl game all four years since the seniors of 1991.

*Tommy Bowden became first Clemson coach to lead the Tigers to a bowl game in each of his first four years with the program.

*Clemson’s appearance in the Tangerine Bowl was its 15th bowl game since 1985. Clemson ranks sixth in the nation as far as bowl appearances since 1985.

*Defeated rival South Carolina 27-20 in the regular season finale, the third time in the last four years that Clemson has defeated South Carolina.

*Eighteen former Clemson players were in the NFL in 2002, including Pro Bowl players Brian Dawkins and Trevor Pryce. Nine of the former Tigers in the NFL were either first-round draft choices, Super Bowl Champions or have been named to the Pro Bowl at some time in their career.

*Twelve players on the 2002 team had their degrees when the team attended the Tangerine Bowl. Clemson’s 1996 entering class had a 82.4 graduation rate, including 9-9 among African Americans.

*Clemson made 11 television appearances in 2002, including eight games that were shown on ESPN. Clemson has now been on live television 39 times the last four years, more than any four-year period in school history.

Team Accomplishments *Three different Clemson receivers (Derrick Hamilton, Kevin Youngblood) ranked in the top 100 in the nation in reception per game, a first in school history. All three players had at least 50 catches, also a first in Clemson history.

*Clemson had two 1500-yard passers (Charlie Whitehurst and Willie Simmons) on the same team for the first time in school history. Both players also completed at least 120 passes, also a first in school history.

*Clemson completed 58 percent of its passes in 2002, the fifth best single season figure in school history.

*The Tigers threw for 3157 yards in 2002, a single season record. Each of the top four passing yardage seasons in school history have taken place under Tommy Bowden.

*Clemson gained 434 yards of total offense against South Carolina, the high figure against the Gamecocks in 15 games.

Individual Accomplishments *Justin Miller was named a unanimous first-team Freshman All-American as a cornerback. Among the organizations that named him first-team were The Sporting News and the Football Writers of America.

*Brian Mance was named a fourth-team All-American by The Sporting News. He finished his career with 12 interceptions, third best in Clemson history.

*Nick Eason was named first-team All-ACC as a defensive tackle. He finished the season with 63 tackles, including seven sacks.

*Bryant McNeal finished the season with nine sacks and finished his career with 22. His career total ranks fifth in school history. He is tied with current NFL player Brentson Buckner, and is just ahead of All-Pro lineman Chester McGlockton.

Team Accomplishments *Had two of the top 11 tacklers in the nation. John Leake finished seventh, while Rodney Thomas was 11th. Both players went over 160 tackles, the first time in school history two players on the same team had at least 160 tackles.

*Clemson had the top two interception leaders in the ACC and two of the top 25 in the nation in Justin Miller and Brian Mance. Miller ranked fifth nationally and Mance was 21st.

*Clemson improved its total defense average by 40 yards per game over the 2001 season.

*Four different Clemson defensive players were invited to postseason all-star games. Nick Eason was named to the Senior Bowl in Mobile, AL, while Rodney Thomas were invited to the Rotary Gridiron Classic in Orlando.

Individual Accomplishments *Placekicker Aaron Hunt finished 18th in the nation in field goals per game and was a semifinalist for the Lou Groza Award. Hunt was also named an honorable mention All-American.

*Hunt moved into fifth place on Clemson’s career scoring list. He also became Clemson’s career leader in extra points (126). He had a streak of 12 straight made field goals at one stretch, second longest streak in Clemson history.

*Justin Miller was the ACC Kickoff return champion with an average of 35.1 yards per return. The average was an all-time Clemson record. He returned a kickoff 80 yards for a score against NC State on his first career kickoff return.

Team Accomplishments *Clemson ranked fifth in the nation in kickoff return average with a 24.3 average. It was the second straight year Clemson has ranked in the top 10 in the nation in that category. The #5 ranking was Clemson’s highest team ranking in any category since 1995.

*Clemson recovered an on-side kick at Florida State, the first time the Tigers have done that since 1979.