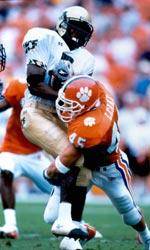 Clemson, SC – Clemson Head Coach Tommy Bowden has announced a two-deep prior to the beginning of spring practice. The Tigers return 49 lettermen and 14 starters (including the punter and placekicker) from last year’s team. The returning letterman total includes four players who lettered in 2000, but missed the 2001 season due to injury or red-shirt.

Bowden has announced four position changes from last year. Running back Terrance Huey has been moved to cornerback, while Mark Jetton has moved from defensive line to offensive guard. Tight end Todd McClinton has moved to the defensive line. Altroy Bodrick, who missed last season with a torn ACL, will move from linebacker to strong safety. He will not go through scrimmages this spring due to the injury, but should return to full strength in the fall.

“We feel the position changes are in the best interest of the team and the players involved. We have discussed these changes with each player. They have been moved to positions that will give them a chance to see more playing time.

“In the cases of Jetton and McClinton they both move into second-team roles with a chance to help us immediately. Both are outstanding athletes. We will look at McClinton at both a tackle and end position this spring. He is too good an athlete to keep on the sideline.”

Clemson is scheduled to begin spring practice on Saturday morning, March 2 at 10:00 AM. However, rain is predicted for the Clemson area on Saturday and practice could be cancelled. That decision will not be made until 9:30 AM. If the practice is postponed, the first practice will be held Monday afternoon. Spring practices are open to the public, but fans must stay within designated areas at the practice field.

Clemson will hold the NCAA mandated 15 practices this spring, leading up to the Orange and White game at Riggs Field on April 6, at 1:00 PM. This will be the first football game held at Riggs Field since November of 1941. Clemson Memorial Stadium’s Frank Howard Field is being renovated this spring and will not be finished in time for the Spring Game.

An announcement on ticket availability for the spring game will be made at a later date.

Clemson Notes: Four players are back on the depth chart who missed last season…Altroy Bodrick (3-year letterman at linebacker) missed last year with a torn ACL and will begin his comeback as a strong safety…Keith Kelly lettered as a reserve running back in 2000, but was held out last year in order to red-shirt…he returns to compete with Bernard Rambert for the starting tailback position….Kevin Youngblood, who averaged 17.5 yards on 12 catches in 2000, also returns after suffering a broken leg during preseason practice last year…Ronnie Thomas, who lettered in 2000, returns as a wide receiver after red-shirting last year…Clemson returns eight starters and 22 lettermen on defense…18 of the top 24 listed on the two-deep are slated to return for 2003 as well…Clemson has just four returning starters on offense and must replace four of the five starters on the offensive line, including All-American Kyle Young, who has started the last 40 games at Clemson…there are three players on the Clemson two-deep who already have their academic degrees: Nick Eason (DT), Jackie Robinson (WR) and Nate Gillespie (OT)…quarterback Willie Simmons is slated to join them in May…while Clemson has just four returning starters on offense, there are nine returning players who played at least 200 snaps in 2001…Clemson has the most depth at wide receiver where nine lettermen return led by sophomores Derrick Hamilton, Roscoe Crosby, and Airese Currie…tight end Ben Hall is another talented returning sophomore…all four of those sophomores scored a touchdown in Clemson’s Humanitarian Bowl win over Louisiana Tech…Clemson returns both its starting punter and placekicker in the same season for the first time under Bowden (1998 was the last season that both returned)…of the 50 players listed on the depth chart below, 13 are seniors, 15 are juniors, 15 are sophomores and seven are freshmen…of the 24 starters (including punter and kicker) 10 are seniors, eight are juniors and six are sophomores…no freshmen are listed as starters at this time….after the summer break, Clemson freshmen will report on August 3 and the varsity will report on the night of August 7…the first day of practice for the full team will be August 9 with the first day of practice in full gear coming on August 13…the first day of classes at Clemson for the 2002-03 academic year is August 21 and the first game will be at Georgia on August 31.