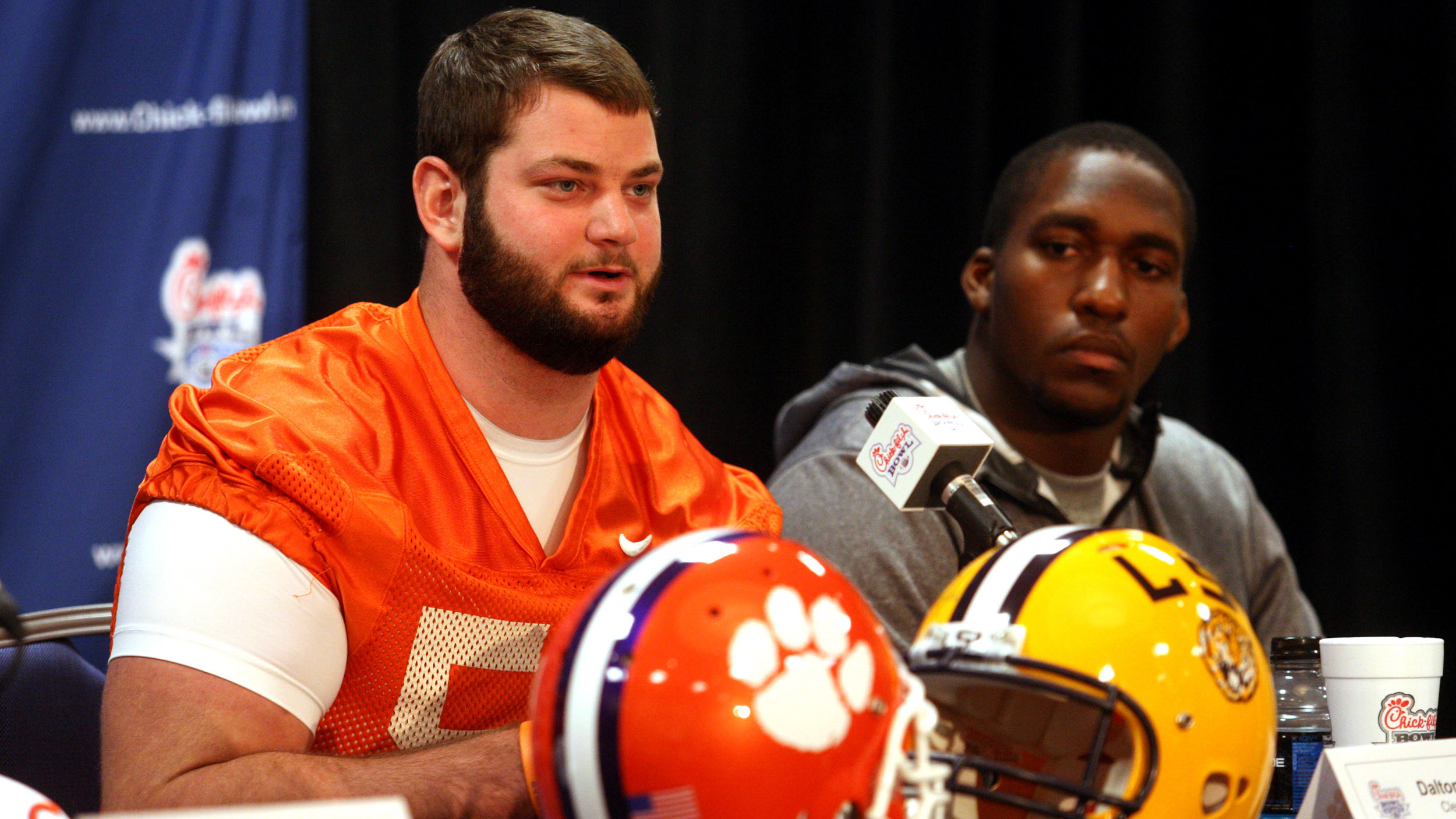 ATLANTA, GA – Only six college football teams in the country have been ranked in 28 consecutive polls, and two of them – Clemson and LSU – will square off in the Chick-fil-A Bowl on New Year’s Eve at the Georgia Dome.

At a news conference ahead of the game at the Sheraton Atlanta Hotel on Friday, Clemson head coach Dabo Swinney and two of his seniors, center Dalton Freeman and defensive end Malliciah Goodman, were on hand to discuss the matchup.

Asked the secret to his team’s consistent success, Swinney turned the credit to the two players seated next to him at the press table, along with the Tigers’ other nine seniors, most of whom were part of Swinney’s first recruiting class at Clemson.

“We’ve come full circle. Regardless of what happens in this game, these seniors have been a special group,” Swinney said. “So, I’m really proud of them. They came here at a time when it wasn’t real sexy to come to Clemson. And Dalton was one of those guys that was stuck here and came here for something else and now he’s going to have to play for this Swinney guy. And I personally recruited Malliciah, and he was already committed and then all that stuff happened and I ended up getting the job.

“I’m very thankful to all those guys for choosing to stick with us. … And four years later it’s very fulfilling to see the progress that we’ve made. If the guys don’t believe, you have no chance. And these guys have chosen to believe in our program.”

Following the news conference, the No. 13 Tigers (10-2) practiced on the turf of the Georgia Dome, the site of Monday’s game, for a third and final time prior to the bowl.

“It’s very seldom you get to practice where you’re actually going to play the game,” Swinney said. “Most of the time you don’t even get to see the stadium. You have to stay on the outside because they’ve got it all painted and nobody can touch anything. To actually go and practice each day in the Georgia Dome is great.

“I think it’s brought a lot of energy to our practice, and it helps these guys visualize what they want to do on game day.”

Clemson will move to the indoor facility at Georgia Tech for practice Saturday and then hold a walk-through at the team hotel, the Marriott Marquis Atlanta, on Sunday.

Of course, the bowl week hasn’t been all work and no play. The teams competed in Go-Kart racing at Andretti Indoor Karting & Games in Roswell, Ga., on Thursday night after visiting the children’s hospital at Scottish Rite that afternoon.

The two teams were set to square off in an eating contest at Sal Grosso Brazilian Steak House in Atlanta on Friday night to continue the Battle of the Bowl Week, a competition in which Clemson held a 2-0 lead after beating LSU in a basketball shooting contest and the Go-Kart racing.

“We have to remind ourselves we’re not in a BCS game,” Freeman said. “We were very blessed last year to play in a BCS game, but everything that the Chick-fil-A Bowl has done for us has just been first-class. It’s probably the best bowl game I’ve ever been associated with.”

The matchup on the field certainly lives up to that billing as well. The game will be the first meeting of two 10-win teams – as both enter with 10-2 records – in 45 installments of the bowl game.

And at No. 7, LSU will be the highest-ranked team Clemson has faced in a bowl game since the 2003 season when the Tigers upset sixth-ranked Tennessee in the Chick-fil-A Bowl.

With only one practice left before the game, Swinney said he was pleased with how his team had prepared for the matchup with one of the nation’s elite programs.

“The season’s over and you have basically a month to get ready for a new opponent, and you try to develop a plan to best prepare your team,” Swinney said. “It’s been very physical, but if you watch LSU play, that’s how they play the game. Their style of play is a little bit different.

“People get caught up that you have to be in the I-formation to be physical, but that’s the furthest thing from the truth. … We have elements of everything in our offense, and we pride ourselves on being a very physical football team. We do it a little bit differently than maybe LSU, but you have to prepare you team for what they are going to see.”